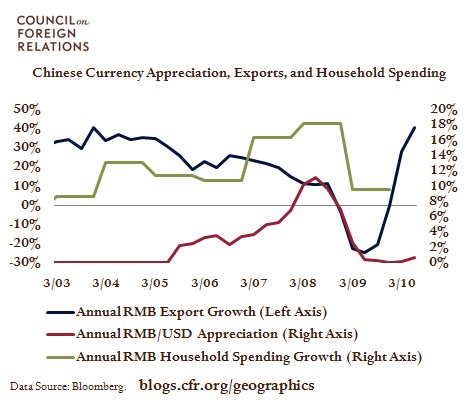 China will hit a “growth wall” within the next three years, according to NYU economist Nouriel Roubini. The country’s reliance on fueling GDP growth through exports is unsustainable. He argues that China needs to revalue its currency so as to allow a transition from export-led to domestic demand-led growth. “The real income of households is going to increase, and they’re going to consume more. You export less and you consume more.” Is he right? Though there are more ways than one to skin this cat - domestic reforms that would facilitate faster rising Chinese wages, as advocated by Stanford economist Ronald McKinnon, are one way to fuel greater household spending – the data do indicate that Roubini is correct. As this week’s Geo-Graphic shows, when the renminbi appreciated significantly between 2005 and 2008 Chinese export growth slowed and household spending growth rose. This trend reversed after the pace of appreciation subsequently fell dramatically. This suggests that the Chinese government’s most recent five year development plan, which states that the government “must persist in the strategy of expanding domestic demand and maintaining steady and relatively fast development,” should include currency revaluation as a component policy element.