Methane emissions from natural gas extraction have been getting a lot of attention in recent months. The latest contribution is a forthcoming paper in Climatic Change by Tom Wigley and colleagues at NCAR that has been attracting considerable attention. It models a scenario in which much of the world’s coal consumption is replaced by gas and finds that near term temperatures increase a little bit while longer term temperatures (beyond a few decades) are only slightly lower (see the figure below). It thus concludes, as several others have, that replacing coal with gas is at best a waste of time, and potentially even bad. 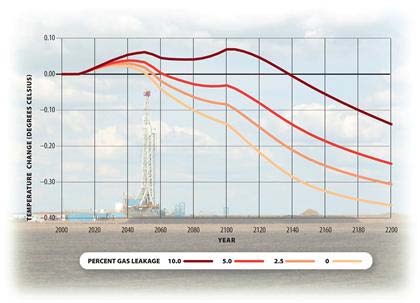 I’ll have more to say about the broader question of gas as a bridge fuel in a later post – I’ll just note for now that my views are becoming much more nuanced as I dig deeper into the matter. In this post, I want to make a simpler point: if you’re focused on limiting climate change to the sorts of targets that are typically discussed (such as two degrees centigrade over preindustrial levels), then worrying about methane from gas production is largely a waste of your time.

Here’s why. Let’s assume, consistent with most policy discussions, that you’re aiming to keep carbon dioxide concentrations below 450 ppm and temperature rises to below two degrees. (Yes, these two have only a loose probabilistic relationship with each other, but they’re what policymakers and analysts generally use to frame their thinking.) You’re pretty much going to have to wipe out the use of coal without CCS by mid-century. Indeed you’ll also have to get rid of (or at least severely slim down on) most traditional natural gas consumption too.

That means that any talk of natural gas as part of a 450 ppm program needs to look at it as a genuine “bridge fuel” – something that ramps up in the near term before giving way to zero-carbon options by around 2050 or so. This article about the MIT Future of Natural Gas study does a nice job of explaining that.

This has big implications. The effects of methane on the climate are relatively short lived. (Methane has an atmospheric lifetime of about a dozen years.) If increased natural gas production leads to substantially larger methane emissions in the next decade or two, but natural gas is then ramped down as part of a “bridge fuel” strategy, the effects won’t linger long. Indeed they should be expected to mostly vanish within a couple decades of the bridge’s end. [UPDATE: For clarity, I should note that methane is ultimately transformed into carbon dioxide in the atmosphere. But the impact is small. For each one percent of produced natural gas that leaks as methane, that will ultimately add only one percent to the CO2 impact of gas use in the atmosphere.]

Many will instinctively dismiss this as irrelevant to the challenge at hand – after all, if we face tipping points in the earth’s climate much sooner than mid-century, it would seem imprudent to push up temperatures during that time. But here’s the thing: if we’re going to cross a tipping point for temperatures in the next few decades, methane emissions from natural gas production won’t be the difference. Temperatures are already heading inexorably up because of built up intertia in the climate system and some unavoidable emissions from existing energy infrastructure. They will continue to rise over the next century even with heroic efforts to rein in emissions. An extra twentieth of a degree of warming from the replacement of gas with coal (that’s the bump in the Wigley et al paper) won’t put us over any thresholds that we weren’t already going to cross a few years later. Moreover, by the time we get to peak global temperatures – in 2100 or so even in a world with massive greenhouse gas reductions and stabilization at two degrees – the lingering effects of methane won’t be around to push temperatures even higher. (The same cannot be said, by the way, for the carbon dioxide emissions from either coal or gas, though an analogue does apply to the case of sulfur dioxide pollution from coal fired plants, which figures prominently in Wigley et al.)

Ultimately, I’m fairly confident in saying that if you’re focused on the sorts of climate objectives that most policymakers talk about, you ought not worry much about the methane emissions from increased use of natural gas. A few caveats, though. First, this is not an argument against worrying about methane in general. (Hence the asterisk on the title of this post.) Persistent emissions of methane lead to persistently elevated methane concentrations and hence to sustained higher temperatures. Reducing those methane emissions matters. But emissions from gas production as part of a bridge fuel strategy don’t fall in that category, since their effects won’t be around when they might really matter. (Emissions from gas production as part of a longer term strategy involving gas with CCS might matter. If we get to a point where CCS use is widespread, though, I’m going to assume that people are also cleaning up their gas production operations.) Second, this does not mean that gas is necessarily a fantastic bridge fuel – it simply does away with one objection to the increased use of gas. (I’ll have more to say about the broader question another time.) Third, I’m not entirely convinced that the argument I’ve just made works if your goal is, say, 550 ppm or higher; I’ll have to spend some more time thinking about that. I suspect, though, that it still holds up.

Andy Revkin and I Talk About Keystone XL