Skip to main content
Why not more articles on China’s reserve growth? And just who are Chinese banks lending to?

Part of the answer is that many -- journalists as well as the public -- still find it a bit difficult to figure out why rapid reserve growth is a problem. Simon Rabinovitch and Eadie Chen of Reuters an exception; their article highlighting the problems associated with the rapid growth in China’s reserves is excellent. Hong Liang and Eva Yi of Goldman now estimate that the monthly losses on China’s reserves are close to $15 billion -- an annualized loss of around 5% of China’s GDP. Part of the answer is that the FT’s Richard McGregor, who covered these issues well, is on book leave. And part of the answer is that the April reserves number hasn’t been formally released, only informally leaked. Building an article around a leaked number that seems too big to be true is a risk.

The vast majority of China’s foreign assets -- $1540 at the end of 2006 and roughly $2170 billion at the end of 2008 continue to take the form of reserves, bank lending and holdings of debt securities. Chinese FDI abroad is still quite small.

The details of the data hint at another interesting story: Chinese investors -- setting SAFE aside -- stopped buying portfolio debt in 2007. Instead Chinese banks starting lending tons of money to the rest of the world. In 2006 China bought over $110 billion of debt -- leading total holdings of debt securities to rise from $117 billion to $229 billion. In 2007, total holdings of foreign securities only rose by $10 billion. Look at the following chart, which shows the annual increase in China’s foreign assets broken down by the main categories in the balance of payments. 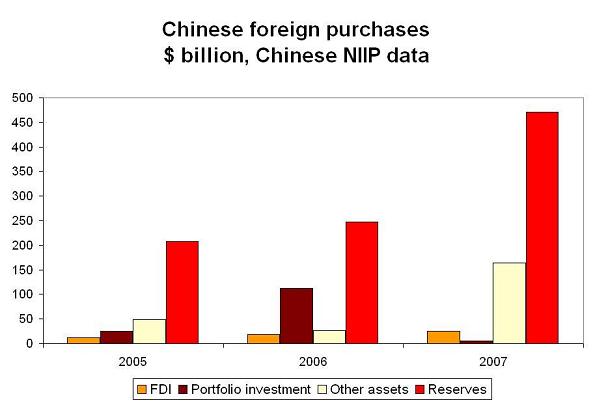 Other data sources -- including the data on banking system’s foreign currency holdings that the PBoC used to release fairly regularly -- tell a similar story. The Chinese were net sellers of portfolio debt in the second half of 2007. Those sales likely followed losses on the debt Chinese banks purchased in 2006 and early 2007.

Scaling back exposure to risky debt may have been wise, but it wasn’t stabilizing. The gaps between the rhetoric about sovereign investors (stabilizing long-term investors) and the available data (which suggests a rush for safety after August) can sometimes be quite significant. Deep pocketed investors that aim to stabilize markets wouldn’t stop buying at a point in time when the market was already under pressure. But sovereign investors sometimes care more about avoiding losses (or avoiding the need to report losses) that stabilizing markets. The banks were playing with money borrowed -- through swaps -- from the central bank. They were effectively managing sovereign money.

What then replaced purchases of debt securities on Chinese bank balance sheets? More bank lending abroad. Bank loans (other investment in the balance of payments data) increased by over $140 billion. I wish I knew who Chinese banks were lending to. Figure that out, and I suspect you can figure out a lot.

Update: Here is the same data as in the previous chart, but presented as a stacked bar to highlight the overall pace of increase. I haven’t adjusted the data for valuation effects, which would tend to increase China’s foreign asset growth in 2005 (there were large speculative inflows in early 2005 in anticipation of the revaluation) and reduce China’s foreign asset growth in both 2006 and 2007. The overall story though doesn’t change much. Net out the roughly $50 billion in the 2007 increase that is explained by the rise in the dollar value of China’s euro holdings and the total increase still tops $600 billion. 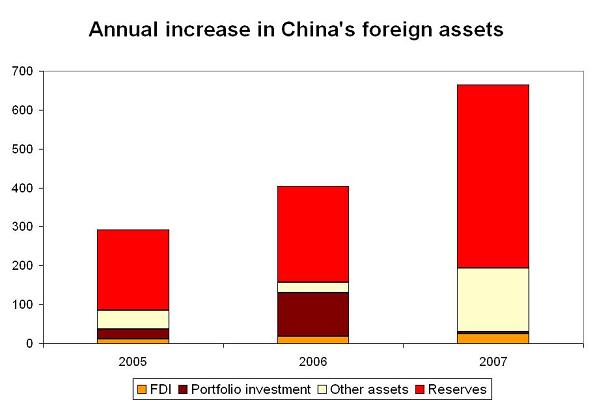 It is 2004 all over again. Central banks haven’t shifted away from safe, liquid assets