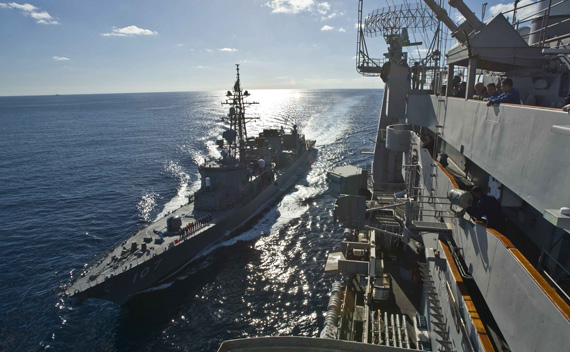 Today, Foreign Minister Seiji Maehara will meet with U.S. Secretary of State Hillary Clinton and South Korean Foreign Minister Kim Sung-Hwan in Washington, DC. Discussions on North Korea’s latest provocation, the shelling of Yeonpyeong island, ought to produce a strong statement of how these three governments will work collectively should the situation in Northeast Asia deteriorate.

Military exercises, first between the U.S. and ROK naval forces in the Yellow Sea and now between the U.S. and Japanese Self Defense Forces (SDF) in the waters east of the Korean peninsula, demonstrate that these alliances are prepared should North Korea continue its belligerence. Yet, no one wants a war in Northeast Asia, and thus the collective diplomatic power of these three countries must be organized in the service of regional stability.

Tokyo has much to gain from this more active role in regional crisis management. First and foremost, Japan has yet to clarify its own expectations of how the U.S.-Japan alliance should operate in the event of a crisis or conflict, much less discuss the possibility with Seoul. Japan’s newly acquired ballistic missile defense systems have only been tested once when North Korea launched an intermediate range missile in the spring of 2009, and while Japanese, U.S. and South Korean ships operated in waters off the Korean peninsula, there was no direct link between Japanese and Korean forces.

Yet it is the political management of the crisis moment that needs most attention. This is a serious gap in Japan-U.S. alliance thinking, and ought to be rectified. A more direct conversation with Seoul can only enhance the effort to ensure smooth crisis management. Again, the spring of 2009 proves illustrative. While both U.S. and Japanese navies were satisfied with their ability to work together to track missiles, the politics of managing the U.S.-Japan alliance proved less easy to navigate. The use of Japan’s new 2005 law on mobilizing against a missile strike to allow the SDF to make decisions was telegraphed to Pyongyang in order to ensure there would be no miscalculation. But Washington and Tokyo could benefit from a much closer examination of the “lessons learned” during that period if they are to avoid nervous public concerns over whether or not the United States is committed to Japan’s defense. This need for a richer alliance conversation on how to deal with North Korean provocations has only increased now that Japan has a new government.

Given the concerns surrounding North Korea’s military strikes against the South of late, Tokyo’s new government must accelerate and expand its security dialogue not only with its ally, the United States, but also with its neighbor, South Korea. While Japan might not be directly involved in a Korean conflict, Japanese citizens will certainly be impacted by events on the Korean peninsula should tensions continue or even become more acute. Seoul’s sensitivities about a Japanese military role on the peninsula will need to be respected, but there is much that can be done to craft a sensible collaboration now that will ease concerns later. The addition of a South Korean observer to the on-going U.S.-Japan military exercises is an important piece of the puzzle. But this opportunity to understand each other’s needs should a crisis emerge ought to open the door to a sustained discussion of how the two neighbors—and their publics—will expect each other to behave.

Finally, Japan must be engaged now in thinking about the possibility of a unified Korean peninsula. As regional tensions have risen, more and more experts wonder aloud as to whether the likelihood of a collapse of the North Korean regime has increased. Should the North Korean regime collapse, the process by which unification takes place will likely determine the future geopolitical landscape of Northeast Asia for some time to come.

For Tokyo, Washington and Seoul, the question is how to get Beijing to work harder to influence Pyongyang. Or, if that influence is indeed limited, then the three allies must work to persuade China that North Korea is a shared problem and thus a common approach to managing Pyongyang’s provocations must be crafted.

Likewise, it is imperative that both Washington and Tokyo help Seoul manage the increasing stresses associated with Pyongyang’s attacks. President Lee Myung-bak has reached out to the international community to forge a response to the sinking of the South Korean naval vessel, the Cheonan, this past spring. He has also worked closely with Washington, and received strong Japanese support in response to the recent North Korean shelling in which not only military personnel but also civilians were killed. Tokyo must help demonstrate to the South Korean people that President Lee’s efforts to work with others who have similar interests in peace on the Korean peninsula can be an effective approach to enhancing South Korea’s security.

Japan cannot afford to ignore the fact that its future security will depend on decisions made now, and the right place to start is in a close and full dialogue with Washington and Seoul that produces a cohesive statement of common strategic intent.

Why We Aren’t China