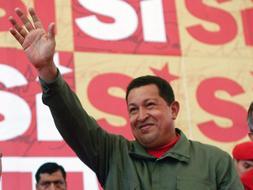 This Sunday Venezuelan voters will go to the polls to decide whether elected officials, including President Hugo Chávez, can run for re-election indefinitely. Chávez has thrown the full force of the government behind the yes vote, while the opposition and student movement have brought hundreds of thousands into the streets for the “no.” Many inside Venezuela and abroad believe this referendum could be the last straw, breaking Venezuela’s fragile and imperfect democracy if passed. Overlooked by optimists and pessimists alike is the real decider of Venezuela’s political future – the economy.

The referendum does matter. Ten years of single strong executive rule have taken a toll on the country’s democratic institutions. The referendum’s passage would open the possibility for Chávez to run again in 2012, and indeed to remain in office for decades to come. But, Chávez would still have to win reelection – and that may now prove to be the most difficult part.

High oil prices granted Chávez an extraordinary political honeymoon. Multi-year double digit economic growth, historically low unemployment, and prolific public spending on social programs fueled the adoration of previously excluded sectors of society. Skyrocketing consumption and the halving of poverty levels won the approval of the middle class.  In fact, according to the pollster Latinobarometer, Venezuelans are among the most satisfied with their democracy in the region.

Yet this situation is about to change. As international oil prices crash, so too will Venezuela’s economy. Predictions for 2009 and 2010 foresee a deep recession in the making. Unemployment will spike into the double digits. Public debt and deficit levels will surge. Inflation is already the highest in Latin America, and forecast to continue its upward climb.

On top of low oil prices, Venezuelan oil production is falling. Outside Energy Information Administration (EIA) and OPEC (of which Venezuela is a member) estimates of 2009 oil production are a third less than Venezuelan government predictions. With oil revenues funding at least half of the $80 billion federal budget, price and output declines mean hard choices. The economic party in the petrostate has come to an end, and Venezuela needs to prepare for the political hangover.

How will Chávez deal with the looming economic crisis? He is unlikely to cut back government outlays to balance his budget, especially since social spending and programs are a key part of his allure. Even the mention of raising domestic gasoline prices– currently essentially free – led to unrest and a quick public backtrack. But continuing lavish spending is also untenable for much longer, even with billions of dollars in reserves. It also fuels the inflation that hits Venezuela’s poor – and Chávez’s base - the hardest.

Venezuela has gone through this economic cycle of oil boom and bust before. In the most recent iteration - in the late 1980s and early 1990s –a popular president faced low oil prices, cut public spending, unrest ensued, deaths occurred, and a group of military officers - including then Lieutenant Colonel  Hugo Chávez – attempted a coup. This economic downturn mortally wounded the political system, opening up the space for Chávez and his “Bolivarian Revolution.”

Will Chávez fare differently? Chávez bases his legitimacy on constant voter affirmation. So far, he has mostly gotten it. He won two presidential elections, two parliamentary elections, and three referendums in the last 10 years. He lost (though closely) a 2007 referendum, and basically tied in the December 2008 regional elections against the opposition.

Pollsters now show a dead heat in the upcoming referendum. A win for the no would bolster Venezuelan democracy. But even if the referendum passes, Chávez has to win again in 2012 to stay in office. With the economy headed south, this is an increasingly doubtful proposition. If the past holds any lessons, he should be more worried about 2010 than beyond. In the Venezuelan petrostate, economics trumps politics.

Lopez Obrador Can Save Mexico by Embracing Globalization

The Future of American Infrastructure