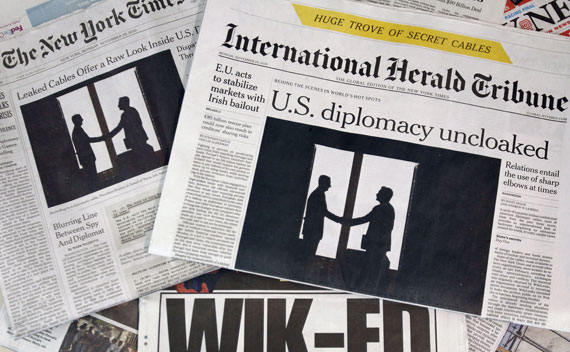 You have to feel a lot of sympathy for senior State Department officials today.  While the rest of us spent the Thanksgiving weekend bingeing on turkey, watching football, or scoring big discounts at the local mall, they spent the holiday on the phone.  I would rather watch my alma mater lose yet again to Ohio State than to have to call one foreign official after another to warn them about unflattering cables about to appear on WikiLeaks.  Even with all the warnings and attendant apologies, State Department officials still ended up experiencing one very, very bad Monday.

The Washington Post allowed me to answer readers’ questions about the WikiLeaks story in an online chat today.  To summarize what I wrote there, the leaked cables don’t tell us much that we didn’t already know.  Arab leaders in the Persian Gulf want Washington to put more pressure on Iran.  We knew that.  U.S. officials have their doubts about Vladimir Putin, Hamid Karzai, and Silvio Berlusconi.  We knew that too.  The Chinese government has ordered cyber-hacking.  Again, we knew that.

But even “old news” can still be a problem.  An obvious one is that foreign officials will be less inclined to be candid when talking to American diplomats.  Another obvious problem is that in the future U.S. officials will be more reluctant to put their ideas on paper and less willing to share them with others.  None of these outcomes is likely to improve the quality of U.S. foreign policy.

The leaked cables could also frustrate efforts to get good policy outcomes.  To take just one case, Washington should be pushing Pakistan to tighten its control of nuclear materials.  But leaked cables outlining U.S.-Pakistani cooperation on that front will make it harder if not impossible for the Zadari government to do the right thing.  More such cases may be lurking in the cable traffic.  We don’t know yet because of the sheer volume of cables.  Which is what makes their release reckless, no matter what grand claims the WikiLeaks manifesto makes about its goal of promoting democratic governance.

The blogosphere abounds with commentary on the WikiLeaks story.  I haven’t had time to plow through much of it.  The pieces by Richard Haass, Dan Drezner, and Peter Beinart are all worth a read. My colleague Max Boot tweaks the New York Times for its attitude toward secrecy.

One final thought.  The WikiLeaks phenomenon will almost certainly be with us for some time.  The challenge for policymakers is to figure out how to adapt.  What advice would you give U.S. officials, or their foreign counterparts for that matter?

The Corrosion of World Order in the Age of Donald Trump