The authors of the IMF’s World Economic Outlook have a difficult job. They have to forecast the trajectory of the global economy -- itself not an easy task. Their forecast will be judged and evaluated in real time. But the work according to a schedule set by the need to consult the IMF board and the demands of physical rather than virtual publication. In practice, that means that the forecast never fully reflects the most recent data. "IMF Board" time, "internet" time and "market" time are all very different things.

Sometimes that doesn’t matter. But right now is one of the times when it does. A lot happened this September. And I suspect that much of what has happened isn’t reflected in the IMF’s forecasts.

In the past I have argued that the IMF has had a tendency to forecast problems like the US current account deficit away, and in effect assume that the US current account deficit would tend to shrink even if neither China nor the US adjusted their policies. The IMF has also tended to downplay the role the official sector has played in financing the US.

Now I suspect that there will be more adjustment than the IMF expects.

That fall seems reasonable. Indeed, the fall in the United States external deficit could be much bigger:

-- the IMF forecast is based on a $100 a barrel average oil price. If oil stays around $90 a barrel, the US deficit would be about $50b smaller (and the surplus of the oil exporters would be reduced by around $150b).

-- The credit crunch could cut into investment, reducing demand for imports

-- Households seem to have, at least temporarily, stopped spending, pushing savings rates up and cutting into imports.

A rise in the fiscal deficit could help offset the slowdown in consumption and fall in investment -- and the pace of US export growth will almost certainly slow as the world slows (the dollar’s recent rebound doesn’t help either).

But all in all, it would seem to me that the US deficit could fall by more than the IMF forecast -- in a rather abrupt adjustment triggered by a sudden fall in US household consumption.

The IMF forecasts that the EU’s 2009 deficit to be about $220 billion, roughly the same as the $230b deficit forecast in 2008. That implies the IMF now expects the combined deficit of the US and Europe would fall, and the combined surplus of the emerging world would shrink.

That is important. The US deficit actually peaked in 2006 at just under $800b. It has been falling since. But the $125b improvement in the US current account deficit has been offset, in a global sense, by a $170b deterioration in the EU’s deficit (it went from $60b in 2006 to a forecast $230b in 2008). Yes, Virginia, exchange rates do matter: this deterioration in the EU’s overall balance followed the appreciation of most European currencies

The combined deficit of the US and EU consequently rose over the past two years even as the US deficit fell, allowing -- in a broad global sense -- Asia’s surplus to rise even as the oil exporters surplus rose. Indeed, in aggregate, Europe (not the US) has been the driver of global demand growth over the last four years. From 2004 to 2008, the US current account deficit rose from $625b to $665b while Europe swung from a $65b surplus to a $230b deficit. That is close to $300b swing in the current account balance of the EU (the swing in the eurozone’s balance is far smaller). From say 2002 to 2005 the US did drive global demand growth, but starting in 2005 the EU picked up and from 2006 through 2008 it carried the baton. 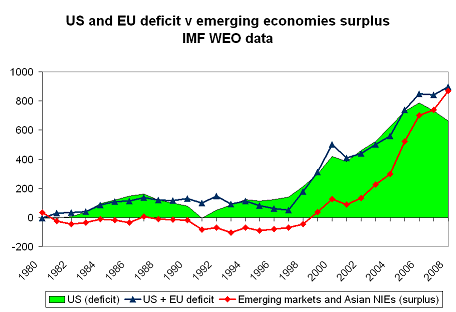 What about the other side of the ledger? 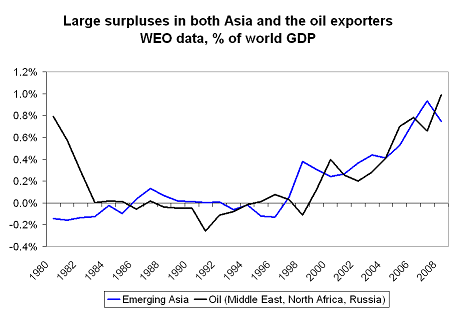 The IMF’s data also leaves no doubt that the surplus in both the Gulf and emerging Asia reflects an savings glut not an investment drought. In both regions investment is well above its levels in the 1990s. Savings just increased more (see Table A16).

Looking forward, the IMF doesn’t expect much adjustment in Asia. Its surplus is expected to remain roughly constant in nominal terms -- in large part because China’s surplus is expected to remain constant. I agree. Export growth will slow, but so will import growth -- and import prices. On balance emerging Asia’s surplus might end up falling by a bit more than the IMF forecasts as the US and Europe slow dramatically.

The Middle East’s surplus is expected to fall from $440b to $365b. That is a meaningful fall -- but it still leaves the Middle East’s surplus well above its 2005 and 2006 level of around $250b. Personally, I would expect a bigger fall -- in part because I do not current expect oil prices to average around $100 and in part because I expect domestic spending and investment and thus imports have increased by more than the IMF assumes. Forecasts for the Middle East are particularly challenging because the region generally doesn’t release timely balance of payments data! 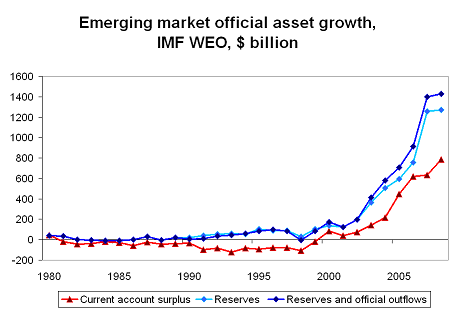 The detailed data tables includes estimate of for the oil money that has been channeled through the Gulf sovereign funds (an estimated $150b in 2008) as Asia’s 2008 reserve growth ($750b). In 2009, the IMF expects the Gulf funds to get another $115b -- and Asia to add about $550b to its reserves. Net official flows from the emerging world to the US and Europe would remain over a trillion dollars -- though they would fall back from the 2007 and 2008 levels.

And I increasingly suspect that one consequence of United States and Europe’s recent financial crisis will be a smaller deficit in both regions, and a smaller surplus in the emerging world.

NOTE: I added the graphs to this post several hours after I initially put up the text; creating the graphs took a bit of time.

It was a wild day in the foreign exchange market