Rumors of the dollar’s demise as a reserve currency have been greatly exaggerated.

The hard data here is pretty clear, at least if you look a bit beyond the (too) easy to calculate data on the dollar’s share of total reserves.  Central bank demand for dollars has NOT waned over the past couple of years. Indeed, 2007 was been marked by a remarkable acceleration in total reserve growth and, I suspect, with a commensurate acceleration in the pace of increase in central banks’ dollar holdings.

The worse the dollar does, the more dollars central banks seem to want. 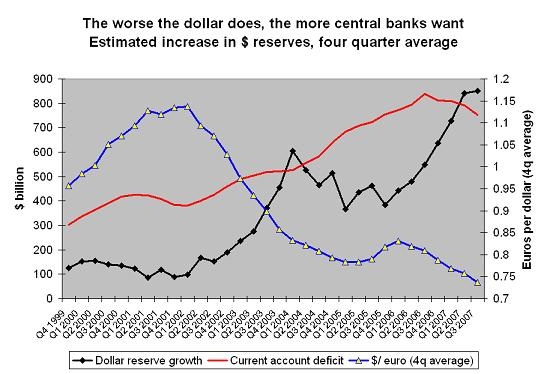 The easiest explanation for the negative correlation between the the dollar’s value (against say the Euro) the global increase in dollar reserves?

My calculations are based on the IMF’s COFER data, augmented by data showing the increase in the Saudi Monetary Agency’s non-reserve foreign assets (from SAMA’s statistical bulletin).

Of course, a lot of countries don’t report detailed data on the currency composition of their reserves to the IMF. My global estimates are based on an estimate the increase in their dollar reserves - as the following chart shows. 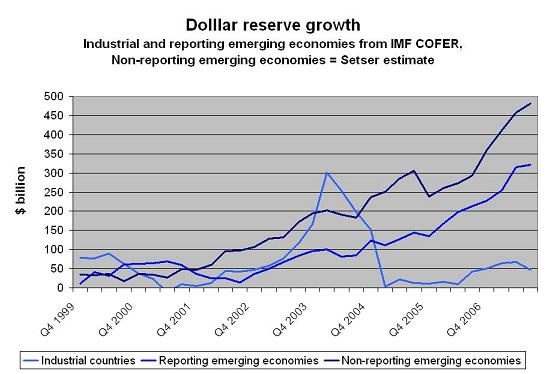 China is clearly the biggest country that doesn’t report, so any estimate of the global total requires making an implicit assumption about its behavior. I effectively assume that it holds a higher share of its reserves in dollars than the countries that do report - and that it has held the dollar share of its reserves constant since mid-2004 (the analysis supporting this assumption can be found in this paper). The Gulf countries are the other large group of countries that almost certainly doesn’t report detailed data to the IMF -- and I suspect they too have a high share of their reserves in dollars. 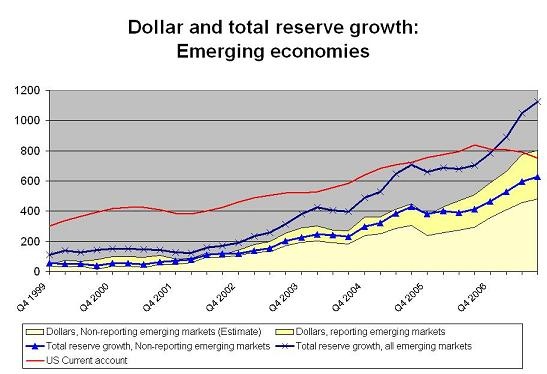 Incidentally, a record increase in central bank holdings of dollars is consistent with a bit of diversification. The overall pace of global reserve growth is so strong that central banks are buying more of everything.

Indeed, the end 2007 data released by the large southeast Asian central banks -- Malaysia, Singapore and Thailand -- contains a hint of diversification. Both Malaysia and Thailand increased the share of their reserves held in currencies that are not part of the SDR basket, i.e. currencies other than the dollar, euro, yen and pound. They collectively increased their holdings of currencies other than the dollar, euro yen and pound by $15.6b in 2007, bringing their total holdings of non-traditional reserve currencies to about $37.1b. But their overall reserve growth was so rapid that they still added $51.1b to their holdings of currencies in the SDR basket. Their dollar holdings still rose substantially.

The IMF COFER data used in this analysis only goes through the end of September.

What of q4? Suffice to say that the data I track with Christian Menegatti of RGE doesn’t suggest any slowdown in global reserve growth in q4. 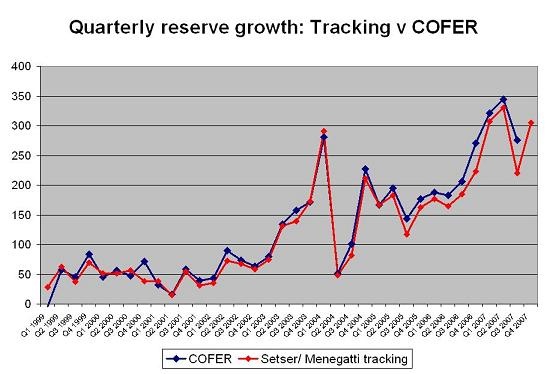 The last chart shows the quarterly data, not a rolling four quarter sum.   But it is pretty clear that adding q4 2007 into any rolling sum won’t lead to any reduction in the pace of reserve growth.  2007 global reserve growth is sure to set a new record.

And 2008?   Well, the early data for January suggests that global reserve growth remains very, very strong.  India, Singapore, Malaysia and Thailand combined to add over $30b to their reserves (counting the increase in Thailand’s forward book). Japan chalked in another $20b, though its total was inflated by the impact of falling long-term rates on its long-term dollar portfolio (Japan marks its bond portfolio to market). Brazil is still intervening as well.

Then throw in China.   Or really through in China’s reserves, the CIC and the state banks, as not all of China’s foreign exchange is now showing up at the central bank.

Then add in the oil exporters ...

There is a reason why the Fed’s custodial holdings rose so strongly in January.

The scale of the increase in emerging market government assets right now is truly mind-blowing.

Good and bad news in the World Bank&#8217;s China Quarterly