Now that the markets have lost a bit of their froth, it seems fitting to note just how sharply trade -- and private financial flows -- have contracted over the past year. The US q1 balance of payments data is rather stunning. 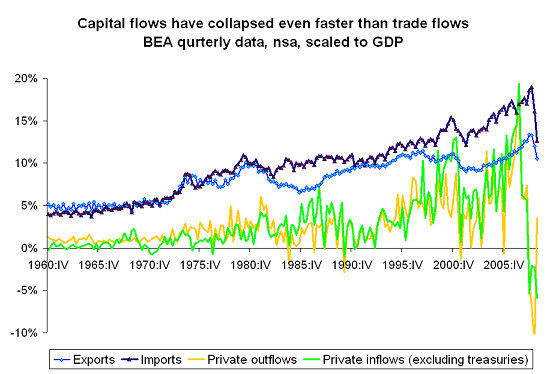 Trade (as we all know) contracted far more rapidly during this cycle than in the past.

I suspect that part of the answer is that a lot of private inflows were linked to private outflows -- as special investment vehicles operating in say the US could only buy long-term US mortgage bonds if someone in the US bought their short-term paper. The fact that private outflows collapsed along with private inflows meant that net private flows didn’t fall at the same rate. Indeed, at times - notably in q4 2008 -- the fact that US investors pulled funds out of the rest of the world faster than foreign investors pulled funds out of the US provided the US with a significant amount of net financing.

And part of the answer is that private investors never were the only source of financing for the US current account deficit. Strong central bank demand -- especially in late 2007 and early 2008 -- offset a fall in private flows.

One thing though is sure: the scale of the collapse in private financial flows during this crisis is entirely unprecedented. There were a few instances in the past when private flows (excluding flows into Treasuries) were slightly negative. But outflows of 5% of GDP in a quarter are entirely unprecedented. And now that the US data has been revised to reflect the survey, adding private purchases of Treasuries back in doesn’t change all that much ... 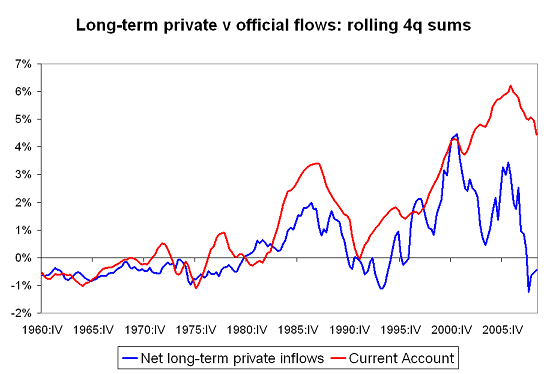 There is more to say on the details of the balance of payments data, but I’ll live it for another post.

What’s the Fallout From the Killing of a Top Iranian Nuclear Scientist?