The conventional wisdom among financial journalists seems to be that exchange rates don’t matter.   At least when it comes to China.     Lex – in an otherwise good column on China’s March trade data – writes:

“To be fair, even if it [The RMB] had moved more [Since July 2005] it would have done little to subdue the trade surplus, given the high level of imported parts in Chinese-made goods and low land and labour costs.

In the short-term Lex is right.  A move in the exchange rate would change prices more than volumes.   But I still don’t quite see how the argument that the RMB/ $ has essentially no impact on trade flows can be asserted with such confidence.

For one, a growing body of evidence indicates that China doesn’t need to import as many components as it once did.   That cheap RMB.  It encouraged parts production – not just final assembly – to shift to China.

For another, a fair amount of evidence suggests that changes in broad trade weighted RMB do have an impact on trade flows (as do most real exchange rate moves).

From 1995 to 2002, the dollar generally appreciated, so the RMB generally appreciated as well. During that period China’s global trade was roughly balanced.   China’s annual export growth was very volatile.  But on average, the pace of growth was good, but not great.  Something like 15% y/y.  I would need to dig a bit to get the precise number.

After the dollar (and the RMB) started to fall, though, Chinese export growth really, really picked up.    It has averaged about 30% y/y from 2003 on.

And guess what, Chinese export growth to Europe really, really picked up after the RMB started to fall v the euro.  China now runs a huge surplus with Europe, not just a large surplus with the US.   Jon Anderson’s China data watch (get on his mailing list) has a nice chart showing this.

Partly as a result, China’s trade has swung into a huge surplus.  The trade surplus didn't emerge immediately after the RMB started to fall.   In 2003, rapid export growth was offset by huge import growth.   China more or less forgot to sterilize an unexpected surge in reserve growth in 2003, and the central bank let the Chinese banks lend out all the funds that were coming in to the banking system.   Once China started both to sterilize and to restrain bank lending, a big surplus quickly developed. (Look at Exhibit 6 in the World Bank report).

If you eyeball the data in the World Bank’s report on East Asia, this comes across pretty clearly.    Or look at this chart, which shows a marked acceleration in the y/y export growth numbers after 2002 - the year when the dollar started to fall. 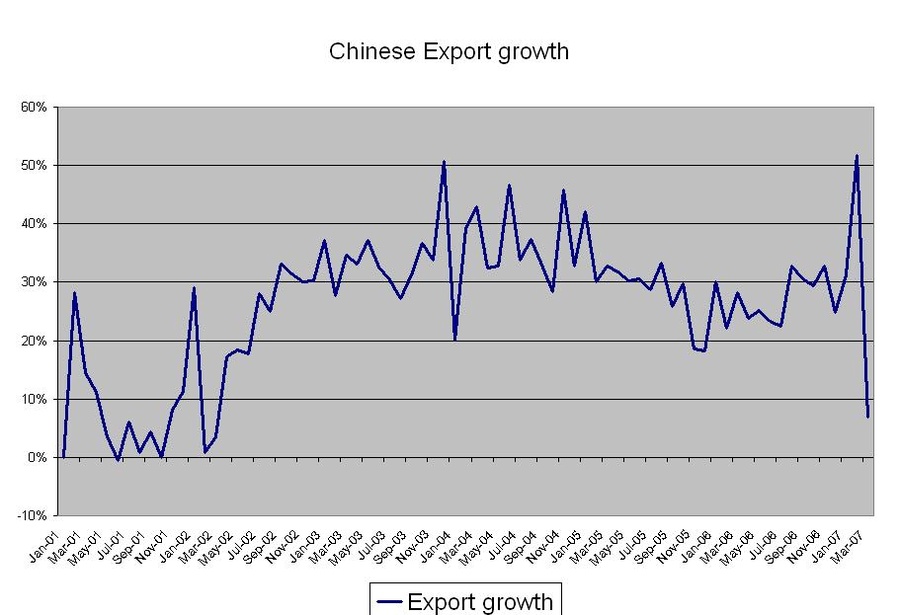 Macroman also has a nice graph that shows a slightly longer time series.  In almost all respects, his graph is actually better than mine -- so do check it out.   His graph shows the y/y change in the the three month moving average of the monthly export and import data -- I am only showing the y/y change in the monthly data.   The y/y growth rate before 2002 was quite volatile, with periods of strong and weak growth (in part because of the Asian crisis), but on average it was much lower.

The conventional wisdom that the RMB has no impact on China’s trade really befuddles me.   After all, the correlation between the fall in the RMB from 2002 on, the pick up in Chinese export growth from 2002 on and the rise in China’s trade surplus from 2004 on is quite clear.   It may be a false correlation, but it sure seems to me that the most parsimonious explanation for the surge in China's trade surplus is the RMB's real depreciation from 2002 on.  One would normally expect strong productivity growth to produce a real appreciation.

I think part of the problem is that there is a tendency (even in Europe, or at least the UK) to equate the value of the RMB with the RMB/ $.   But China now trades as much v. Europe as with the US.    The RMB/ euro and RMB/ pound mater.

Concretely, this means that the RMB’s 7% appreciation v. the $ from mid 2005 on has been offset by the dollar’s even bigger fall v. the euro over the same time period.    The broad trade-weighted RMB hasn’t appreciated.  Look at Exhibit 22 on p. 26 in the World Bank report.  In real terms, the RMB is still below its level in 2002.    As exhibit 21 shows, the RMB has risen by far less in nominal terms against the dollar than other Asian currencies, let alone the euro.

The impact of the RMB/ euro on trade flows isn’t just something the financial press might pay more attention too.    It also is something that Chinese policy makers need to consider.

John Stepek recently suggested that China could punish the US for its more aggressive trade policy by buying fewer US bonds (Mark Gilbert has touched on similar themes).     The US survey shows that China currently is buying about $200b of US long-term debt a year.   That pace has, if anything, probably picked up.   So a fall in Chinese purchases would have an impact.     The PBoC alone finances about a ¼ of the US current account deficit.

China’s response to US protectionism could lead to a surge in European protectionism.  If Europeans became convinced that China was driving the RMB down v. the euro to gain a competitive advantage, my guess is that Europe’s trade policy would start to change.

Even if export growth slows a bit from its current pace, a $300b (goods) trade surplus isn’t out of the question.     The global balance of payments will only work if China finances the US – and continues to finance the US even as the US starts “getting tough” on trade.

What have the world&#8217;s central banks been up to? The latest Treasury survey provides some clues