Richard Eichenberg, “Do Women Dislike Drone Strikes More Than Other Types of Airstrikes? (yes, but only a little),” Ike’s World of Polls from Tufts, February 27, 2015. 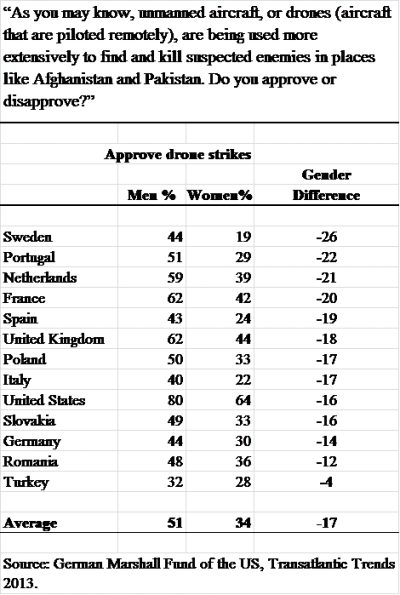 (3PA: This gender gap in support for drone strikes is consistent with all polls of women and men regarding the use of force, as I’ve noted before.)

“The Committee Report on the Mamasapano Incident,” Senate Committee on Public Order, Senate of the Philippines, January 25, 2015, pp. 94-95.

The testimonies of various resource persons, particularly during the executive hearings, appear to contradict the statement of the DFA that Oplan Exodus was 100% purely Filipino planned and implemented. The following facts were attested to:

• One of the Americans ordered Pangilinan to fire the artillery. However, Pangilinan refused and told him “Do not dictate to me what to do. I am the commander here!”

• The Americans provided surveillance in the area through their ISR. TV monitors were brought in by the Americans to the HQ.

Q:  Chairman Dempsey made it clear that he thought that the Syrian rebels need to have some assurances that they will get some type of protection as they go into the fight. I’m wondering, do you agree with that, that there needs to be some sort of assurance given to the rebels? Is it dependent on whether or not they are attacked by ISIL or Assad? And what are the parameters that have to be discussed and that are being debated now, that you think need to be considered as you look at this?

SEC. CARTER: I do agree with General Dempsey. The forces that we train in Syria, we will have some obligation to support them after they’re trained. We all understand that. And we’re working through what kinds of support and under what conditions we would do so, to include the possibility that, even though they’re trained and equipped to combat ISIL, they could come into contact with forces of the Assad regime. So that’s definitely something that we’re aware of and something that we’re discussing, as the chairman said this morning and I completely agree with him.

(3PA: The ad hoc plan to arm Syrian rebels and confused promises made to them by policymakers is similar to the failed Bay of Pigs invasion, as I recently pointed out.)

Beginning with the most general of tests, we find in a sample of militant groups operating in the Middle East and North Africa (MENA) that those lacking centralized leaderships are more than twice as likely to target civilians. MENA groups are also more likely to engage in civilian targeting when the leaders are hindered from communicating tactical instructions to the rank and file. We then examine the impact of the unmanned aerial vehicle (UAV) campaign on the targeting choices of militant groups operating in the Afghanistan-Pakistan region. When their leaderships are degraded through decapitation strikes, militant groups become significantly less discriminate in their targeting choices.

While previous research has established that expansion of the Internet is more likely to be implemented in democracies, this should not lead us to assume that the Internet fosters democratization. Rather, we will have to take a closer look at how non-democratic countries expand Internet coverage, under which conditions this occurs, and what effects it produces…Our first finding is that governments that are more concerned about controlling the domestic information environment have higher Internet expansion rates. The result directly contradicts the ‘liberation technology’ argument, because one would expect that such regimes would be deterred from implementing a technology that enables free information flow. From a ‘repression technology’ perspective, on the other hand, the finding is more intuitive. If the Internet can be used as a tool to solidify autocratic survival by shaping public opinion as well as to identify dissenters, then more repressive regimes should be the most interested in providing online connection. Since the users of ICT are likely to be members of the urbanized, intellectual, and political elite, monitoring has immediate information benefits for autocratic leaders.

Our second test, the impact of Internet penetration on regime change, is less conclusive but clearly does not produce evidence to suggest that democracy advances in autocracies that expand the Internet. If anything, the relationship is the opposite. By looking at episodes of democratic and autocratic changes in low and high penetration countries after the introduction of Web 2.0 (2006–10), we find that the frequency of democratic shifts is higher in the low than in the high penetration group. Conversely, the strengthening of autocratic rule seems to be more frequent in the group of more rapid adopters. Finally, we illustrated how the introduction of the Internet can play into the hands of autocratic governments by looking more closely at the mechanisms of repression associated with the new technology in Saudi Arabia. In sum, the first two decades of humankind’s experience with the Internet lends more support to the notion of ‘repression technology’ than ‘liberation technology’.

Does technology kill distance? Many policymakers and scholars think so. The “globalized” nature of our world is a mantra of the modern corporation, the university, government, and military. Those who embrace it not only call for more open markets, more “international” citizenship, or greater attention to the world beyond. They also assume the passing of an old territorial, state-based order. Fear is never far away from the rhetoric of globalism, about new vulnerabilities and the ease with which aggressors can apply violence over large spaces. Notions of a fragile small world are pervasive in debate about security, from the preservation of biological life to the defense of a way of life.

Globalists claim that a revolution in information, communications, transport, and weapons technology has reduced the transaction costs of interaction over space and linked the world to a point where it has shrunk or even collapsed distance. This creates an unprecedented condition of vulnerability, sensitivities, and connectedness, making the United States and its allies increasingly open to violent threats. Globalists rarely specify exactly the extent to which this has happened. Regardless, they claim that the net effect is to transform international relations and make the world an intrinsically dangerous place.

This book takes aim at globalism, challenging its empirical claims and what it tends toward, the waste of blood and treasure in a utopian impulse to pursue security by remaking the world. My focus is not on geography, or the description of the earth. Instead, the focus is geopolitics, or how people interact with nature in pursuit of security and the relationship between politics, location, and material things. Above all, it is a study of “distance,” or that which separates us, and how it is generated. And it is a caution again liberal wars, or the pursuit of security through the creation of liberal subjects abroad. The cause of armed liberalism, especially of the kind that puts troops on the ground, is now in low water. But the ideas that power it endure. As after Korea and Vietnam, those ideas may make a comeback. (pp. 2-3)

(3PA: This is an important and original look at the world, and worth reading.)

How the U.S. Military Thinks About Complexity

Understanding Gender Equality in Foreign Policy: What the United States Can Do