A senior administration official said that while the new drone-strike policy does rein in executive authority, the NSA and Syria proposals weren’t a reduction of power but an effort to increase transparency and build public confidence.

(3PA: The new drone strike policy doesn’t reign in executive authority, it ensures it in perpetuity, as I have previously wrote.)

(3PA: Three days later and there is no sign of nukes yet, aside from the 5,000 maintained by the U.S. military.)

The Obama administration is considering putting the Pentagon in charge of arming and training moderate rebel forces in Syria, a move that could help expand the effort significantly beyond the limited scope of the current Central Intelligence Agency program, U.S. officials said.

U.S. officials said Tuesday that special-operations forces would be able to train and arm moderate Syrian rebels faster than the CIA and that they have a history of training both commando units and conventional military forces.

Al-Qaeda’s leadership has assigned cells of engineers to find ways to shoot down, jam or remotely hijack U.S. drones, hoping to exploit the technological vulnerabilities of a weapons system that has inflicted huge losses upon the terrorist network, according to top-secret U.S. intelligence documents.

Details of al-Qaeda’s attempts to fight back against the drone campaign are contained in a classified intelligence report provided to The Washington Post by Edward Snowden, the fugitive former National Security Agency contractor. The top-secret report, titled “Threats to Unmanned Aerial Vehicles,” is a summary of dozens of intelligence assessments posted by U.S. spy agencies since 2006.

Men are twice as likely as women to favor U.S. military airstrikes against Syria. Among men, nearly as many favor (39%) as oppose (46%) the proposed military action. Among women, just 19% support airstrikes, while 49% are opposed. Women are more uncertain about what to do at this point – 31% offer no opinion compared with just 15% of men. 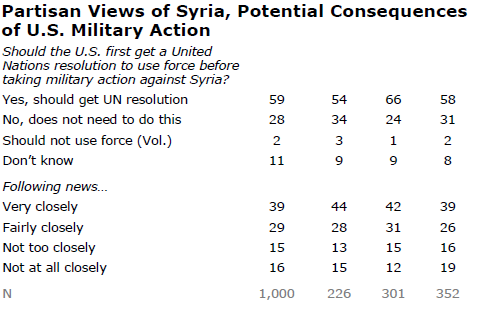 (3PA: As I’ve written before, men are always more likely to support using force then women.)

The United Nations refugee agency says it has received $548 million, or less than half the $1.1 billion it had sought, to pay for relief for Syrian refugees in 2013. Most came from traditional Western donors, led by the United States, which contributed $228 million, or 40 percent of what the agency has received. European countries, Japan, Canada and Australia have together accounted for about 33 percent. Kuwait has contributed $112 million, or about 20 percent.

By contrast, Russia, the Syrian government’s main ally, has given $10 million. China, which has helped Russia block any authorization of military action against Syria in the United Nations Security Council, has given $1 million.

(3PA: The United States has provided forty percent of UNHCR funding for Syria and China has provided less than two percent, which begs the question, who is really “doing nothing”?)

Dan Cerrillo spent more than 13 years as a U.S. Navy SEAL and saw multiple combat assignments in Iraq and Afghanistan before leaving the elite force in 2005. Less than a year later, he was back in Iraq working as State Department private security contractor.

According to the new statistics, which the Syrian Observatory passed to McClatchy by phone, at least 96,431 people have lost their lives in the more than two years of violence that’s wracked Syria.

Of those, Syrian soldiers and members of the government’s security forces account for 24,617, while members of pro-government militias make up 17,031. Taken together, those deaths account for 43.2 percent of the total recorded.

Civilian noncombatants are the next largest group of the dead – 35,479, or 36.8 percent of the total, according to the human rights group.

Deaths among anti-Assad fighters total 16,699, or 17.3 percent, according to the new numbers. Of those, 12,615 were Syrian civilians who’d picked up arms against the regime, 1,965 were rebel fighters who’d defected from the Syrian military and 2,119 were foreigners who were killed fighting on the Syrian rebels’ behalf.

You Might Have Missed: Syria Intervention, WMDs, the "Black Budget”