A controversy exists regarding mobile forager band societies (MFBS)and warfare...We extracted a subsample of purely MFBS (n = 21) from the standard cross-cultural sample (SCCS)…The 21 MFBS produced a total of 148 lethal aggression events. The median number was 4 (mean = 7.05; SD = 14.64), with a range from 0 to 69. One society, the Tiwi of Australia, had an exceptionally large number of lethal events (n = 69). If the Tiwi case is removed, the median number of lethal events for the remaining 20 societies drops to 3.5, the mean is almost cut in half (mean = 3.95; SD = 3.69), and the range is reduced to 0 to 15.

Thirty-six percent of the lethal events took place within the local band; for example, between brothers, fatherand son, mother and child, in-laws, husbands and wives, companions, friends, clan “brothers,” neighbors, andso on (table S2). Six percent of all incidents involved husbands killing wives. In most lethal events (85%), the killers and victims were members of the same society. The remaining lethal aggression events involved persons from outside the society, such as shipwreck victims, colonists, missionaries, or neighboring indigenous cultures. Almost all of the killers were male, whether they acted alone or with others. Females were the killers or co-perpetrators in only 4% of the events…

Taken together, the current findings contradict recent assertions that MFBS regularly engage in coalitionary war against other groups (8), that “chronic raiding and feuding characterize life in a state of nature” [(14), p. xxiv], or that MFBS war deaths are substantial in recent millennia and in the Pleistocene (9)…

In conclusion, when all cases are examined for a systematically drawn sample of MFBS, most incidents of lethal aggression can aptly be called homicides, a few others feud, and only a minority warfare.

Short of ending the drone program altogether, the only way that Pakistan’s leaders can credibly claim to assert their sovereign authority -- and thereby prove their nationalist credentials to political allies and adversaries alike -- is if Washington cedes to Islamabad a greater degree of control over the program, especially when it comes to target selection…

A final option -- and the only realistic compromise at present -- would be for Washington to seek Islamabad’s pre-authorization for specific targets and zones for strikes. ..  A preauthorization regime would also mean foregoing the controversial U.S. practice of signature strikes, in which drones have been used to attack individuals who fit the profile of terrorists -- for example, people who move about in armed convoys or visit known terrorist camps -- but whose identities are not yet known to U.S. officials.

But officials in Washington would be wise not to let relations with Pakistan deteriorate to that point. The United States faces potential challenges in Pakistan that are even more daunting than the war in Afghanistan or the fight against al Qaeda. Nuclear-armed and battling a hardened Islamist insurgency, Pakistan is on track to be the fourth most populous country in the world by midcentury. Pakistan, in short, is here to stay -- as is Nawaz Sharif, at least for the immediate future. Sharif may not be the man that the United States would choose to lead Pakistan, but he is one that Washington would be wise to learn how to bargain with.

In an interview with The Daily Telegraph, General Sir David Richards, Chief of the Defense Staff of the British Army, said that “if you want to have the material impact on the Syrian regime’s calculations that some people seek” then “ground targets” would have to be “hit”…

Sir David, 61, said: “If you wanted to have the material impact on the Syrian regime’s calculations that some people seek, a no fly zone per se is insufficient. You have to be able, as we did successfully in Libya, to hit ground targets. You have to establish a ground control zone. You have to take out their air defences. You also have to make sure they can’t manoeuvre – which means you have to take out their tanks, and their armoured personnel carriers and all the other things that are actually doing the damage. If you want to have the material effect that people seek you have to be able to hit ground targets and so you would be going to war if that is what you want to do.”

(3PA: For my insights into why a no-fly zone in Syria will likely not work, see here.) 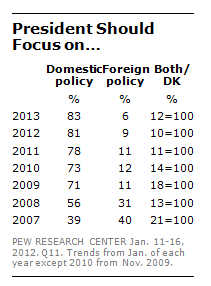 Similarly, when the public was asked in January what President Obama should focus on, 83% said domestic policy and 6% said foreign policy. That was the lowest registration of foreign policy concerns in the 15 years of Pew Research’s January survey on national priorities.

This article evaluates whether the economic benefits of military preeminence and deep engagement are as great as proponents suggest. This evaluation begins by breaking down the arguments that military primacy yields economic returns into the most commonly articulated causal mechanisms. It then assesses what the scholarly literature and evidence can conclude about those causal mechanisms. The three most plausible pathways are the geoeconomic favoritism that foreign capital inflows provide for military super-powers; the geopolitical favoritism gained from an outsized military presence; and the public goods benefits that flow from hegemonic stability…

Each of these arguments is less empirically persuasive than is commonly articulated in policy circles. There is little evidence that military primacy yields appreciable geoeconomic gains. The evidence for geopolitical favoritism is much more robust during periods of bipolarity than it is under unipolarity, which suggests that primacy in and of itself does not yield material transfers. The evidence for public goods benefits is strongest, but military predominance plays a supporting role in that causal logic; it is only full-spectrum unipolarity—a condition in which a single actor is universally acknowledged to be the dominant actor across a variety of power dimensions—that yields appreciable economic gains. The economic benefits from military predominance alone seem, at a minimum, to have been exaggerated in policy and scholarly circles. While there are economic benefits to possessing a great power military, diminishing marginal returns are evident well before achieving military primacy. The principal benefits that come with military primacy appear to flow only when coupled with economic primacy. These findings have significant implications for theoretical debates about the fungibility of military power, and should be considered when assessing U.S. fiscal options and grand strategy for the coming decade. 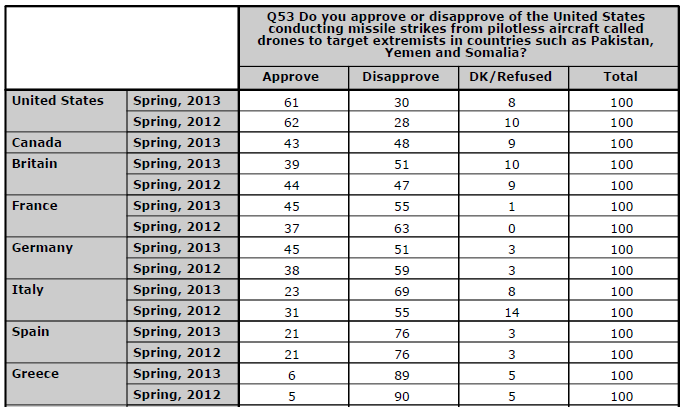 “We are really in a very critical situation, and we don’t understand why our friends delay and delay and delay and hesitate to support us,” Gen. Salim Idriss, the commander of the Western-backed Supreme Military Council, told McClatchy. He said rebel forces were receiving between one-tenth and one-twentieth of the arms and ammunition they needed to take on forces loyal to Assad. “Our friends are not acting, just thinking,” he said.

Guest Post: UNSC Debate on the Protection of Journalists in Armed Conflict