SSBs were defined as any sugar-sweetened sodas, fruit drinks, sports/energy drinks, sweetened iced tea, or homemade SSBs such as frescas, which contained at least 50 kcal per 8oz serving; 100% fruit juice was excluded. (p. 4)

(3PA: Note that "only" 70,000 people worldwide die from all forms of conflict and/or terrorism. More Americans die from diseases related to sugar-sweetened beverage consumption than the average 15,473 Americans killed in violent deaths each year, or the 11,208 killed by firearm homicides.)

Remarks by the President on Progress in the Fight Against ISIL at the Pentagon, White House Office of the Press Secretary, July 7, 2015.

“If we try to do everything ourselves all across the Middle East, all across North Africa, we’ll be playing Whack-a-Mole and there will be a whole lot of unintended consequences that ultimately make us less secure.”

(3PA: Compare this to what Assistant Defense Secretary for Special Operations and Low Intensity Conflict Michael Sheehan proclaimed in June 2013, which directly contradicts Obama: "Whack-a-Mole, in my view, works because terrorists aren’t plastic things that pop up again. When you kill them, they don’t come back. Yes, somebody else may come back, but that guy is probably less effective, less trained, and by the way, knows his buddy before him got...killed.")

Sen. Lindsey Graham (R-SC): General Dempsey, would you agree that there’re more terrorist organizations with more safe havens, with more weapons, with more capability, with more men to strike the homeland than any time since 9/11?

Chairman of the Joint Chiefs of Staff Martin Dempsey: Yes.

Graham: Do you believe that ISIL is expanding in other countries as we speak?

(3PA: Indeed, the number of terrorist attacks, their lethality, as well as the size of terrorist organizations has worsened in past years. Note that Sen. Graham did not follow up to ask why terrorist organizations were larger and more capable. U.S. officials are too vested in the country’s counterterrorism strategy—nearly unchanged over the past thirteen years—to recognize that it is failing. To overcome this, I have suggested that a National Commission on the War on Terrorism be established to evaluate strategic documents and the effectiveness of counterterrorism policies to date, analyze underlying reasons for homegrown terrorism, and provide policy recommendations.)

QUESTION: John, what about Said’s first question, which was: What are you doing to try to – I don’t know – improve the accuracy or somehow dissuade the Saudis from hitting civilian areas? I mean, just today, there was a strike that killed dozens of civilians.

KIRBY: Well, look. We remain in close touch with the Saudi Government regarding a wide range of issues. With respect to Yemen, I’d refer you to them for discussion of their operational details. That’s really for the Saudi Government to speak to. And we take all accounts and reports of civilian casualties seriously, and again, have been very clear about our desire to see a humanitarian pause.

(3PA: The Saudi-led coalition would not be conducting these airstrikes, which are killing civilians, without the enabling capabilities being provided by the United States, primarily targeting intelligence, air refueling, combat search and rescue, and vessel searches.)

(3PA: I highly recommend this report, which is the most well researched and comprehensive study of the 2011 air war in Libya. Unfortunately, it came out shortly after I published a similar chart, listed below, comparing the average strike sorties per day and average bombs dropped per day in various air wars since the 1990s.) 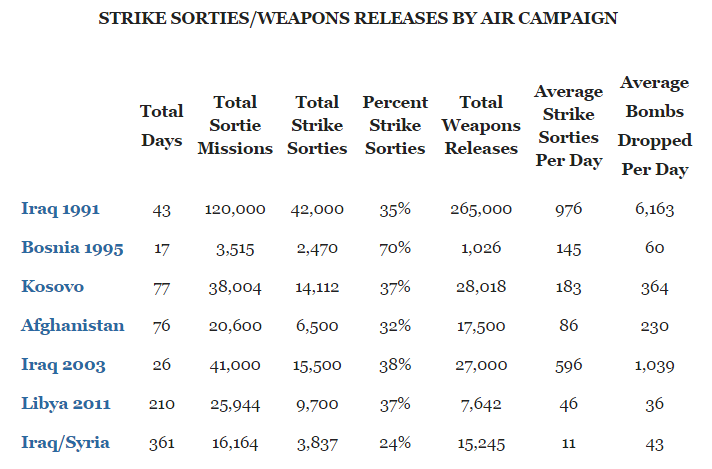 Guest Post: The Rise of the Islamic State in Yemen