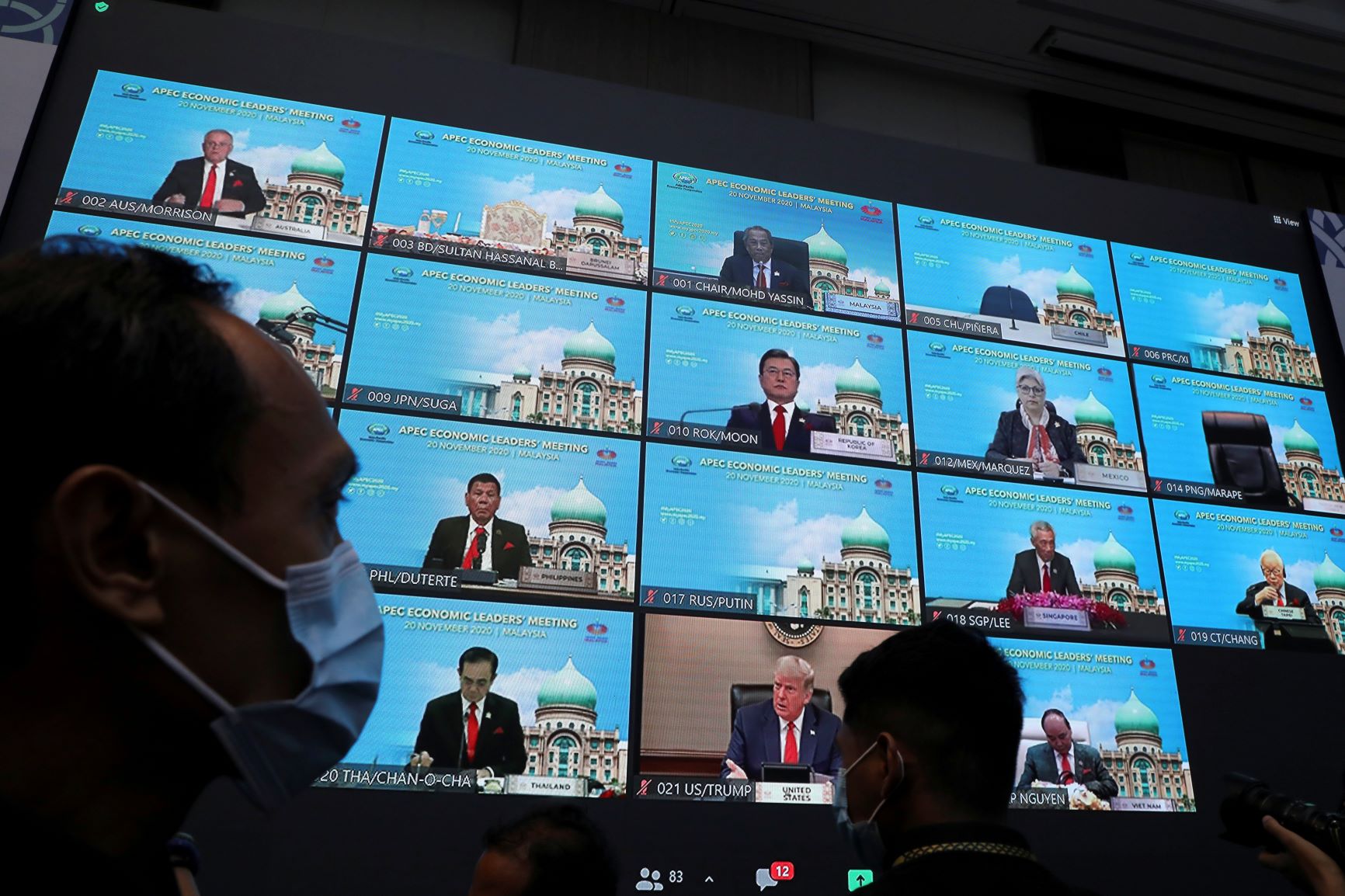 Summit diplomacy was a prominent casualty of COVID-19 during 2020. The pandemic forced the postponement of many high-level gatherings and the shift of others, like the annual opening of the UN General Assembly, to online platforms. Multilateralism-by-Zoom will continue into 2021, as the world rolls out novel coronavirus vaccines. Still, the coming year will be a critical one for international cooperation, even if the calendar remains fluid. Here are ten major summits that will test the mettle of President-Elect Joe Biden, as he executes a 180-degree turn from “America First” and tries to translate his multilateral rhetoric into concrete steps to address real-world problems.

NATO’s Secretary General, Jens Stoltenberg, has invited Biden to a leaders’ summit in early 2021, in the hopes of restoring transatlantic solidarity after the tumultuous Trump years. The meeting will come at a pivotal moment, as the alliance winds down a nearly twenty-year mission in Afghanistan and reconsiders its fundamental rationale in the wake of accusations that it has become “brain dead.” Biden should begin by reaffirming an ironclad U.S. commitment to collective defense under Article 5 of the North Atlantic Treaty. Beyond that, he should embrace NATO’s emerging strategic concept, which envisions an enhanced global political role for the alliance in confronting China’s assertiveness, as well as initiatives to address non-traditional emerging threats, among them challenges posed by disruptive technologies, outer space competition, and climate change.

According to the Financial Times, European Union (EU) leaders view Biden’s election as a “once-in-a-generation” opportunity to revitalize the transatlantic partnership, and they plan to host him in early 2021. Earlier this month the European Commission unveiled a remarkable document, titled “A New EU-US Agenda for Global Change,” that frames the U.S-EU relationship as “the linchpin of a new global alliance of likeminded partners.” Beyond closer coordination on the “strategic challenge” of China, it calls for enhanced bilateral cooperation in defending democracy, developing vaccines, combating climate change, regulating digital commerce and AI, and much more. If the EU responded to Trump by seeking “strategic autonomy,” the Biden years portend an era of strategic realignment.

The president-elect has pledged during his first year to “bring together the world’s democracies to strengthen our democratic institutions, honestly confront the challenge of nations that are backsliding, and forge a common agenda to address threats to our common values.” Biden’s aspirations are laudable, but his planned event is fraught with peril. The trickiest question is determining the guest list. The world is full of quasi-democracies like Brazil, Hungary, the Philippines, and Turkey that are U.S. partners or allies. Should they be invited? What about the world’s largest democracy, India, whose government is pursuing chauvinist policies of Hindu nationalism? The risk of creating new fault lines is enormous. There is also the question of America’s credibility to lead on this agenda. After Trump, does the United States deserve to be at the head of this table? If Biden proceeds with his plans, he must adopt a posture of humility and beware setting expectations too high.

This spring, the Chinese government will host the fifteenth Conference of the Parties (COP15) to the UN Convention on Biological Diversity, originally scheduled for last October. The assembled countries will adopt a strategic plan—billed as a New Deal for Nature and People—to guide their individual and collective efforts to protect biodiversity through 2030. The need is urgent. A slew of alarming reports has documented a dramatic decline in species and ecosystems, thanks not only to climate change but also to the degradation of land- and seascapes, unsustainable exploitation, invasive species, and pollution. These assaults on nature undermine the planetary foundations of sustainable development and, indeed, of global capitalism itself. Biden can help bend the curve of biodiversity loss by endorsing the “30 by 30” campaign to protect 30 percent of Earth’s land and sea from human exploitation.

Prime Minister Boris Johnson will host next year’s summit of the Group of Seven (G7) advanced market democracies, as the group considers expanding its membership. With Trump gone, there will be no misguided suggestions of bringing Russia back into the fold. Instead, Johnson has invited Australia, India, and South Korea to attend alongside current members Britain, Canada, France, Germany, Italy, Japan, the United States, and the EU. Were it to become permanent, such a “democratic ten” (or D10) could provide a Western counterweight to China’s growing influence. Beyond advancing these geopolitical ambitions, the UK will likely use its G7 presidency to strengthen global preparedness for future pandemics, to promote free trade in the wake of Brexit, and to encourage ambitious greenhouse gas reduction pledges in advance of the November climate summit in Glasgow (discussed below).

The Kazakh government still hopes to host the twelfth ministerial conference of the World Trade Organization (WTO), postponed from 2020, but it has been awaiting confirmation for months. The WTO’s inability to confirm its next summit is the least of that body’s problems, however. Over the past four years, the Trump administration has sought to marginalize the multilateral organization, including by launching a bilateral trade war against China (as well as the EU), crippling the WTO’s dispute resolution mechanism, and vetoing the selection of the consensus candidate to be its next Director-General. Things should be looking up for the WTO in 2021. Biden and his trade representative Katherine Tai will surely maintain a hard U.S. line on China, but unlike Trump they understand that a strong WTO—and support from other major trading partners—is critical to getting Beijing to play by the rules.

The parties to the Treaty on the Non-Proliferation of Nuclear Weapons (NPT) were supposed to meet for their periodic review conference last April, on the fiftieth anniversary of the NPT. Rescheduled twice, that meeting will now occur in August 2021, and not a moment too soon. The global arms control regime is under extraordinary stress. The New Strategic Arms Reduction Treaty (START) is set to expire in February. North Korea may well test the new administration with provocations, and Iran could do likewise if Biden falters in his plans to rejoin the Joint Comprehensive Plan of Action. Meanwhile, fissures between nuclear and non-nuclear weapons states are widening, with the UN Treaty on the Prohibition of Nuclear Weapons set to enter into force in January. One of Biden’s steps should be to overhaul Trump’s Nuclear Posture Review, which imprudently raised the salience of nuclear weapons in U.S. defense policy.

Biden’s first high-profile opportunity to speak to the United Nations comes in September, when he takes the podium for the annual opening of the General Assembly. As always, the President of the United States will be speaking to two audiences, one foreign and the other domestic, a delicate balancing act. Look for Biden to curry international favor by abandoning Trump’s nationalist tone, unilateral instincts, and sovereign defensiveness, while rededicating the United States to the UN’s founding purposes and to the hard work of multilateral diplomacy. On the domestic front, Biden would be wise to stress just how much the UN does to advance the concrete interests and values of U.S. citizens, while tempering expectations of what it can deliver at a time of intense geopolitical rivalry. Public opinion polling suggests that Americans will be receptive to such a message.

Italy assumed the presidency of the Group of Twenty (G20) on December 1 from Saudi Arabia, whose lackluster year as chair was upended by the pandemic and marred by political controversy over the Kingdom’s dire human rights record. The Italians have chosen “People, Prosperity, and the Planet” as three interconnected themes. The hosts hope to reinvigorate multilateral cooperation in the face of concurrent global health, economic, and ecological crises, so that the world can “build back better” from the pandemic, adopting a new growth model that meets basic human needs, reduces extreme inequality, and preserves the global environment. In addition to the main October summit itself, Italy hopes that leaders will also attend an in-person G20 Global Health Summit on May 21.

The twenty-sixth Conference of the Parties (COP26) to the UN Framework Convention on Climate Change (UNFCCC) will be the most important summit of 2021. Leaders will meet in Scotland to review progress in implementing the 2015 Paris Agreement, which commits parties to holding the rise in average global temperatures to 1.5 degrees Celsius, including by “ratcheting up” their initial, nationally determined contributions toward this goal. Unfortunately, reaching the Paris target will require reducing greenhouse gas emissions 7.2 percent per year through 2030, and the world—despite the pandemic-induced recession—is nowhere close to this trajectory. Joe Biden has pledged to rejoin Paris immediately upon inauguration, to make the battle against climate change the centerpiece of his presidency, and to seek greater global ambition in Glasgow. The credibility of U.S. leadership, however, will depend on whether he can persuade Congress to fund deep decarbonization at home.

As these ten summits suggest, the global agenda facing Joe Biden is the most daunting any U.S. president has confronted in decades. The future of international security, freedom, prosperity, development, health, and indeed of the planet itself are all up for grabs. The president-elect has already declared that “America is back,” and pledged to adopt a multilateral course. Returning to the arena is only the beginning, but it is an essential first step in tackling the world’s most intractable challenges.

More from the Council of Councils
The Future of Nuclear Nonproliferation and Disarmament Is in Danger
The World Can Prevent Future Pandemics. Here's How to Fund It
A Region Divided: What Did the Summit of the Americas Accomplish?
Drag