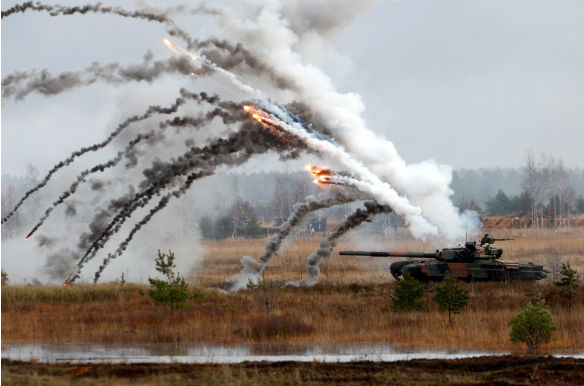 The demise of the Intermediate-Range Nuclear Forces (INF) Treaty poses a substantial challenge to the security and cohesion of the North Atlantic Treaty Organization (NATO). The defense alliance once again faces the difficult task of balancing deterrence and arms control. The INF Treaty—a pillar of the post–Cold War European security architecture—was signed by the United States and the Soviet Union in 1987 to prohibit possessing, flight-testing, and producing ground-launched cruise (GLCM) and ballistic missiles (GLBM) with ranges of 500–5,500 kilometers (311–3,420 miles).

On February 2, citing Russian material breach of the accord, the United States suspended its obligations under the INF Treaty and initiated a six-month-long withdrawal process. As far back as 2014, the administration of U.S. President Barack Obama had publicly accused Russia of violating the INF Treaty by testing GLCMs, later identified as 9M729 (NATO designates it as SSC-8), which are now deployed. The United States asserts that it will stop its withdrawal if Russia returns to INF compliance before August, but such a scenario is unrealistic. Russia denies that the 9M729 has a range greater than five hundred kilometers and quickly responded to the U.S. suspension and withdrawal with its own suspension of its INF Treaty obligations. NATO backs the U.S. decision but has yet to agree on a broader response to the collapse of the treaty.

NATO is reviewing the security implications of Russian violation of the INF Treaty and has pledged to both ensure the credibility of the alliance’s deterrence and defense and to strengthen arms control measures. The violation, which according to the United States started in the mid-2000s, falls into a broader pattern of hostile Russian behavior toward its neighbors and NATO.

Since Russia’s 2014 aggression against Ukraine and annexation of Crimea, NATO has responded with an enhanced deterrence and defense posture, as well as by holding talks with Russia to try to reduce tensions. But NATO allies see the proper balance between those elements in different ways. Reacting to the demise of the INF Treaty, many Western European governments will likely call for increased dialogue on arms control with Russia and oppose any far-reaching military response, as German Foreign Minister Heiko Maas has already done. While countries from the alliance’s eastern flank, such as Poland, also see a need for dialogue on arms control, they will focus on enhancing NATO’s deterrence.

Many allies fear not just further escalation of tensions with Russia but also public backlash against a possible arms race, bearing in mind massive protests in Western Europe in the 1980s against deployments of U.S. nuclear-armed Pershing II GLBMs and Gryphon GLCMs. Under NATO’s 1979 dual-track decision, the missiles, capable of striking the western Soviet Union, countered the nuclear threat posed to European allies by Soviet SS-20 GLBMs and also served as bargaining chips in U.S. negotiations with the Soviet Union to reduce and eventually eliminate such arms.

These concerns seemingly contributed to the years-long reluctance of many allies to address INF Treaty violation, resulting in NATO’s tepid support for U.S. efforts to bring Russia back into compliance. NATO sharpened its joint statements on the issue in 2017 and 2018 but never developed a comprehensive policy or authorized joint military pressure. Only on December 4, 2018, did all NATO members clearly agree publicly for the first time that Russia had breached the INF Treaty. This followed U.S. President Donald J. Trump’s announcement in October 2018 that the United States would leave the treaty, a move criticized by several allies, including Germany and France, but supported by a few others, including Poland and the United Kingdom. As Europeans sought more time for diplomacy with Russia, the United States delayed its withdrawal and called for the destruction of all Russian 9M729 missiles (Russia is reported to have nearly one hundred of them) and their launchers by February 2, without success.

The 9M729 missiles are capable of carrying either nuclear or conventional warheads but seem to primarily enhance Russia’s abilities to launch conventional strikes, which rely on the massive use of precision-guided munitions. The 9M729’s range (reported to be 2,000–2,350 kilometers, or 1,240–1,460 miles) indicates that most of its NATO targets would be in Western Europe. In the last decade Russia has expanded its arsenal of other medium-range missiles carried by ships, submarines, and airplanes. However, such missiles can be deployed in greater numbers on much cheaper land-based mobile launchers. The latter are difficult to find, and they can be deployed continuously within range of their targets and used quickly, which is often not the case with ships and airplanes. In effect, the 9M729 would help Russia constrain NATO’s freedom of maneuver in a conflict. For example, missile attacks on ports and airfields would impede the deployment of reinforcements to NATO’s eastern flank.

While Russia can already strike all of Europe with its various nuclear forces, the 9M729 also serves Russia’s apparent interest of having nuclear options tailored to specific levels of escalation. INF weapons can serve as tools of nuclear blackmail aimed particularly at Western Europe, especially as Russia is openly developing them since suspending the INF Treaty. Such intimidation might already take place in peacetime to discourage policy choices unfavorable to Russia, as well as in a crisis to prevent a unified NATO response. Russia is now developing a land-based version of the sea-launched Kalibr cruise missile, but in practice this could just be a rebranding of already existing 9M729 missiles (9M729 has been widely suspected to be precisely an INF Treaty-violating variant of the Kalibr missile). Russia is also working on a hypersonic missile much faster than the 9M729, thus shortening reaction time and possibly creating greater psychological pressure on NATO allies.

Options for a NATO Military Response

NATO could also enhance its ability to hold Russian targets at risk. The United States does not currently seek land-based, INF-range nuclear missiles, and their deployment would be deeply divisive in Europe. Moreover, while NATO needs to keep its nuclear policy and capabilities credible, it does not have to symmetrically match every Russian system. The United States is, however, now developing conventional land-based, INF-range missiles. Their primary purpose is by all indications to better counter China in the Asia-Pacific, but the United States could become interested in deploying such missiles to Europe as well, especially as the U.S. Army stresses the role that survivable and prompt ground-based missiles can play in degrading and penetrating Russian anti-access/area-denial systems. While not as controversial as nuclear missiles, conventional INF systems would still be seen as destabilizing by a number of European countries, although their views could ultimately depend on the specifics of particular weapons, such as their speed or range. But it is also noteworthy that the Soviet Union became interested in limiting INF systems precisely because it perceived U.S. missiles, particularly fast-flying Pershing IIs, as destabilizing.

NATO could use air- and sea-based missile platforms, which lack some of the characteristics of land-based systems and also perform other tasks, but are less controversial, more flexible, and largely already available. For example, this could involve continuously rotating U.S. non-nuclear bombers to Europe and exercising cruise missile launches with allies. In part to counter Russian INF Treaty violation, the Trump administration already plans to reintroduce sea-launched nuclear cruise missiles. However, they will not be ready until around 2030 and are opposed by some members of Congress.

Returning to the original INF Treaty will be increasingly unlikely as both Russia and now the United States see a growing role for INF weapons. The most discussed alternative, as suggested by Trump, is to involve China in a new trilateral agreement to ban or limit INF systems. Unconstrained development of such Chinese missiles substantially influenced the United States to withdraw from the treaty and Russia to violate it in the first place. However, China has rejected German calls for such talks.

Russia, aware of European sensitivities regarding the INF Treaty, has made its own proposal. When suspending the treaty, Russian President Vladimir Putin declared that Russia will not deploy INF systems in Europe or other regions unless the United States does so first. In reality this would prevent U.S. deployments but allow Russia to continue to field the 9M729, which it depicts as compliant with the INF Treaty. Moreover, Russia could abandon this pledge anytime by claiming that United States deployed sea-launched medium-range Tomahawk cruise missiles in ballistic missile defense sites in Romania and Poland. In response to U.S. accusations from 2014, Russia has alleged that these launchers have the ability to fire such offensive missiles and thus violate the INF Treaty

NATO could present its own proposals to ban or limit INF systems in Europe, but such arrangements would require Russia to at least tacitly recognize the 9M729 as an INF system. A stringent verification regime would be crucial, especially given the likelihood that the 9M729 can also be deployed on launchers carrying INF Treaty–compliant Iskander missiles. But even if the above conditions are met, Eurocentric agreements would be challenged if Russia developed longer-range INF weapons capable of striking Europe from Asia.

In a post–INF Treaty world, NATO can combine deterrence and arms control in different ways, but the trade-offs will not be easy. Many military countermeasures, especially those involving defensive assets, would fit into broader adaptation to conventional and nuclear threats posed by Russia, which are exacerbated by the 9M729. NATO could simultaneously declare its readiness for arms control talks with Russia, but in order to have realistic chances for reaching that goal it would need to also adopt a military response strictly related to the INF Treaty violation. This would require deployments or readiness to deploy strike systems to increase pressure on Russia and to reverse or constrain these measures, if a new accord was reached. Before that could happen, NATO would likely need to withstand a period of increased instability in its relations with Russia, which would surely try to undermine such countermeasures. At the same time, NATO’s situation could also deteriorate if it does too little and fails to punish INF Treaty violation and dissuade Russia from pursuing further destabilizing expansion of its INF forces.

Although controversial, the potential deployments of U.S. conventional INF missiles to Europe deserve thorough consideration by NATO. It should assess their military but also political utility, as they would be the most straightforward way to signal to Russia that at least limiting INF systems is in its interest. Without a doubt, Russia would step up its efforts to exploit tensions on that issue and divide NATO. But it may have no lesser opportunities to do so, if NATO’s joint position on post-INF policy is too general. This would risk some allies acting beyond NATO consensus and either seeking stronger military countermeasures with the United States or conducting uncoordinated arms control talks with Russia. Avoiding such outcomes requires close NATO consultations and U.S. involvement in bridging the differences among allies. Whether these conditions can be met, however, is not certain, especially given current transatlantic tensions.

More from the Council of Councils
U.S. Capitol Breach Was a Shot Heard Round the World
Up in the Air: Ten Global Summits That Will Test Joe Biden in 2021
Blueprint for 2021: Six Paths to a More Resilient World
Drag