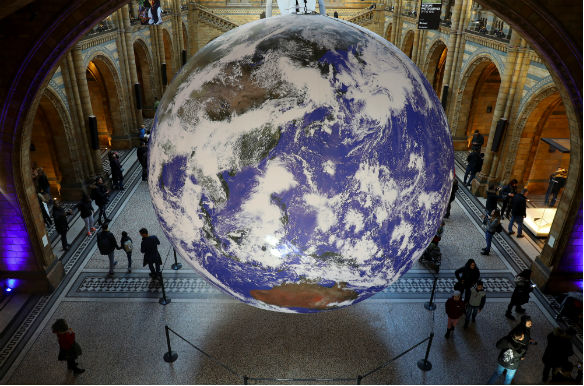 With each passing year, the number of international summits seems to expand. During 2019, globetrotting leaders will need to choose among a daunting array of meetings vying for their attention. Some of the most important will deal not with traditional security challenges or macroeconomic coordination, but with what is arguably the greatest dilemma facing humanity in the twenty-first century—namely, how to advance economic prosperity and social welfare without destroying the planet and prospects of future generations in the process.

The calendar for the coming year is heavily back-loaded, with most significant multilateral events occurring in the second half of 2019.

AI for Good Global Summit (Geneva, May 28–31): Although billed as a “summit,” this annual gathering is actually a multistakeholder forum organized by the International Telecommunication Union and its partners. The meeting, which first took place in 2017 and includes leaders from the worlds of politics, science, industry, and civil society, is the premier UN platform for exploring the latest breakthroughs in artificial intelligence and their potential for improving human lives. Although the gathering is unlikely to attract heads of state or government, it merits inclusion in our summit list because it becomes clearer every day that AI will revolutionize, for better or worse, all categories of human interaction—whether social, cultural, economic, or geopolitical. It also underscores how technological innovation, driven largely by the private sector, is outpacing standard-setting and regulatory efforts at both the national and global levels.

G20 Summit (Osaka, June 28–29): In early summer, Japan will host the Group of Twenty (G20) for the first time. The meeting occurs only seven months after the most recent G20 confab in Buenos Aires, Argentina, giving the organizers little time to prepare. Japanese Prime Minister Shinzo Abe wants the gathering to focus on climate change and broader environmental challenges to sustainable development. His priorities include slowing biodiversity loss, stemming marine pollution, reducing risks of natural disasters, and creating a “circular economy.” Abe will also press his foreign partners to make progress on universal health coverage, which will be the topic of the G20 Health Ministerial that Japan plans to host in October.

High-Level Political Forum on Sustainable Development (New York, July 9–18): In July, governments will convene at UN headquarters for a status update on the Sustainable Development Goals (SDGs). Approved by consensus in 2015, the SDGs provide a global blueprint for alleviating poverty, advancing social welfare, and conserving the environment through 2030. The 2019 forum will provide an opportunity to assess the world’s progress in advancing these seventeen goals (which include a whopping 169 targets). The results will likely be discouraging, as few nations are on track to fulfill the majority of these objectives.

NATO Summit (Brussels, July 22): The coming year marks the seventieth anniversary of the North Atlantic Treaty, signed in Washington in April 1949. The allies are unlikely to be in a celebratory mood when they convene in July. The past two years have been tempestuous. Like past American presidents, Donald J. Trump has accused allies of freeloading on U.S. largesse. Unlike past presidents, he has seriously undermined the credibility of U.S. security guarantees on several occasions. Still, the alliance persists, thanks in part to continued Kremlin provocations, including Russia’s proxy intervention in Ukraine, its use of chemical weapons on British soil, and its efforts to undermine and manipulate Western democracies through sophisticated information operations. Sympathetic observers hope for a smoother experience than that of the 2018 summit, which dissolved into acrimony and a blunt Trumpian threat to go it alone if European nations refused to increase their defense budgets.

G7 Summit (Biarritz, August 24–26): Observers will get a second chance to gauge the state of Western solidarity in late August, when the world’s most important market democracies meet by the Bay of Biscay for the annual Group of Seven (G7) summit. French President Emmanuel Macron, this year’s host, will try to persuade his G7 partners to redouble their efforts to ratchet up their Paris Climate Agreement commitments, to promote gender equality, and to devote greater resources to global health (including for the Global Fund for AIDS, Tuberculosis, and Malaria, for which France will host a replenishment conference in October). While insisting that the G7 must retain its “coherence,” Macron wants to work with other countries and regions, including “with China on climate and trade, with India on digital affairs, with Africa on youth affairs.” More provocatively, he aspires to depart from lowest common denominator communiques by allowing “vanguard countries” within the G7 to make more ambitious commitments. Whether this will fly with U.S. President Donald J. Trump—who infamously rejected the G7 communique in 2018 amid a spat with Canadian Prime Minister Justin Trudeau—is anybody’s guess.

Opening of the UN General Assembly (New York, September 17–30): The annual September gathering of world leaders is always a high-profile event, and the 74th opening of UNGA will be no exception. Beyond kicking off the parade of speeches from the podium, UN Secretary-General António Guterres will preside over other high-level events. One is a climate summit, where Guterres will press assembled statesmen and women on the urgency of saving the planet from gaseous peril. Another is a high-level dialogue on financing for development, intended to mobilize public and private resources to meet the seventeen SDGs.

ASEAN and East Asia Summits (Early November, Bangkok): A hallmark of the twenty-first century is the growing economic clout of Asia relative to the rest of the world. Two events in early November will underscore that surging importance. The first is the 35th summit of the ten-member Association of Southeast Asian Nations, which convenes in 2019 under a Thai presidency. By custom, that meeting will be immediately followed by the more encompassing East Asia Summit, which also includes China, the United States, Japan, South Korea, Australia, Russia, India, and New Zealand. All eyes will be on the United States and China amid their rising tensions in the Asia-Pacific. If the U.S.-China trade war continues to deepen, the summit could be volatile, especially if President Trump attends.

Paris Peace Forum (November 11–13): Armistice Day will feature the second edition of this new gathering, which seeks to promote new ideas and showcase innovative projects for more effective multilateral cooperation. The forum started with a bang in 2018, thanks to the high-level sponsorship by French President Macron and the presence of dozens of world leaders in Paris to commemorate the centenary of the 1918 armistice, which ended the bloodshed of World War I. The challenge for the organizers is to maintain the forum’s momentum, as well as the integrity of its hybrid form, which combines top-level buy-in with bottom-up activism. (Full disclosure: I sit on the forum’s international steering committee.)

UNFCCC COP 25 (Mid-November, Chile): Perhaps the last major summit of 2019 will occur in mid-November, when parties to the UN Framework Convention on Climate Change (UNFCCC) meet for the twenty-fifth Conference of the Parties (COP). The gathering had been slated to take place in Brazil, but the country’s nationalist president-elect (and Trump simpatico)—Jair Bolsonaro—pushed his government to renege on hosting the conference, a move in keeping with his promises to exploit the Amazon rainforest and rollback protections for an area that serves as the planet’s lungs. As the conference takes place in its new venue in Chile, with Costa Rica assisting in its organization, two questions will be at the forefront. First, can the parties build on the eleventh-hour breakthrough at COP24 in Katowice, Poland, where negotiators agreed to a new regime for monitoring and reporting emissions and their reductions? Second, will the Trump administration continue to don the mantle of spoiler, as it did in Poland, or play a more constructive role, in encouraging the transition to a post-carbon economy?

The hectic 2019 summit calendar offers little rest for world leaders, wicked and virtuous alike. It also affirms that ecological matters—that is, humanity’s relationship with the biosphere—are now front and center in world politics.

More from the Council of Councils
How U.S. Civil Protests Resonate With Publics Worldwide
Coronavirus: The View From Italy, China, Singapore, India, and the UK
Brexit Is Here: The EU and UK Must Brace for the Consequences
Drag