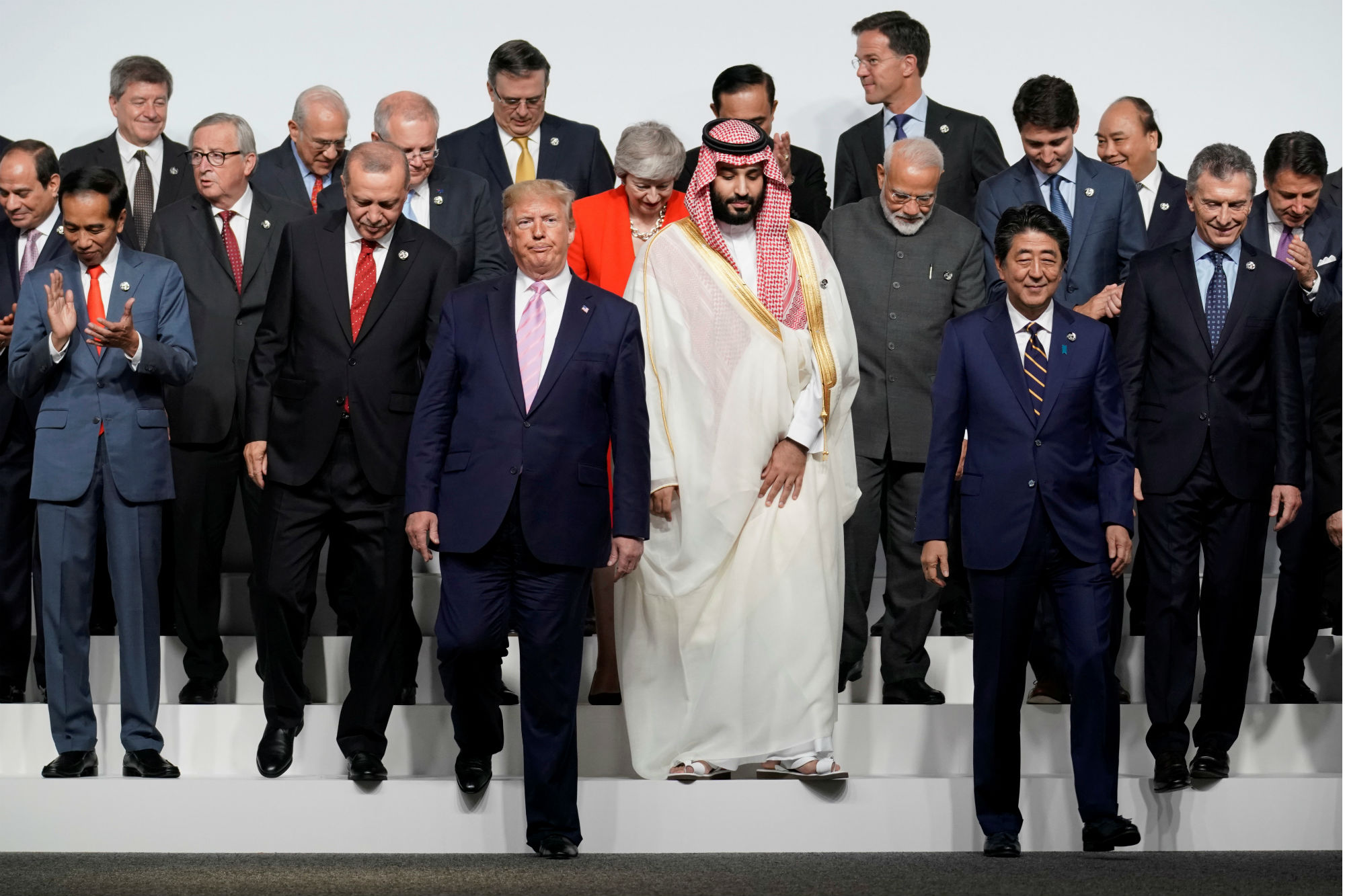 As the second decade of this century comes to a close, effective multilateral cooperation seems to be on the ropes. The Donald J. Trump administration has abandoned U.S. global leadership, brazen geopolitics have returned with a vengeance, and populist leaders have exploited public dissatisfaction with globalization to chip away at European and broader global integration. Existing international organizations, meanwhile, have failed to respond adequately to the aspirations of rising nations and the challenges posed by climate change, protectionism, and cyber threats, among myriad other issues. Six summits in 2020 will help determine whether a multilateral renaissance is possible.

In late April, the parties to the Nuclear Nonproliferation Treaty (NPT) will meet on the fiftieth anniversary of the treaty’s entry into force to assess its implementation and compliance. The mood at the review conference (RevCon), which occurs every five years, will be anything but celebratory. The NPT is founded on a precarious balance between three objectives: countering nuclear proliferation, disarming existing nuclear powers, and promoting cooperation on and access to peaceful nuclear energy. All three of these pillars are weakening as nuclear weapons states modernize their arsenals and develop destabilizing weapons, such as hypersonic missiles; new dual-use technologies increase escalation risks; arms control agreements including the Intermediate-Range Nuclear Forces (INF) Treaty and the Iran nuclear deal fall by the wayside; North Korea continues to defy international nonproliferation efforts; and the regional arms race between India and Pakistan heats up. Given deepening divisions between nuclear and non–nuclear weapons states, including over the Treaty on the Prohibition of Nuclear Weapons, the odds are good that the 2020 RevCon, like many of its previous editions, will adjourn without a final consensus document.

In late spring, President Trump hosts leaders from other advanced market democracies at Camp David in Maryland’s Catoctin Mountains. The rustic venue was a fallback choice after Republicans and Democrats alike pilloried Trump’s self-serving proposal to hold the gathering at the Trump National Doral in Miami. Unlike President Barack Obama, who welcomed Group of Eight leaders to the presidential retreat in 2012, Trump disdains the forum and the Western liberal order it represents. Talk of a “G6 plus 1” may be outdated, however, given Trump’s close rapport with Boris Johnson, the newly empowered British prime minister, and with his Japanese and Italian counterparts, Shinzo Abe and Giuseppe Conte. The three will provide a counterweight to Trump’s fraught relations with France’s Emmanuel Macron, Germany’s Angela Merkel, and Canada’s Justin Trudeau. The White House has already announced that climate change will not be on the agenda, which is not surprising since the president skipped the climate session at this year’s summit in Biarritz, France. Trump, building on the recent U.S.-Mexico-Canada trade agreement, could press for similar managed bilateral trade deals with the European Union, the United Kingdom, and Japan. Finally, Trump could once again propose that the G7 readmit Russia, which was suspended from the club after its 2014 seizure of Crimea.

World leaders will celebrate the seventy-fifth anniversary of the United Nations when they gather for the annual opening of the UN General Assembly (UNGA). To commemorate the occasion, Secretary-General Antonio Guterres has launched what the body is calling a global conversation, titled UN75, and will organize all 2020 UNGA events around the theme “The Future We Want, The UN We Need: Reaffirming our Collective Commitment to Multilateralism.” These will include a high-level meeting of world leaders on September 21 intended to culminate with a concluding document that is “concise, substantive, forward-looking, and ‘unifying.’” The secretary-general has his work cut out for him, as many of the United Nations’ traditional supporters, including the United States and Brazil, have turned inward. Guterres can at least count on France and Germany, which recently launched the “Alliance for Multilateralism,” a flexible network open to all nations committed to collective action to solve global problems. Given the political forces arrayed against such an initiative, though, whether the alliance will be able to hold the line, much less rally adherents to its vision, remains unclear. The most important factor determining the future of the United Nations could well be the outcome of the U.S. presidential election in November 2020.

For the past decade, Brazil, Russia, India, China, and South Africa have sought to transform the BRICS from a catchy label bestowed by investment banker Jim O’Neill into a geopolitical and economic counterweight to Western market democracies. The Achilles’ heel of this effort remains the heterogeneity of a bloc that comprises two wary authoritarian powers—one declining and another rising—and three boisterous democracies of varying economic weight. These differences were on display in 2019, when right-wing populist Brazilian President Jair Bolsonaro, a vocal critic of China, welcomed the group to his nation’s capital. In 2020, Russian President Vladimir Putin will host the bloc’s twelfth summit under the banal slogan “BRICS Strategic Partnership for Global Stability, Shared Security and Innovative Growth.” Russia’s priorities include bolstering joint efforts to counter terrorism, combat transnational crime, increase energy security, and expand scientific collaboration. It also looks to strengthen BRICS financial arrangements, such as the New Development Bank. More generally, Putin seeks a bloc capable of coordinating its positions at the United Nations. That strategic goal is likely to prove elusive. The BRICS may provide a useful platform to tweak—or at least challenge—the prerogatives of established powers, but fundamental divergences in the interests and values of its members will continue to limit its consolidation.

Perhaps the most important summit of the year will unfold in Scotland, where nations will gather for the twenty-sixth Conference of the Parties to the UN Framework Convention on Climate Change. Five years after the historic Paris Agreement on climate, states parties are slated to unveil their plans to ratchet up the commitments they made at COP21 in Paris, which includes pledges to hold average global temperature increases to 1.5°C above preindustrial levels, with a fallback of 2°C. Unfortunately, few countries are on track to meet even their Paris commitments, and emissions continue to rise. According to the recent Emissions Gap Report by the UN Environment Program, the world will need to reduce emissions 7.6 percent per year through 2030 to meet the 1.5°C target. The European Union may have embraced the goal of achieving net-zero emissions by 2050, but others are moving in the opposite direction. The United States has started the clock for pulling out of the Paris accord, China is building new coal-fired power plants, and Brazil under Bolsonaro has rolled back protections of the Amazon Rainforest. Given the disappointing outcome of the recent COP25 summit in Madrid, where parties failed to establish more ambitious emissions-reduction targets, create a global carbon trading system, or expand assistance to developing countries to help mitigate the effects of climate change, Glasgow is looking more and more like a planetary Hail Mary.

The G20’s fifteenth summit will be its first in the Middle East, with Saudi Arabia slated to host the world’s premier forum for global economic coordination next year. The gathering is likely to attract controversy, given the kingdom’s dire human rights record and Crown Prince Mohammed bin Salman’s alleged complicity in the murder of Washington Post columnist Jamal Khashoggi. The hosts would clearly like to shift the focus onto progress Saudi Arabia is making under its ambitious modernization plan, Vision 2030. The government has chosen as its summit theme “Realizing Opportunities of the 21st Century for All,” and has identified three priorities: “empowering people,” particularly by expanding opportunities for women and youth; “safeguarding the planet,” by fostering water and food security, environmental stewardship, and a clean energy transition; and “shaping new frontiers,” by harnessing technological innovation for sustained and shared growth. Like previous hosts, Saudi Arabia has invited a handful of nonmember states—Jordan, Singapore, Spain, and Switzerland—as well as a slew of international and regional organizations to attend.

The year ahead is shaping up to be a busy one for international summitry. Whether that augurs a decade of fruitful global discussions, however, is a question that perhaps cynics and pessimists are best positioned to answer. The beginning of the 2020s is already likely to be fraught with geopolitical competition, and there is little sign of it abating. More than a dash each of luck, goodwill, and diplomatic skill will be necessary to shift the balance of world politics from relative enmity toward comity among nations.

More from the Council of Councils
The World Can Prevent Future Pandemics. Here's How to Fund It
A Region Divided: What Did the Summit of the Americas Accomplish?
Russia’s Invasion of Ukraine Will Have Lasting Implications
Drag