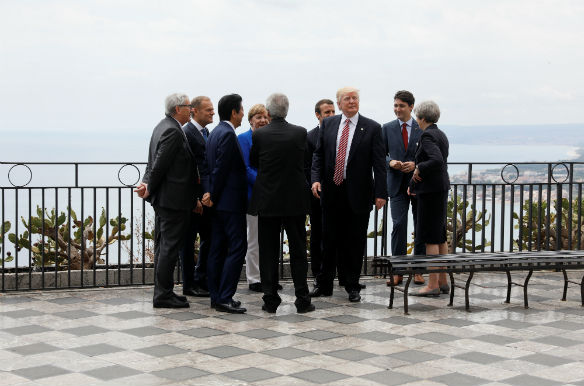 Is “America First” compatible with international cooperation? That question will get even louder in 2018, as world leaders gather for ten pivotal meetings. Collectively, they will reveal whether President Donald J. Trump’s first year was an aberration—or the start of the post-American world.

Summit of the Americas, April 13–14 (Lima, Peru). President Pedro Pablo Kuczynski will welcome thirty-four other heads of state and government at this eighth triennial conclave of hemispheric nations. The host nation is on a roll, having enjoyed domestic stability and 5.9 percent annual economic growth over the past decade. But the picture is less rosy in neighboring countries mired in economic stagnation, authoritarian populism, and violent crime. Kuczynski, moreover, has been dogged by charges of self-dealing and just narrowly escaped impeachment. The Peruvian government has thus chosen an apt summit theme—“Democratic Governance against Corruption”—and has enlisted civil society actors across the hemisphere to advance regional dialogue on potential cures for this pervasive cancer. Lima will be Trump’s first Summit of the Americas, and his administration’s hard line on immigration, counternarcotics, and Cuba may become flashpoints after the relatively placid Obama years.

G7 Summit, June 8–9 (Charlevoix region, Canada). Last year in Sicily President Trump had a dismal first meeting with America’s most important Western partners, behaving boorishly and finding himself isolated on climate and trade policy. He gets a chance for a do-over in June when the G7 meets in the picturesque Quebec town of La Malbaie, on the north shore of the St. Lawrence River. Under Prime Minister Justin Trudeau, Canada has outlined a progressive vision for its G7 presidency, focused on four themes: investing in inclusive growth, addressing climate change, strengthening peace and security, and advancing gender equality (including sexual and reproductive health). But many officials in Canada (as well as in Germany, France, Italy, Japan, and the United Kingdom) wonder what prospects such a globalist agenda can have when an “America First” president actively opposes so much of it. The Charlevoix summit will show whether the G7 has indeed become the “G6+1.”

Euro Summit, June 28–29 (Brussels)  Seeking to turn the corner after a spate of bad news (culminating in the Brexit calamity), the remaining twenty-seven European Union (EU) member states will seek to relaunch the European project. The European Commission’s goal is to secure agreement in June 2018 on concrete steps to deepen the Economic and Monetary Union, consistent with the roadmap set out on December 6 by Commission President Jean-Claude Juncker. “After years of crises, it’s now time to take Europe’s future into our own hands,” he declares. The centerpiece is establishment of a European Monetary Fund that could act as a lender of last resort for distressed banks. The roadmap also envisions a new European Minister for Economy and Finance, as well as new EU budget instruments to ensure stability of the euro area within the broader EU framework.

NATO Summit, July 11–12 (Brussels). Donald Trump’s ill-mannered behavior dominated last year’s NATO meeting, where the president memorably berated allies for freeloading on U.S. largesse, shoved aside the leader of tiny Montenegro, and prevaricated on whether the United States recognized its collective defense obligations under Article 5 of the North Atlantic Treaty. With luck the 2018 edition will focus on more substantive—and pressing—matters. These include reconfirming the value of the recently deployed multinational battle groups as a “tripwire” on the alliance’s eastern flank, bolstering NATO’s presence in the Black Sea, enhancing NATO’s capabilities for both cyber-defense and hybrid warfare in the face of Russian aggression, and redoubling the allied commitment to destroy the Islamic State. Additional burden-sharing commitments from European allies could help mollify the Trump administration, permitting the president to declare “victory.”

BRICS Summit, Date TBD (Johannesburg). South Africa will convene the tenth summit of the BRICS, joined by fellow members Brazil, Russia, India, and China, at a date to be determined. The event comes at a critical time both for the host nation and the coalition of emerging economies. A quarter century after the end of apartheid, the government of Jacob Zuma and the ruling African National Congress confront a public disillusioned by rampant corruption and the persistence of a vast underclass in the continent’s wealthiest nation. The once high-flying BRICS, meanwhile, face renewed questions about their relevance as a coherent bloc, given their diverse political systems, economic trajectories, and strategic interests. The BRICS—with forty percent of the world’s population and a quarter of its wealth—clearly have clout. Less clear is whether they have a common program of action, beyond a general critique of the existing Western liberal order.

Opening of United Nations General Assembly, September 18–25 (New York). A year after threatening to “wipe North Korea off the map,” President Trump returns to New York for more diplomatic speed-dating with world leaders. Presuming war has not yet broken out, the administration will seek to tighten UN sanctions on Kim Jung-un’s regime even further, as well as argue that Iran is violating the terms of the Joint Comprehensive Plan of Action. At the same time, the United States will likely decline to participate in the focus of the 2018 opening session: namely, endorsement of two new UN compacts on the humane treatment of migrants and refugees. Such a pick-and-choose attitude toward multilateralism will risk isolating the United States at the precise moment it seeks solidarity. Complicating matters, the Trump administration will likely find itself isolated on Israeli-Palestinian issues, which the General Assembly may take up in the wake of the U.S. recognition of Jerusalem as Israel’s capital.

Our Ocean Summit, Date TBD (Bali). In autumn 2018 the government of Indonesia will host the fifth edition of the Our Ocean conference. Established in 2014 under the leadership of then-Secretary of State John Kerry, the annual gathering convenes UN member states, as well as international organizations, corporations, foundations, NGOs, and research institutes to make commitments and share best practices to improve the dire state of the oceans. This massive agenda includes expanding marine protected areas, combating and adapting to climate change, promoting sustainable fisheries, reducing marine pollution, improving maritime security, and promoting the “blue economy.” Indonesia, an archipelago of more than 17,000 islands and the world’s second largest contributor to oceans plastic pollution (after China), is an ideal location to hold this gathering. To date, the Trump administration has maintained a low profile on global ocean conservation issues, and there is little expectation this will change.

G20 Summit, November 30–December 1 (Buenos Aires). Long treated as an afterthought within the Group of 20, Argentina gets to strut its stuff and prove its bona fides at the group’s first summit in South America. Domestically, the timing could not be better. Under the leadership of its still-popular president, Mauricio Macri, the country is finally shrugging off the populist politics and protectionist policies of Peronism, emerging as a leading champion of both democratic governance and globalization. Like previous hosts, the Argentines have expanded the G20 agenda beyond purely macroeconomic and financial issues to address a broader gamut of global challenges. As priorities for leaders’ discussions, the summit has chosen three topics: the future of work, including the implications of innovation and automation for education, employment, and equality; meeting global infrastructure needs, both physical and digital; and the expansion of food security, including though sustainable agricultural development.

UNFCCC COP 24, December 3–14 (Katowice, Poland). Of the many U.S. foreign policy shifts under President Trump, none has been as dramatic and damaging as his June 1 decision to withdraw the United States from the 2015 Paris Climate Agreement. The rest of the world has shown a dogged determination to proceed, with China, Germany, France, and Canada in the vanguard, joined by a heterogeneous global alliance of cities, provinces, U.S. states, and corporations who have all announced, “We Are Still In.” The United States was a no-show at last month’s Bonn Conference of Parties (COP) to the UN Framework Convention on Climate Chance (UNFCCC), leaving former New York mayor Michael Bloomberg to raise private money for the U.S. pavilion. Without a White House change of heart, look for the same thing next year at COP 24, where conferees are slated to focus on finalizing guidelines to implement the Paris accord. All is not lost in the United States, however: On September 12–14, California Governor Jerry Brown will convene a Global Climate Action Summit in San Francisco—a symbol of how U.S. climate policy has shifted to states, cities, civil society, and the private sector.

More from the Council of Councils
A Region Divided: What Did the Summit of the Americas Accomplish?
Russia’s Invasion of Ukraine Will Have Lasting Implications
COVID-19 After Two Years: The Failure of Pandemic Governance
Drag