Last year was good for China. The country managed to maintain relatively fast economic growth, became the leading exporting nation, and at the end of the year stood on the brink of becoming the second largest economy in the world. China’s status in key world economic forums rose substantially, to the point that commentaries frequently talked of a new G2--China and the United States--playing the dominant role in international economic policymaking in the years to come.

Developments thus far in 2010, however, suggest that China will continue to face significant challenges in trying to sustain relatively rapid growth. Domestic demand will have to be restrained to avoid excesses developing, while the strength of external demand will remain highly uncertain, reflecting the strength of economic recovery and policies in China’s major trading partners. The severity of these challenges will, in many ways, depend on whether China insists on maintaining its policy of keeping a stable exchange rate between the yuan and the U.S. dollar.

The robust health of China’s economy stands in sharp contrast with the weak and uncertain recoveries in the economies of other major countries. While China is concerned about reining in economic activity to ensure that it does not get out of hand, the developed countries struggle to keep their economies growing. In these diverse circumstances, the authorities in these countries are coming to see China’s exchange rate policy as an important distortion in the world economy that will hold back adjustment of global imbalances and slow the recovery of other economies worldwide. Quietly, many developing countries, particularly those in East Asia, are coming to a similar view, as they face strong competitive pressures from China.

Flawed Arguments for a Stable Yuan

With pressure growing on China to allow the yuan to appreciate, some familiar old arguments are being trotted out to fend off pressure and delay currency appreciation by Chinese officials and some analysts working on China. These faulty arguments should be ignored, and the heat should remain on China for a needed change in exchange rate policy.

The first old argument making a comeback is that a stable yuan is not only good for China, but is good for the rest of the world. The roots of this argument go back to the Asian financial crisis of 1997-98. At that time, China was persuaded to keep its exchange rate fixed against the U.S. dollar when its currency was facing downward pressure to prevent setting off a round of competitive devaluations among the crisis-stricken countries in the region. While at the time this was a very important policy decision by the Chinese authorities, any competitive disadvantage that China may have suffered was quickly more than offset in the period after the crisis by the rapid growth in productivity in China relative to its competitors. Nevertheless, despite a burgeoning trade surplus, China continued to defend a pegged exchange rate until July 2005 (when the rate was revalued slightly and allowed to appreciate gradually until August 2008, at which time the rate was effectively repegged to the U.S. dollar) as being in the best interest of China and the rest of the world, just as it had been in 1997-98.

China’s actions in 1997-98 are being invoked by officials in Beijing as justification for China’s decision during the current economic and financial crisis to maintain a stable exchange rate against the U.S. dollar. It is argued that this policy helped to support China’s growth during the recession and that it is good for the rest of the world because strong growth in China’s economy makes a major contribution to recovery in the world economy.

The authorities in [developed] countries are coming to see China’s exchange rate policy as an important distortion in the world economy that will hold back adjustment of global imbalances and slow the recovery of other economies worldwide.

There is truth to this claim from a narrow statistical point of view. As the second or third largest economy in the world, if China grows faster, then that would, of course, raise the average rate of growth for the world economy. But that does not mean China’s growth is adding measurably to the growth of other countries. That impact depends on how much growth in China’s demand is contributing to stimulating growth in other countries. The reality is that China with a large trade surplus sells substantially more to the rest of the world than it purchases, and therefore, it continues to subtract significantly from net world demand. Thus, the rest of the world as a whole is not benefitting much from China’s strong growth.

Some countries (particularly those in Asia and commodity producers) may be benefitting, and the decline in China’s trade surplus in 2009 means it took less away from net world demand than in previous years. Nevertheless, China’s contribution to the rest of the world’s growth has not been much, and it will diminish in 2010 and the years beyond as China’s trade surplus is expected to start rising again.

Another old argument still making the rounds is that even if the yuan were allowed to appreciate significantly, it would not materially change the pattern of imbalances among the world’s major economies because it is not the root of the problem. Even with a higher value for the yuan, China would continue to be the world’s leading exporter because it has a major competitive advantage in manufacturing. Manufacturing in the developed countries would not recover. Therefore, the argument concludes, changing China’s exchange rate cannot be expected to make a major contribution to boosting the net exports of developed countries. 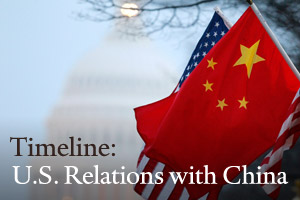 For instance, some analysts argue that even if China’s currency were allowed to appreciate such that China’s current account surplus would decline by 4 percent of its GDP annually and return to a level more in line with the country’s long-term fundamental saving and investment balance, this would directly contribute only about a half percentage point to annual growth in the developed countries. Such a boost to these countries’ economies is characterized as being small and not critical to addressing global imbalances.

China’s contribution to rest of the world’s growth has not been much, and it will diminish in 2010 and the years beyond as China’s trade surplus is expected to start rising again.

In a world economy looking for new sources of stimulus to spur demand growth (and developed countries as a rule having little scope to make further use of fiscal policy), the old argument is clearly wrong. A change in China’s exchange rate policy is a critical element in the world economy’s recovery.

The Need to Press Beijing

Finally, there is the grand old argument that the Chinese authorities do not respond well to external pressure for policy change. Changing exchange rate policy in China is a political decision made at the highest level of government. Accordingly, China’s leaders do not want to be seen as bowing in the face of foreign pressure. This is said to be particularly true at the moment because relations between China and some of the developed countries, especially the United States, have become increasingly tense. In these circumstances, the Chinese authorities could choose to cling to the current fixed exchange rate policy to project strength. The suggestion from this argument is that the rest of the world should ease pressure on China, and a change in China’s exchange rate will come at a more appropriate time.

The reality is, however, that without pressure being exerted to encourage a change  in its exchange rate policy, China will have no reason to move. And when patience grows thin and pressure rises again, this same argument will be trucked out once more to try to further postpone policy adjustment.

There are no good reasons for other countries to diminish their pressure on China to change its exchange rate policy. The heat is on, as indicated by President Barack Obama’s concerns about the value of the yuan expressed in recent remarks. And the heat needs to stay on.

Chinese authorities recognize that China needs to change its growth model and rebalance its economy away from heavy reliance on investment and exports to generate growth toward greater reliance on consumption. That will not be accomplished unless greater flexibility and an appreciation of the exchange rate are permitted. It is understandable that a country might resist being called on to make a policy change that would entail a sacrifice to benefit of the rest of the world. But that is not the case in this instance. Increasingly, other countries will feel justified in strongly pressing China to change its exchange rate policy.

If China continues to resist, other countries will ramp up pressure and are likely to choose to retaliate against China’s exports to try to force a change. China has to act soon and in a decisive manner to avoid doing itself great harm.