The Ebola outbreak in West Africa, the largest of its kind in history, has been responsible for more than 15,000 cases, including more than 5,400 reported deaths as of late November. Unlike the responses to previous Ebola outbreaks, political and public health leaders have upped the ante by explicitly framing the disease in national and international security terms. Margaret Chan, the director general of the World Health Organization (WHO), spoke of “a threat to national security well beyond the outbreak zones,” and U.S. President Barack Obama described the outbreak as “a growing threat to regional and global security.”

Although public health experts dismiss the prospect of a worldwide pandemic or even a sustained outbreak in the United States, Americans were told that the United States’ national security would be threatened by both an Ebola-triggered state collapse in Africa and a large number of panicked people (some of whom also carry the virus) flooding into the United States from Central and South America. 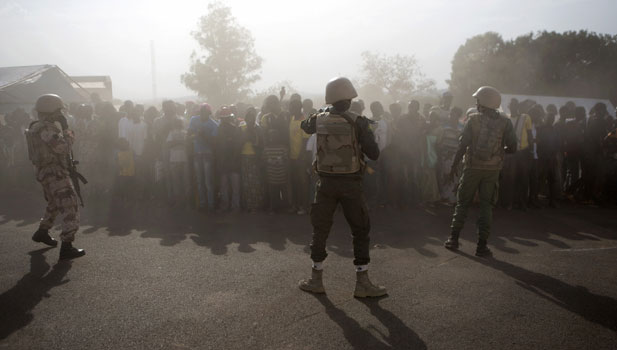 "Politicians and military officials placed the virus on par with hard security threats such as ISIS terrorists."

By calling for tighter border security in combating Ebola, politicians and military officials placed the virus on par with hard security threats such as ISIS terrorists. In a move not seen in the 2009 H1N1 pandemic, which killed an estimated 284,000 people, Obama announced the establishment of a new military command in Liberia and committed nearly 4,000 troops to the afflicted region.

The United States is not the only country that has “securitized” the Ebola outbreak, a political process that has presented the virus as an existential threat requiring actions outside the normal bounds of political procedure. In Sierra Leone, the defense minister, not the health minister, was put in charge of the “fight” against Ebola. In Liberia, President Ellen Johnson Sirleaf imposed a state of emergency that closed schools and markets and restricted people’s movements.

This is not the first time an infectious disease has been framed as a national security challenge. Beginning in the 1990s, U.S. Vice President Al Gore cited HIV/AIDS as a security problem that “threatens not just individual citizens but the very institutions that define and defend the character of a society.”  Similarly in 2005-2006, some U.S. lawmakers juxtaposed avian influenza H5N1with nuclear proliferation, rogue states, and global terrorism and viewed it as a direct threat to security and prosperity in the United States. By mobilizing security apparatuses to deal with a virus that is not easily transmissible, the securitization of infectious diseases has been pushed to a new level.

Defining Ebola as a security threat has raised political awareness about an otherwise neglected health problem and galvanized strong national and international responses to the outbreak. Fear of a common threat (what political scientist Arthur Stein termed the “dilemma of common aversions”) creates a situation in which countries must act together to avoid mutually undesirable outcomes. In mid-November, approximately $1.2 billion had been committed to the fight against Ebola in the three most-hit countries. U.S. Ambassador to the United Nations Samantha Power said international aid efforts and awareness campaigns helped slow the spread of the virus in West Africa.

On the domestic front, the securitization of Ebola has also triggered dynamics that have persuaded policymakers worldwide to formulate a range of preparedness plans and policy actions aimed at strengthening disease surveillance and response capacities and speeding up work on an anti-Ebola vaccines and medicines. The United States, Canada, Russia, and China have all claimed to have developed or accelerated clinical trials of vaccines and/or treatments for the virus. Furthermore, since countries hardest hit by the virus have poor state capacity, sending the military (which has comparatively strong organizational and command-and-control capabilities) is instrumental not only to help build much needed treatment centers and mobile labs, but also to coordinate multisectoral and multinational efforts to contain the virus.

The same mode of discourse on Ebola and security nevertheless may increase public fear of the disease to a level disproportionate to actual disease-caused morbidity and mortality. As of November 14, 99.8 percent of the cases had been found in three Western African countries (Guinea, Liberia, and Sierra Leone), and Spain and the United States were the only two non-African countries reporting Ebola cases. And in the United States, only four confirmed cases thus far have been found, and none of those who contracted the virus in the country have died. Yet fear and anxiety spread much faster than the virus in the United States. The problem is that in evaluating risks posed by an infectious disease, public health professionals have to consider the compound probability of contracting the disease and succumbing to its effects, but the general public tends to respond only to the likelihood of death in the event the disease is contracted. In a securitized policy context, with the threat of an infectious disease heightened by political leaders and media outlets, this perception gap has been further expanded, leading to panic and overreaction to the disease.

If the securitization efforts are joined by more drastic government interventions, the fear and overreaction could impact the national and global economy. According to the World Bank, the vast majority of economic losses during a disease outbreak are attributed to uncoordinated and irrational efforts by the public to avoid infection.

The logic of securitization often works against effective risk management. A study published in the medical journal The Lancet estimated that the risk of Ebola spreading to the United States was only 13 percent of the risk of spread to the United Kingdom or France combined. The securitization approach, however, often leads to heavy-handed government interventions that do not differentiate actual risks posed to communities, states, and populations.

"Fatigue and complacency could combine to cause problems for sustaining existing anti-Ebola programs."

Indeed, it was not until the end of October that the U.S. Center for Disease Control (CDC) adopted targeted strategies that classify individuals into different risk categories. Also in October, Canada announced it would deny entry to foreign nationals traveling from Ebola hot spots in West Africa. Similarly, the governors of New York, New Jersey, and Illinois announced plans to quarantine all medical personnel returning from Ebola-ridden countries in West Africa. The same logic may fuel discrimination against certain groups of people. Some policymakers have called for tighter border restrictions, for fear that immigrants from Latin America may be carrying the disease, even though no confirmed cases have been reported in the region.

Second, by pinpointing an existential threat that requires an emergency response, securitization tends to push disease responses away from civil society toward military organizations and law enforcement agencies that have the power to override freedoms and civil liberties. This is especially troublesome if the military is used to enforce quarantine or other containment measures and target sick and exposed people—not the virus itself—as the presumed enemy. But even if the military is not involved in rounding up individuals suspected of carrying the virus, a securitized policy context could have the unintended effect of breaking the trust between the general public and public health authorities by encouraging civilians to shun public health officials and health workers. This has been a major concern in West Africa, where lack of trust in the government is a major factor behind the surge of the Ebola cases and deaths. In countries hardest hit by Ebola, health workers and clinics have come under attack from panicked residents who mistakenly blamed health workers for bringing in the virus.

Finally, securitization of the outbreak is not necessarily conducive for long-term health system capacity building in West Africa. It implies that health is less important than security and can only be justified in term of its impact on security. Once the epidemic tapers off, and the media spotlight is gone, the perceived impact of the virus on security would no longer be sufficient to justify strong political commitments and extraordinary public health measures. Fatigue and complacency could combine to cause problems for sustaining existing anti-Ebola programs.

Moreover, since “securitization” tends to focus on a particular disease, it also raises questions of fungibility and scalability. When huge resources are diverted to Ebola prevention and control, other public health challenges such as malaria and tuberculosis are neglected. The investment in vertical, disease-specific programs may not be able to translate into gains in overall health system strengthening. This we have seen in the aftermath of China’s 2002–2003 SARS crisis: the 1,200-bed hospital built to treat SARS patients was quietly abandoned once the crisis was over.

To sum up, while securitization might be necessary to address the ongoing Ebola outbreak, it may have negative impacts on socioeconomic stability, civil-military relations, risk management, and long-term health system capacity building. Instead of promoting a securitization approach to handling acute disease outbreaks, a more effective approach would be to frame disease control as a global public good. Under this new approach, countries would be obliged to contribute to an international capacity building fund—administered by the World Health Organization—and to use that fund to strengthen disease surveillance and response capacities in countries that fail to meet the requirements of the revised International Health Regulations. With a more robust health system capacity, these countries will be able to nip a rising pathogen in the bud. And if an outbreak was to evolve into a Public Health Emergency of International Concern as Ebola has, it should trigger an institutionalized (not securitized) arrangement that could lead to a surge of international assistance.

"Securitization of the outbreak is not necessarily conducive for long-term health system capacity building in West Africa."

On the domestic front, it would be more responsible and constructive to adopt a risk-based approach that tailors government interventions to the actual risks posed by the disease. The implementation of this approach, when combined with effective international collaboration, would maximize the protection of domestic population health while minimizing the disturbance the virus-spawned fear may cause to the economy and the society.

Book by Rachel B. Vogelstein and Meighan Stone July 13, 2021

Water scarcity threatens the health and development of communities around the globe. Climate change is intensifying the problem, pushing governments to find more innovative, collaborative ways to address water stress.