Since the start of the Greek financial crisis more than five years ago, the country has repeatedly defied predictions of a fast exit from the eurozone. But the moment of truth is approaching.

In January, after enduring a decline in living standards of fully one third, the Greeks elected an anti-austerity government that promised to stand up to the creditors; and the creditors have hit back, determined not to let one country abandon reform lest other electorates demand the same indulgence. Bad-tempered negotiations between the Greeks and their partners have deadlocked, with the populist Greek prime minister, Alexis Tsipras, accusing foreigners of "pillaging" his country. Barring a dramatic change of tune, Tsipras is evidently choosing to embody a cause, not lay the ground for a solution. 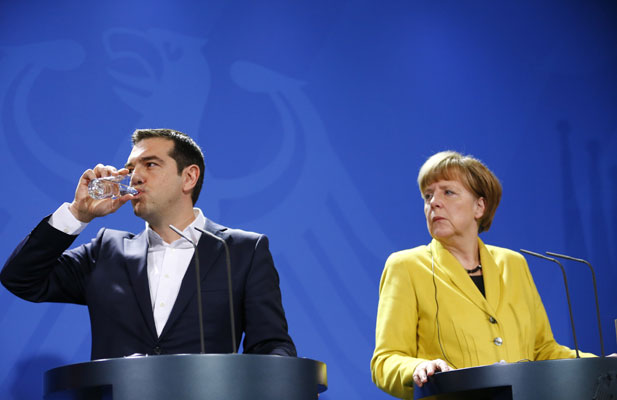 The Greeks now face a series of tests, any of which could precipitate the endgame. On June 18, the Greeks were due to meet with European finance ministers in hope of breaking the deadlock. The odds of progress seemed extraordinarily slim, given the recent tone from the Greek government. Assuming nothing comes of Thursday’s meeting, there may be another chance this weekend, when an emergency summit of eurozone heads of state may be convened to give a final chance for negotiation. After that, the Greeks will run into a series of debt-repayment deadlines. Without an agreement with the creditors that unlocks fresh international aid, they are unlikely to find the money.

The first repayment deadline comes at the end of June, when the Greeks are due to come up with a bit less than $2 billion for the International Monetary Fund. Nonpayment would raise questions about whether the European Central Bank will continue to support Greek private banks. Technically, the ECB is only supposed to provide liquidity to a bank that can provide good-quality collateral. But Greek banks’ main collateral consists of Greek government bonds. If the Greeks have just defaulted to the IMF, it will be hard to pretend that its bonds are worth their face value.

If the ECB curtails loans to Greek banks, they will be at risk of failure. Rational depositors will run, turning that risk into a certainty. The government will therefore have to counter by prohibiting withdrawals: There will be extended bank holidays, and a ban on taking euros out of the country. Meanwhile the government, deprived of the option of selling bonds to its own bankers, will have no choice but to pay civil servants and pensioners with IOUs—effectively, a new domestic currency. At this point, monetary union will exist in name only. A euro locked inside a bank in Greece will no longer be equivalent to a euro in Germany or Holland.

It’s possible, indeed likely, that the ECB would avert its eyes from the IMF non-payment to avoid tipping Greece into a death spiral. The central bank may pretend that the Greek collateral is good and so extend the banks’ survival. But then Greece will immediately confront a set of further tests. The government faces repayments to bond holders on July 10 and July 17; and then, on July 20, it must repay the ECB itself, to the tune of 3.5 billion euros. Again, the Greeks won’t find the money for this repayment unless they receive fresh foreign help. If they default to the ECB, it is hard to see how the central bank can continue to look the other way. Extend and pretend will be over.

Some commentators paint this as salvation. If the Greeks reneged on their unpayable debts, they would be shot of the burden that crushes their budget. Likewise, if the Greeks exit the eurozone and allow their new currency to fall, their export sector (tourism, mainly) would benefit; and the threat of a devaluation, which has deterred business investment, would be ended by the fact that the threat had become reality. But this interpretation of Grexit is almost certainly wrong. In reality, Greece outside the eurozone would risk becoming a failed state—not a welcome prospect for the Greeks, and nor indeed for the United States and its allies.

Why is the sunny interpretation of Grexit likely to be mistaken? Mainly because it assumes an unrealistic decisiveness from Tsipras and his fractious coalition. Theoretically, if Greece reneged on its debts to foreigners, it would shed a significant burden. But in practice, the Greeks are more likely to fall messily into arrears while promising to repay eventually, so the burden-shedding will be limited. Equally, a clean break with the euro and a sharp one-off devaluation might boost confidence in Greek prospects. But the idea that the Greek state is capable, on short notice, of introducing a credible new currency is a stretch. Rather than making a clean break, the Greeks are likely to move initially to the halfway house of using both euros and crude IOUs. The chaos would kill confidence, not boost it.

If Grexit would be terrible for Greece, what would it mean for outsiders? Worryingly, European leaders have answered this question too narrowly. The eurozone crisis has been sufficiently well managed to avert financial contagion, they believe: If Grexit destabilizes bond markets in Portugal, Spain or elsewhere, a swift infusion of liquidity from the ECB will quickly contain the problem. But the real threat from Grexit may lie elsewhere: not in markets but in geopolitics.

Greece may be a small economy, with a population of eleven million and output accounting for just 2 percent of the eurozone total. But it is a member of NATO. It might remain a member of the European Union. And it sits in a troubled part of the world: at the crossroads of the Balkans, North Africa, and Turkey. For all these reasons, the idea that a Greek meltdown won’t cause blowback for outsiders seems fanciful in the extreme. If there is one lesson from the past fifteen years of geopolitics, it is surely that weak states can affect Western interests powerfully.

Already, Tsipras has offered a hint of what might come if his country is cut off from further western aid and descends into chaos. In April, he visited Moscow to cozy up to Vladimir Putin; he denounced the West’s Russia policy while there, calling upon Europe to end sanctions on Putin lest they lead to a "new cold war." In the event of a ruinous Grexit, the Greek flirtation with Moscow might blossom into a serious affair. The West would then have to reckon with a NATO member that was friendlier with Russia than with its putative allies. Meanwhile, the EU would have to contend with a disaffected member state. This would not be good for the union’s already weak cohesion.

When it comes to exercising leadership in the world, neither the United States nor the European Union has covered itself in glory recently. A Greek tragedy would only add to the list of vexed challenges. For a comparatively small price, the creditors could give the Greeks the resources to avoid default and chaos. However maddening the populists in Athens, a Greece that crashes out of the eurozone could cause even more problems.