U.S. Secretary of State John Kerry declared in mid-March that the self-proclaimed Islamic State has committed genocide against Yazidis, Christians, and Shia Muslims, and crimes against humanity against others in territories it controls. The finding, which fulfilled a congressional mandate, does not appear to be a turning point in U.S. strategy to roll back the militant group, but does mark intensified efforts to document crimes for future prosecution, says the U.S. Holocaust Memorial Museum’s Naomi Kikoler. Insecurity and impunity in Iraq have encouraged the country’s various ethnic and religious communities to form militias that could spur future cycles of violence, says Kikoler, whose fact-finding trip to northern Iraq in September 2015 documented genocide against the Yazidi minority. 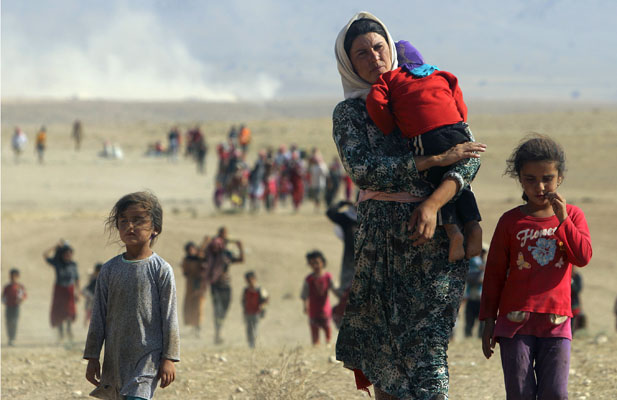 Displaced people from the minority Yazidi sect, fleeing forces loyal to the Islamic State in Sinjar, walk toward the Syrian border on the outskirts of Sinjar mountain in August 2014. (Photo: Rodi Said/Reuters)

Does Secretary Kerry’s declaration signal a shift in U.S. policy in Iraq and Syria?

A lot remains to be seen in terms of how the U.S. government interprets its obligations under the Genocide Convention and commitment to the responsibility to protect. We have seen some signs in the areas of documentation and the pursuit of accountability. It was the one part of Kerry’s speech where he outlined some next steps, albeit they sounded like very nascent steps.

The steps that have been outlined primarily involve seeking justice after the conflict has been brought to an end, although it’s not unforeseeable that ISIS leaders and fighters could be held responsible during the conflict for crimes against humanity or genocide. To do that, though, you have to arrest ISIS leaders, commanders, and fighters responsible for those crimes. The strategy so far seems to be to kill these individuals.

The bigger question is: Are we going to see atrocity-prevention considerations integrated into the counter-ISIS strategy? It would have two components: protecting civilians at risk of crimes perpetrated by the Islamic State, and preventing a recurrence of atrocities perpetrated by the Islamic State or by others that might emerge in its wake. It is unclear how the United States would address these responsibilities.

What would a strategy that incorporates atrocity-prevention thinking look like in Iraq?

We’re going to have to see an [international] commitment to rebuilding Iraq. That doesn’t just mean the physical infrastructure, but one that ensures that all communities have political representation at the local, regional, and national levels. There needs to be a guarantee of legal recourse so people don’t turn to guns and violence every time there is a dispute. My concern is that that burden is going to fall almost entirely on the United Nations and will likely exceed their ability.

“There’s resentment and fear on all sides. And there is vulnerability and legitimate concerns on all sides as well. The consequences are potentially dire.”

If we do not prioritize the physical and legal protection of these minorities who have been displaced, we may see insecurity again in northern Iraq in another five to ten years. Many of the people I met with—irrespective of whether they are Sunni, Shia, Yazidi, Christian, Kurdish—had experienced serious human rights violations in the past for which they never saw any justice. They do not believe that those who commit crimes will ever be held responsible, nor do they believe that the Iraqi security forces have the capacity to protect them. That is why many in these communities talk about the need for ethnic and religious militias, and it raises a host of additional security concerns that have to be taken into account. Where impunity reigns, violence proliferates.

At times people look at atrocity prevention as a soft kind of endeavor, whereas it should be at the core of counterterrorism work. We’re failing to recognize that one of the key drivers of conflict is the past commission of mass atrocities. There are warning signs one picks up looking for the threat of mass atrocities that suggest, for example, the rise of an entity like the Islamic State. In the failure to align the two, we aren’t tackling the underlying grievances that exist within particular communities that lead them to resort to violence or terrorism.

Your report highlights how a deep-rooted culture of impunity in Baghdad is at the root of northern Iraq’s current unrest. How do you go about changing that?

A first step would be for the UN Security Council to mandate international, independent investigations. There’s been virtually no effort made [by Iraqi authorities] to document crimes in accordance with international standards. Likewise, there’s been no effort made to preserve and protect forensic evidence [in liberated areas].

The area where I did most of my reporting is Nineveh province, in northern Iraq. Much of that area is disputed between the Iraqi government and the Kurdish Regional Government. The contested nature of that area created more vulnerability for minority groups to be targeted by the Islamic State. Now, as more land is liberated, we will see more mass graves and other evidence [of crimes, such as] the destruction of religious institutions. With the Iraqi government and Kurdish Regional Government unable to reach a resolution as to the disputed areas, it’s difficult to envision a future where those two entities will cooperate to pursue justice and accountability.

Efforts have been made by community organizations to document the atrocities. Though their efforts should be applauded, they’re the first to say that they don’t have the experience to do this type of work. The Iraqi government has taken no steps. The Kurdish Regional Government has expressed an interest, but they’ve also been clear that they lack the expertise. We need an international mechanism to make sure that there is a process to collect and preserve evidence.

The report also says that many displaced members of minority communities won’t return home without credible guarantees of protection. Given the record of Iraqi and Kurdish forces, as well as irregular militias, does that imply international peacekeepers would be required to facilitate their return?

Many people I interviewed said that when there had been joint U.S., Iraqi, and Kurdish monitoring units [until 2011] they felt considerably safer. That is a model that could exist in northern Iraq moving forward. Many others talk about the need for an international peacekeeping force. They have felt insecure for over a decade and feel abandoned by both the Iraqi and Kurdish security forces.

Does the focus on minorities risk that Sunni Arabs who have suffered in large numbers will see the United States as indifferent to their plight?

Insecurity has imperiled the lives of all Iraqis, and the obligation to protect [covers] all who are at risk of mass atrocity crimes. Sunni Arabs in areas that have been newly liberated from the Islamic State face additional risk of reprisal killings or displacement by the security forces and, in some cases, returning communities.

“At times people look at atrocity prevention as a soft kind of endeavor, whereas it should be at the core of counterterrorism work.”

It’s critical that we prompt a conversation about "the day after" in Sinjar now, and, for example, when we see Mosul taken or all of Nineveh liberated, to take into account the needs of the communities that were living under the control of the Islamic State. Many of the people I interviewed firmly believe that their Sunni Arab neighbors were complicit in the commission of crimes by the Islamic State. I also heard examples where Sunni Arabs protected their Yazidi and Christian neighbors, but the prevailing narrative is one where Sunni Arabs are demonized. There’s resentment and fear on all sides. And there is vulnerability and legitimate concerns on all sides as well. The consequences are potentially dire.

We also need to think about how to protect civilians living in places like Mosul, who may become victims in any effort to [liberate the territory]. How do we liberate the city without bringing untold harm to civilians, which may lead to future resentment of anti-ISIS parties, including the Iraqi government and the Kurdish Regional Government?

One of the horrific acts that the Islamic State committed was the large-scale sexual enslavement of women, primarily Yazidi women. I heard that the daughters and mothers of the people that I was meeting with had been taken to Raqqa, Mosul, and elsewhere in Syria and Iraq. More women are now being moved Mosul. The sense of these families is that they’re being moved there as human shields. It is increasing their sense of desperation over whether their loved ones will ever be free, or whether they might become the unintended victims of this difficult fight.

Do Iraqis believe Kerry’s declaration will change the nature of U.S. involvement?

It’s significant for the communities that have been affected to have their suffering recognized and for the crimes to be given a name. I think there is hope on their part that it will lead to additional assistance and, potentially, protection. Some hope it will lead to assistance for refugees seeking asylum overseas, and to some form of accountability for the crimes that have been committed.

With the climate in the United States and Europe generally unfavorable to refugees now, is there a risk that affected minorities will be disappointed by the response from these governments?

All too often the international community fails to meet local populations’ expectations. Many people don’t realize that the clear legal obligations associated with saying genocide has happened are somewhat limited. There’s [often] a misunderstanding about what states are obligated to do, and it’s reckless to raise expectations and not address them.

As gaps emerge, communities may seek to protect themselves, to arm themselves. It also leads people to take more and more dangerous avenues to seek asylum. There’s an onus on the United States and others to tackle the impasse around refugees and ensure that those who face persecution on the basis of their identity are given the opportunity to seek asylum abroad.

Last week Radovan Karadžić was convicted on a count of genocide, among other crimes, two decades after the siege of Srebrenica—the wheels of justice turn slowly. Can efforts to seek accountability bring more immediate benefits to victims?

Genocide prosecutions could be a significant deterrent for people who are considering becoming foreign fighters. It might also be a deterrent to local actors if lower-level individuals [are prosecuted in addition to leaders].

Pursuing accountability would also signal to Iraqis that impunity will not prevail. It would send an important message to minority communities that their request for justice will not be ignored, as so many of their other requests have been.