Skip to main content
Can Ukraine Pull Back From the Brink?

Ukraine is in the throes of its most serious domestic unrest in the post-Soviet period and could be on the precipice of civil war, says Adrian Karatnycky, a senior fellow at the Atlantic Council and a veteran human rights specialist. The escalation into fatal clashes has radicalized opposition forces, and President Viktor Yanukovich faces intense pressure to maintain the political status quo, he says. Yanukovich, the ruling political elite, and oligarchs also face pressure from Russian president Vladimir Putin to maintain power, but moderate elements in both camps still could opt to broker an agreement with the opposition that returns Ukraine to a balanced parliamentary system, says Karatnycky. 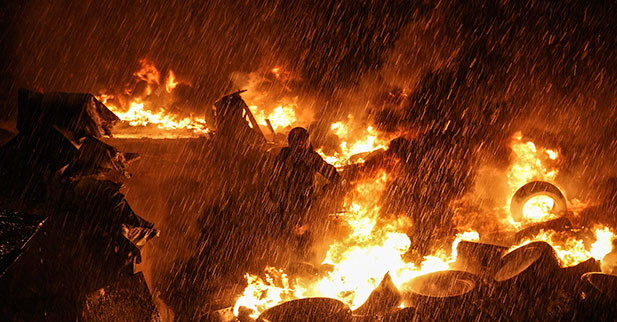 Former president Leonid Kravchuk has told parliament that the country is on the "brink of civil war." Is that correct?

The country is on the precipice of something that could disintegrate into civil war. I believe President Yanukovich underestimated the opposition and thought that he could crush and contain the protests and counterattack with tough legislation. It inflamed tensions, and there is a very radicalized population in the city of Kiev, which, at best, estimates say, is 90 percent hostile to the president. Half the country shares that kind of very sharp, harsh judgment of him. The authorities have resorted to excessive violence, which has led to several deaths, and this has further inflamed an already tough situation.

There are tens of thousands of Ukrainians in the opposition who currently are at the point where they believe that you need to respond with force if the state uses force. And there are, by many estimates, at least ten thousand to twelve thousand people that Yanukovich can summon right now to put down the protests and the opposition.

"A taboo has been broken with the shedding of blood and the deaths of protestors."

This is the most serious standoff and violent altercation that has ever occurred in post-Soviet Ukrainian history. Even in the period leading up to Ukrainian sovereignty, the late 1980s, there was nothing even resembling the Black Sunday crackdown that occurred in Lithuania. There was no loss of life from protests and demonstrations during the last years of the Soviet period, so a taboo has been broken with the shedding of blood and the deaths of protestors.

What could Yanukovich do to bring about a peaceful resolution?

He has no credibility, I would say, among Western leaders to honor his commitments. Nor does he have any credibility with the opposition, and even less with the streets and the most radical wing of the opposition protests. So the only way that matters can be remedied is if the moderates and advocates of real reform who exist in the Party of Regions [the main governing party], and the oligarchs who support the Party of Regions and have many deputies that they support, exert pressure and establish their independence from the president’s own team and work with the opposition to establish solutions through dialogue inside the parliament and a step back from the hawkish policies that the president and his team have chosen to implement.

There’s a lot of pressure on Yanukovich from Putin, who’s made an initial investment in shoring him up economically to regain control. So the problem is that it’s not just being decided primarily as a Ukrainian issue, but the Russian hand is part of the calculation. At the same time, pressure from the West—the countervailing pressure—seems to be relatively absent.

Ukraine has a large amount of short-term debt. It must repay the IMF a little under $4 billion in the next twelve months, and it owes Russia $3 billion for gas. It’s received a first tranche of $3 billion from Russia in exchange for Ukrainian paper and bonds, and it’s received a reduction in the cost of fuel, part of which has been passed back to the industrial sector. Russia is in for not a huge amount, but that amount was very helpful for the short-term period. There were reports of a discussion between Putin and [Russian prime minister Dimitri] Medvedev in which it was said that until a Ukrainian government takes shape, Russia should hold back until they understand what kind of economic policies are being pursued. That’s code for Russia will hold back any further assistance until they see whether the crackdown leads to the stabilization of Yanukovich’s power or leads to the stabilization and insertion of pro-Russian politicians into the leadership of Ukraine.

The rights of Ukrainians got a mention in President Obama’s State of the Union speech. How do you think this dispute registers in the United States?

[Yanukovich] really only thinks of Russia and the United States as these big, powerful interests that command his attention. So the fact that [the Obama speech expressed] support of the nonviolent component of the protest movement struggling to assert their rights and to fight back against injustice, it was just the right thing. The United States is going to be on the margins of this for the moment. It can be helpful if there is a need for an economic bailout, post-settlement, separate and apart from Russia.

"We’re not facing a situation in which there will be a simple collapse of Yanukovich’s authority and then a vacuum where, as in the Orange Revolution, the other side takes over."

I don’t think I can predict what the ultimate settlement will be, but the oligarchs may find it very hard to withstand Russian pressure. We’re not facing a situation in which there will be a simple collapse of Yanukovich’s authority and then a vacuum where, as in the Orange Revolution, the other side takes over. His support may disappear into a negotiated and controlled resolution in which the interests of the oligarchs and people who have backed Yanukovich will also be taken into account.

What should we look for next in terms of any tipping point?

The amnesty law would be one step of goodwill. The other step would be the creation of a new majority or a faction inside the Party of Regions that basically says, "We are operating as a separate and coherent group seeking a middle ground, a negotiated settlement, and maybe new leadership in the parliament that is not guilty of falsifying the vote and is also not seen as being hand-in-glove with Yanukovich, but is independent of him." Those would be very positive steps, further back from the precipice, and they would potentially presage a broader political solution, which would then bring a new constitution or a reversion back to a parliamentary system and trigger new elections, probably only after the summer and after an interim caretaker neutral government to ensure that there is no slippage on any agreements that are negotiated.