Skip to main content
A Cautionary Note on Iran

Two recent reports by the International Atomic Energy Agency--one on Iran’s nuclear program (PDF) and one on Syria’s (PDF)--have increased concerns about Middle East nuclear proliferation. Nuclear expert Matthew Fuhrmann says that while "Iran’s behavior is consistent with past behavior of proliferation," there is no definitive proof it is pursuing nuclear weapons. The United States should oppose Iran’s nuclear program, Fuhrmann says, but the case of China--which became a nuclear country yet has not posed a threat to its neighbors--should temper concerns about a nuclear Iran. "[There were] claims about China becoming more aggressive, starting regional wars, causing cascades, where everyone in the region was going to build nuclear weapons--all of the things we’re hearing about Iran today," says Fuhrmann. "But none of that happened, or very little of that happened once China built nuclear weapons."

Iran has been subject to a new round of Security Council sanctions, but have they had any impact?

We’re basically at the status quo, but Iran has cooperated in some limited ways. For instance, when the first IAEA reports started coming out, following the revelation of the Natanz plant in 2003, Iran did [allow] additional inspections, allowing access to sites that had not previously been visited. But big outstanding issues remain, such as the uncertainty surrounding the military involvement in the program--such as the laptop computer that was recovered, which contained evidence suggesting that Iran was doing research and development on putting a nuclear payload on a missile.

And in addition, the revelation earlier this year of a second "secret enrichment plant" near Qom, officially called the Fordow Fuel Enrichment plant?

That’s obviously a major cause for concern.

The report says Iran continues to enrich uranium from 3.5 percent and now up to 20 percent. That’s nowhere near weapons grade, but the United States, Western European countries, and Israel keep expressing concern that Iran is planning a nuclear weapons program. Would anything in these reports dispel that?

No. Based on the information in these reports, we can conclude that Iran’s behavior is consistent with past behavior of proliferation. For instance, as we learned from Iraq, Libya, and Syria, the construction of covert nuclear facilities is typically only associated with covert nuclear weapons programs. With that said, we [also] need to be a little cautious because there is nothing in these reports that says definitively that Iran is pursuing nuclear weapons.

My own view is that we should do what we can to oppose the program, but it’s dangerous to assume the worst-case scenario, because it puts one in a situation where the mentality is to warn Iran to stop the program "or else."

The IAEA also issued a report about Syria’s program. Syria had a facility bombed by Israel in 2007, although Israel has never publically acknowledged this. The United States has issued information suggesting this was going to be a nuclear weapons facility, helped by North Korea, which already has tested nuclear weapons. How do you see that problem?

For the agency, Syria and Iran pose different problems, and the reason is that the Israeli strike against the al-Kibar plant in September 2007 was really an indictment of the agency’s safeguards regime. And the agency took that very personally and now feels obligated to get in there and do something about the problem to show that it still has some sort of institutional credibility and authority, and that countries can in fact have some confidence in the safeguards regime. Iran is also obviously a problem, because it has on a number of instances defied IAEA safeguards, but from the agency’s perspective these are two related but distinct problems.

In another words, Syria isn’t in the business right now of making anything nuclear, since they have no obvious facility.

Well, that we know about, right? I mean the al-Kibar facility was unknown until it was bombed. But as far as we know, you’re right. There are no facilities other than a small research reactor.

There is a constant drumbeat of voices, both in the United States and in Israel, suggesting that the only alternative that’s left with Iran is military force. But many others say it wouldn’t be effective and would just touch off a wider war. What’s your feeling about that?

We need to be extremely cautious when thinking about military force as a potential instrument of counter-proliferation. History does suggest that under certain conditions past strikes have delayed the target state’s ability to build nuclear weapons [such as Israel’s bombing of Iraq’s reactor in 1981], but any potential benefit a country might accrue from a nonproliferation standpoint has to be weighed against the possible costs. 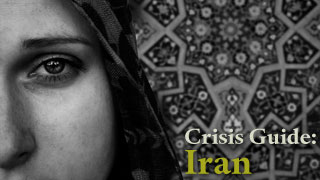 We also need to think more systematically about what a world with Iran having nuclear weapons would look like. The conventional view is that it would undermine regional and international security, and that may be true, but it’s also possible that things wouldn’t turn out so bad as a lot of the alarmists are implying. We don’t really know.

It’s one thing to talk about engagement, and how that might be an effective policy - and it may very well be - but it’s not as easy as reaching out a hand and hoping that that hand will be reciprocated.

But there is a historical analogy here, and that’s China. If you read a lot of the documents that have now been declassified about China’s nuclear weapons program in the 1950s and early 1960s, everything people were saying in the U.S. national security establishment was very alarming. Claims about China becoming more aggressive, starting regional wars, causing cascades, where everyone in the region was going to build nuclear weapons--all of the things we’re hearing about Iran today. But none of that happened, or very little of that happened once China built nuclear weapons [China first exploded a nuclear device in 1964]. It’s possible that some of the things people are worrying about will materialize if Iran proliferates. My own view is that we should do what we can to oppose the program, but it’s dangerous to assume the worst-case scenario, because it puts one in a situation where the mentality is to warn Iran to stop the program "or else."

You’re saying we should continue diplomatic efforts to try to persuade Iran to be more forthcoming on its nuclear program?

Yes, and certainly we should do what we can from a U.S. standpoint to curtail the program. A lot of what the United States and other countries have done, most of it covert, has been at least somewhat effective. As evidence I would state the fact that Iran has been trying to build nuclear weapons since 1987, and we don’t know for sure whether they’re still trying but certainly they were up until 2003, and that’s a long time--twenty three years. When you compare that to Pakistan, a country of similar economic development, Pakistan developed nuclear weapons within fifteen years. They started a program in 1972, and by 1987 they had a least one intact bomb. This suggests that some of what the United States and other countries have done covertly to try and delay the program has been at least partially effective. And also export controls have denied Iran a lot of civilian nuclear assistance.

You talk about the covert activity. What do you mean?

I don’t know the extent to which such programs have gone on, but it’s been reported that the international community has done things like let Iran obtain faulty centrifuge plant designs, or allow them to receive assistance that was known to be technically flawed. This is believed by some to explain why they had difficulties early on in terms of being able to enrich uranium.

Last fall in Vienna, Iran agreed to trade most of its enriched uranium in return for higher-enriched uranium that would be made in Europe and that would be used for Iran’s medical reactor in Tehran. After this was agreed to, it was rejected in Iran. More recently Brazil and Turkey worked out a similar deal with Iran. The United States and its European allies did not like this agreement. Has this agreement just died on the vine?

It appears to be the case. At this point there’s simply a lack of trust between the United States and Iran that goes in both directions. When you have so little trust or confidence in a country, it’s understandable why you might be reluctant to allow it to have higher levels of enriched uranium on its soil, even if there are plans to have it returned to another country.

The Obama administration came into office interested in a direct dialogue with Iran. What’s happened to those efforts?

The administration has realized that it’s harder than it sounds. It’s one thing to talk about engagement, and how that might be an effective policy but it’s not as easy as reaching out a hand and hoping that that hand will be reciprocated.

The Iranians’ own policy seems to be unwaveringly anti-American.

The opinion of the United States by the Iranian people is not unfavorable. [But] certainly the government doesn’t have much trust in the U.S. government, and oftentimes it’s helpful to think about things from their perspective. This is a country that since 1979 the United States has done many things to undermine: to deny it the ability to obtain nuclear technology for peaceful purposes, which or may or may not have been a good idea. But from Iran’s perspective this was something they were entitled to under the Non-Proliferation Treaty.

There are a number of other things that from Iran’s perspective threatens its security. For instance, part of the narrative you hear if you talk to Iranians is that they were cooperative before and during the invasion of Afghanistan, and in fact, provided some tactical military support for the initial military operations, and then, you know, shortly thereafter they’re thrown into the "Axis of Evil" speech in President Bush’s State of the Union address. So from Iran’s perspective, here’s an instance where they’ve reached out, extended a cooperative hand, and that’s in turn followed by provocative rhetoric. From the perspective of both countries, there’s simply just a lack of trust. That’s why it’s been hard to get any kind of dialogue going.