President Obama’s announcement that he will expand the military campaign against the Islamic State in Iraq and Syria marks an appropriate reaction to a gathering threat to U.S. and world interests, says CFR President Richard N. Haass. But the president’s stated goal of destroying ISIS is unrealistic, and his emphasis on working with the Syrian opposition appears questionable, Haass says. To build the capacity to degrade ISIS in both Iraq and Syria, he says, the Obama administration will need Sunni Arab countries as well as Iran and Russia, which can play a role in influencing Syria’s Assad regime. Haass also said he expected a modest surge in U.S. forces into the area, including Special Forces.

What was your impression of President Obama’s speech, which was billed as a very important policy statement on how to destroy ISIS or the Islamic State?

My reaction was mixed. What I liked was the expansion of the attack on ISIS beyond simply protecting American personnel and humanitarian concerns. There was the recognition that ISIS represents a serious strategic threat to American interests in the region and around the world. And, secondly, I very much support the possibility and the likelihood that the United States will soon expand its attacks from the air against ISIS across the border into Syria.

Is that a smart move?

That makes sense because you can’t fight an organization and allow them a sanctuary. What I was not comfortable with in the speech were a few things. One was the use of the word "destroy." That is not a reasonable or helpful goal to set, any more than you could destroy or totally eliminate disease. I don’t think we ought to define our goals in terms that we can’t possibly meet. We want as much as possible to degrade or weaken a terrorist movement, but I don’t think we want to make its complete eradication a goal, not because it wouldn’t be desirable but simply because it’s not achievable.

What other problems did you find?

One is the explicit comparison of what we’re facing with ISIS in Iraq and Syria, with what the United States is doing in Yemen and Somalia. The Yemen and Somalia situations are much more modest in scale. ISIS is not simply a terrorist organization but as the Secretary of Homeland Security said at the Council on Foreign Relations on Wednesday, ISIS is also an insurgent army. So we need to set a scale of effort on our part far larger than anything that is being undertaken or contemplated in Yemen or Somalia. Most important, I was actually surprised at the emphasis the president placed on building up the Syrian opposition. 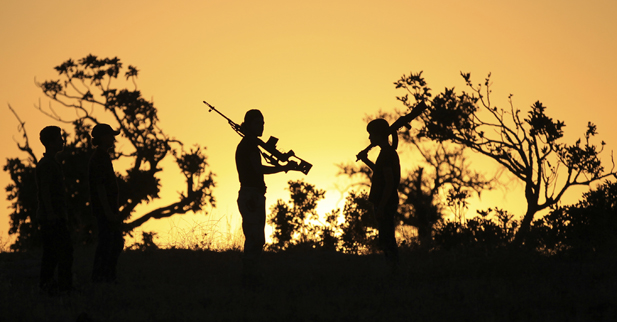 Free Syrian Army fighters carry their weapons on one of the frontlines of Wadi Al-Dayf camp in the southern Idlib countryside, September 5, 2014. (Photo: Khalil Ashawi/Reuters)

I simply don’t think there is much raw material there. It is divided. It is weak. Any effort to build it up would take years, and I don’t think we’d have much to show for it. There are other alternative ways to building up an essential ground partner to what the United States might do from the air, and the president didn’t develop those ideas.

Do you think the United States is going to have to send in ground troops even though there is a standing promise by the president of "no more boots on the ground"?

In Iraq, we already have a thousand-plus American advisors, and my guess is that with time that number will go up as we arm and train not just the Iraqi government but also the Kurds, the so-called Peshmerga, and various Sunni tribes. You will need people on the ground to facilitate the work of American aircraft. My guess is that we’re going to have not combat troops but a larger number of American forces in a supportive role in Iraq. In both Iraq and Syria, while we will not station troops on the ground, we will need to introduce Special Forces against "high value" targets in which they are the best or only way of reaching and killing them.

So you don’t really think the United States will be able to destroy ISIS just through air strikes, as President Obama vowed.

You need a local partner. In my view, the possibilities for Syria are local Sunni tribes and Kurdish forces, along the lines of what is being done inside Iraq. Ideally, you would get some ground troops from some of the Arab countries, conceivably Saudi Arabia or Jordan or even Egypt at some point. One has to go in those directions rather than pin a lot of hopes on building up a secular, moderate Syrian opposition force.

You were involved in the first Iraq war in 1990–1991 under President George H. W. Bush. It took a long time to start the allied offensive because the United States went out of its way to line up almost every country in the world to fight against the Iraqis. Do you think this will take an equally long time?

Because ISIS is quite entrenched in both Iraq and Syria, it will take a long time to build up Iraqi capabilities to take them on, and it will take an even longer time to build up ground capabilities inside Syria. So we’re going to need a diplomatic effort that will, among other things, gradually increase the participants in any coalition and the significance of what the participants bring to the efforts, particularly inside Syria. And we’ll also need a diplomatic supplement.

We’re going to need not just the Sunni Arab countries but conceivably Iran and Russia and others. It may be necessary to come up with some arrangement to enable us to focus on ISIS. There may have to be some tacit understandings, however conditional, with the Assad government, and that would require the participation of a kind of contact group, or a more formal group, that I believe would need to include the Sunni governments in the region, as well as Russia and Iran.

That would be a very interesting alliance. Of course Russia and Iran are the strongest supporters of Assad’s government. Do you think we should re-establish our embassy in Damascus? We don’t have any diplomats there.

There’s no need for direct contact with the Syrian government. I don’t see the Syrian government playing a role beyond the area dominated by Alawites. But that leaves the bulk of Syria up for grabs, and one needs a military strategy as well as a political strategy to be successful in liberating it from ISIS. The goal cannot be to liberate territory from ISIS only to hand it over to the Assad government. We should liberate land from ISIS and hand it over to some sort of a Sunni entity that is willing to govern and treat the people there on terms that we can accept. All of this needs to be worked out. And I wouldn’t assume that Russia and Iran are totally hostile to everything we might want to do in Syria or Iraq because they have an enormous interest in seeing that ISIS does not gain momentum. Iran has made a major investment in Iraq and is vulnerable to a radicalization of the Sunni world. And 10 or 15 percent of the Russian population is Muslim, and they don’t need to see a radicalization of the Muslim world. So I wouldn’t write off the possibility of some form of limited cooperation or at least parallelism from both Moscow and Tehran.

The president didn’t talk too much about seeking congressional backing. Is he going to need this to ramp up this battle?

To say he needs it is probably too much. To say it’s desirable is more accurate. Because of the War Powers Act, he can do what he wants to do through the November election. There’s a chance that after that he might go for some type of new or limited gesture of support from Congress.

I don’t know if he’ll necessarily go for authorization from Congress because that would imply he doesn’t have the authority now. Earlier you introduced the 1990–1991 parallel. President [George H. W.] Bush did not go to Congress for authority to liberate Kuwait. He thought he had all the authority he needed and in my view rightly so. He simply asked Congress for support of actions toward that end.

Did you think Obama overstated the new unity of the Iraq government? They’ve just started. They don’t even have a Defense Minister yet.

The principal omission of the speech was what would be our ground partner in Syria. The second weakness of the speech might be the confidence about the unity and capacity in Baghdad. I am somewhat skeptical of what the central government will be willing and able to do. I would love to be proven wrong here but a lot more of our potential support in Iraq will come from the Kurds and from Sunni tribes that we can reestablish relations with and hopefully rebuild their confidence in us.

Did he make a case that ISIS is a threat to the United States? He didn’t really talk about that too much.

He did mention that ISIS is potentially a threat to the homeland, and that’s a message that Americans have internalized. We’re marking the thirteenth anniversary of 9/11, and a shockingly high percentage of Americans became aware of the two beheadings of the journalists. Americans understand that we are clearly vulnerable to individuals and groups like this and that we had best take them seriously.

To use a legal expression, it’s a form of preemptive self-defense. We need to go after ISIS before they go after us. I don’t think that anybody who’s being realistic would think that a group like this is self-limiting, that it won’t go after Americans or the American homeland. We have to believe that they will if they can. And the goal of American foreign policy is to make sure they don’t have the opportunity.

Ten Elections to Watch in 2021

America Is Drifting Toward an Iraqi Future

Once a country loses its sense of national identity, a national unraveling is often not far behind.