The international community is increasingly concerned about whether Afghan President Hamid Karzai can be an effective partner. Karzai recently won another term after an election fraught with accusations of fraud; his previous term was beset with allegations of corruption.

CFR’s Edward R. Murrow Press Fellow Kim Barker, who has just returned from a trip to Kabul, says Afghans are disillusioned with Karzai’s election and are increasingly worried about his dealings with warlords. The Obama administration has yet to decide whether to increase the U.S. troop presence in Afghanistan. Barker says most Afghans don’t necessarily think they need an increase in foreign troops, but would prefer more Afghan troops that are better trained. "At the same time," she says, "there’s a real fear [in Afghanistan] that the United States is just going to walk away."

What is the political situation in Kabul since President Hamid Karzai’s reelection? Are there efforts to form a unity government or include more reformers in the cabinet? Are we going to see a stronger opposition?

We’ll have to wait and see. President Karzai is figuring out who’s going to be in his cabinet. He’s kept very quiet [about] what he’s going to do. He’s made a lot of promises to warlords and strongmen, powerbrokers as they’re called in Afghanistan: [promises such as] a certain number of seats, a certain number of ministries, [or] a certain number of governorships. The West is watching very carefully to see what he says during his inauguration speech this week. They’re watching to see who he actually nominates to these positions.

The real worry is that he’s made all these promises to these powerbrokers and that he’s going to put in people who aren’t necessarily qualified for each job. People I know in the presidential palace say, "Yes, he’s made these promises, but he also has wiggle room with these promises." They believe that the international community should not be quite as worried or invested in who he’s going to pick. [But] Afghans are incredibly worried about these promises that have allegedly been made to the warlords. And if there’s a constant drumbeat that is coming out in Afghanistan right now, it’s from Afghans, it’s from the international community. It’s from everybody but [those] inside the presidential palace: "We do not want these warlords anymore; we actually want people qualified for the job. We’re sick of these promises; we’re sick of this way of doing business; we’re sick of corruption." They want people who are actually able to do the job.

In terms of having some sort of unity government where you have [Karzai rival Abdullah] Abdullah involved, Abdullah has pretty much ruled that out. That could always change. It’s Afghanistan, and things are always changing there. If Abdullah does not join the government, he will try to form a robust opposition that’s not just saying things against Karzai but is actually proposing things to do differently than they’ve been in the past. You’ve got Afghans who are very disillusioned with everything that’s happened and very resigned to what has happened. And you’ve got an international community that is very worried about whether they actually have a partner they can work with in President Karzai.

On Monday the Afghan government announced the launch of an anti-corruption unit. The announcement came on the heels of U.S. Secretary of State Hillary Clinton’s remarks that future civilian aid will be tied to greater efforts by the Karzai administration to combat corruption. Do you think the Karzai government is taking serious steps toward combating corruption?

In terms of fighting corruption in Afghanistan, it’s a lot like fighting drugs. [This is] the third unit they’ve set up to fight corruption in Afghanistan. They’re talking about setting up a separate court like the drug court they set up, as if the drug court is some sort of model that they should be following. It’s [actually] been plagued with corruption. One of the top appeals judges there was shot dead about year and a half ago, and he was somebody who was actually fighting drugs. 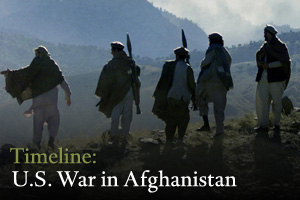 There are people in the government that would like to make a difference against corruption and would actually like to end this way of doing business. But it’s so endemic. It’s not like a separate unit is actually going to change things. They need to make this across the board through all the [ministries]. ... They need to change the way of doing business. They need to improve salaries for police officers. They need to arrest some big fish. If they were just to take one big guy--take a relative of a top official, take a top minister in the government that’s getting kickbacks. Make an example of him. Put him on trial and actually get some sort of rule of law and some justice with this one person. You’re going to see that go a long way toward fighting corruption.

What then should the United States and the West look for in terms of improvement in governance and security?

Western officials say, "We’ll know it when we see it." There is no list of benchmarks. There’s no list of things you can have in a country as complicated as Afghanistan that you could actually check a box as to when one of these are achieved. It’s more like having a sense that things are now moving in the right direction. It’s a smell test, and that’s what they’re looking for.

The Obama administration is still deliberating whether to increase U.S. troop presence. How do the Afghans regard the U.S. forces currently in Afghanistan, and how do they feel about an increase in troops?

It depends on the Afghan you talk to. But I would say the consensus is, "We don’t necessarily need more American troops here. What we need is more Afghan troops, and we need a better way to get those guys trained and actually working for us." At the same time, there’s a real fear that the United States is just going to walk away. The whole idea that Afghans don’t want [the United States] there and actually think it’s time for it to leave and view it as an occupying force is incredibly incorrect. But there is a fear that if [the United States] actually increases the number of troops, then [it will] start to be viewed as an occupying force, especially in the south.

How do they feel about the Obama administration’s strategy in the region?

What is the extent of central government control? It has often been said that the government has limited writ and does not hold sway beyond Kabul. Is that still true?

How do Afghans feel about this new government?

They’re just very disillusioned. Having gone to Afghanistan since January of 2002, I’ve never seen the mood as negative in Afghanistan, in Kabul. They feel like the United States is in league with Karzai, that the United States put Karzai in. They also feel that the United States is actually in league with the Taliban. There are all these conspiracy theories going on right now, and they’re all very strange, and none of them necessarily make sense with each other. What you really are left with is a sense that they just feel like democracy did not work this particular time. And they feel like nobody listened to them, like this government is illegitimate.

What needs to happen to turn the tide?

Afghans are really looking for the same thing that the international community is looking for. They’re looking for there to be a real signal of change from Karzai in terms of how he actually handles corruption and in terms of his new ministries--who he appoints to the different cabinet positions. If he goes with more technocrats, the people who are seen as better administrators, that will send a signal toward Afghans that it’s no longer business as usual.