U.S. Secretary of State John Kerry and Russian leaders have agreed to seek a new international conference to end the war in Syria, but Stephen Sestanovich, CFR’s top Russia expert, says success will depend on whether "the Russians are prepared to tell [Syrian president Bashar al-] Assad and his supporters that the jig is really up for their regime." Referring to the broader U.S.-Russia relationship, he says the Syria talks indicate a slight rebalancing of ties and that Kerry tried to avoid riling the Kremlin with any criticism of the domestic political situation. It remains unclear, he said, how Russia will respond to the administration’s new push for arms control talks. 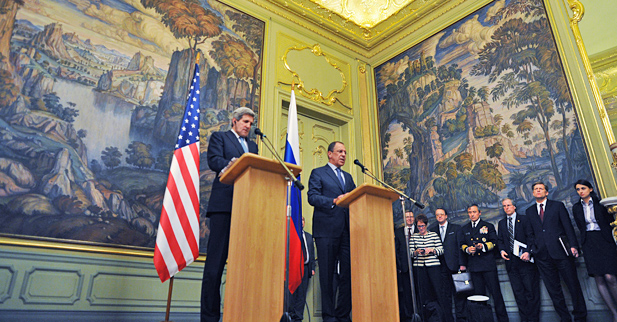 Secretary of State John Kerry met with President Vladimir Putin and Foreign Minister Sergei Lavrov in Moscow this week, and the two sides announced they will work to convene an international summit to end the fighting in Syria and get the Assad government and the rebels to sit down at the same table. This has been tried before and hasn’t worked. Is there really much enthusiasm on the Russian side for this?

"Enthusiasm" would be stretching it. For two years, the Obama administration has been appealing to Moscow to take a different line on Syria, asking them to distance themselves from President Bashar al-Assad, to support UN Security Council resolutions, with more or less no results. Now there seems to be this new development, and the question is: What produced it?

One thing that has changed in the Syria equation is greater cross-border violence with these recent Israeli attacks aimed at weapons headed for Hezbollah in Lebanon, the reports of chemical weapons use, and probably most important: the greater seriousness with which the United States is considering arming the rebels. That suggests the possibility of a change in Western policy, and it puts pressure on the Russians to reconsider their position or risk being passed by as Western powers take a more activist role.

Lavrov said Russia is not committed to any one leader in Syria, which was not exactly a vote of confidence in Mr. Assad.

They’ve been saying that for some time--that was actually the formula of last summer’s Geneva agreement (PDF), where the leading outside powers called for a negotiated transition, and the Russians insisted they weren’t putting their finger on the scales for Assad or his supporters. The Geneva formula has never gone anywhere, but it has been a kind of fig leaf for the Russians to insist that they’re actually for a resolution of the political conflict. This week’s agreement on a peace conference moves the Geneva formula one step further, but what is one step beyond complete meaninglessness? The real issue is whether the Russians are prepared to tell Assad and his supporters that the jig is really up for their regime.

This week’s agreement on a peace conference moves the Geneva formula one step further, but what is one step beyond complete meaninglessness?

In 1999, the Russians told Serbian leader Slobodan Milosevic that they were not going to back him any longer on Kosovo, but the difference was then that Milosevic could back down from the confrontation over Kosovo without losing power--at least not immediately. However, in the case of Syria, the entire question is whether Assad goes, so it’s a little harder to have a peace conference about that.

There’s going to be a lot more reluctance on the part of the Syrian government to attend such a conference, but I would say there is going to be more hesitation on the part of the Kremlin to tell the Syrian government they have to take part or else Russia will back the other side. And there is an interesting issue here: Kerry said if the conference makes progress, there wouldn’t be a need to arm the opposition--and that suggests the possibility for a little bit of mischief where the Russians could use the conference to block a decision by the United States and other Western powers to arm the rebels.

And another problem is the United States has to persuade the Saudis and the Gulf States to get the rebels, whom they are arming, to the table.

There are many different groups. Remember the long delays in peace negotiations over Vietnam over the shape of the table--that was really about who would be represented and in what capacity. So attendance to this conference is going to be a central issue affecting whether or not it ever takes place.

Does the fact that these two major powers have agreed on this Syrian effort indicate a warming of their relations?

Kerry was obviously very mindful of that issue in all of his comments in Moscow. He went out of his way to do the gracious things: laying a wreath at the Tomb of the Unknown Soldier, meeting with veterans, and acknowledging the Russian role in World War II. And while he said there had been some disagreements, he noted that on what he called "really important issues," there had been cooperation, and said it was important to keep our eyes on our strategic interests.

So there is a little bit of a rebalancing there. In the priority of different issues, Kerry is trying to say, "Let me focus on the key geopolitical questions, and we’ll let some of the other disputes move at their own pace." He did meet with representatives of civil society, and the leaders of those groups went away satisfied with what they heard from him. But there’s a certain shift of emphasis away from Russian domestic political questions to geopolitical issues, and that’s probably a relief for the Russian government.

Obama’s been talking about another strategic arms agreement, and there’s also this question of missile defense. Where do these issues stand?

Obama indicated an interest in further arms reductions in a letter that was delivered to Putin last month by Tom Donilon, the president’s national security adviser. And the Americans made clear in briefing reporters that they were hoping there would be an answer to this letter in Kerry’s visit. I haven’t seen any public reference to that, but it could be that there’s a lot of internal Russian sorting out that has to go on before they decide how and whether they want to take the next step on any arms discussions. They have to decide whether they are satisfied by the adjustment in the administration’s ballistic missile defense plans, or whether they want to keep treating this as a fundamental threat to their security.

There’s a certain shift of emphasis away from Russian domestic political questions to geopolitical issues, and that’s probably a relief for the Russian government.

This is the administration’s plan to beef up missile defense in Alaska and reduce the emphasis on eastern Europe?

Right. For the Russians, this has been a neuralgic issue, one could say, for forty years since the [Anti-Ballistic Missile] treaty. And it has been particularly contentious in the past few years under the Bush and then the Obama administrations. The Russians keep insisting that U.S. missile defense plans, even though designed to cope with very small threats from potentially Iran or North Korea, undermine their own deterrent. And that’s an issue that has made it difficult for the two sides to cooperate on missile defense, which American administrations have proposed for some time.

It’s been a year since Putin returned to power as president. What’s the mood like in Russia these days? Is the economy thriving? There are no huge rallies anymore. Is that because of repressive tactics?

Let me start with the economy because it has important implications for the rest of it. Plenty of Russians say that the economy is entering a recession, and that this is, in part, an effect of the eurozone crises, because Europe is Russia’s largest trading partner. But many other Russians say it is a confirmation that the Kremlin’s economic strategy is flawed, and that the government hasn’t pursued reform in a serious way. Because of that and other reasons, the elite remains divided. So while Putin managed to claw his way to reelection last year, there’s a real lack of conviction in the elites that he has an idea for how to move the country forward. And you saw some of that in the annual call-in show that Putin did last week.

Yes, and in it, Putin showed himself on top of the most minute problems in the most obscure localities. The moderator at one point said to him, "It seems as though no problems can be sorted out without your involvement." At the same time, they also felt obliged to bring on to the program critics of Putin: former finance minister [Alexei] Kudrin came on to tell Putin that his halfway reforms will not work; a military journalist came on the program to raise the issue of deep corruption in the defense ministry; an independent radio journalist came on to complain about Stalinism in Russian politics. So it was a weird mix of proof that Putin is utterly dominant but vulnerable at the same time. The notion that you had to bring on three critics like this to tell him face-to-face that the country is not reforming and even possibly becoming Stalinist is astonishing. It tells you a little bit about the kind of schizophrenic character of the Putin system right now.