The November 4 midterm elections could shift the balance of power in the U.S. Congress, where Republicans dominate the House of Representatives and Democrats hold the majority in the Senate. James M. Lindsay, CFR’s director of Studies, notes that while Congress has heavier influence on domestic than on foreign policy the next group of lawmakers will likely play an important role on any Iranian nuclear deal, advancing major trade talks, and new defense spending. 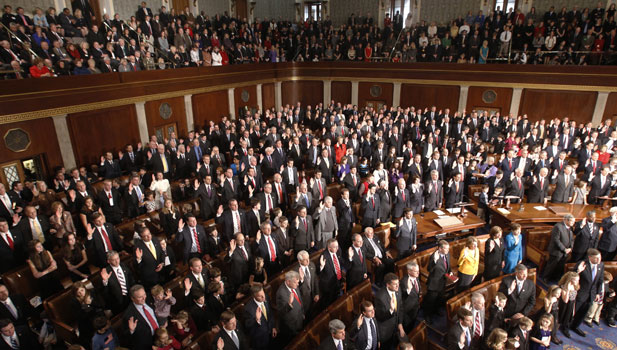 In the House, Republicans look poised to add seats, further widening their majority [there are currently 233 Republicans, 199 Democrats and three vacancies]. The big question is what happens in the Senate [there are currently fifty-three Democrats, forty-five Republicans, and two Independents]. There are three possible outcomes: the Democrats manage to maintain a narrow lead in overall seats; Republicans take majority control of the Senate; and perhaps most perplexing, is if we end up with independent senators holding the balance of power. The first outcome in which Senate Democrats retain control will likely lead to continuation of the status quo as we’ve experienced it over the last couple of years. The third outcome, where the balance of power is held by independent senators, takes us into uncharted waters. How that would play out would depend upon which party the independent senators chose to caucus with. And finally, the second outcome, [in which] Republicans win, is the one which could potentially shake up political dynamics in Washington.

How would this affect the President? He’s got two years left. In the last two years of an incumbent presidency, usually he can’t really do much anyway, right?

The optimistic scenario is that the White House and the GOP Congress decide that it’s in their interests to work together. They bargain hard, they trade political charges, but at the end of the day they cut deals on issues like tax reform, infrastructure, and defense spending. In this optimistic scenario, what drives decision making is a political calculation on both sides that, whatever differences they have on policy, it’s in their political interest to find a way to come together. In the case of the president, the argument is he wants to have a successful last two years, so he’s going to find ways to work with Republicans. The argument on the flip side is that Republicans want to show that they can govern, especially since they face very tough electoral challenges in 2016. The electoral math favored Republicans in this go around in the Senate, but in 2016 it is going to favor Democrats quite decisively.

That’s the optimistic scenario. The pessimistic one?

Continued gridlock, obstructions, subpoenas, and bitter confirmation fights. In essence, the president and the Republican-controlled Congress simply can’t come to agreement. The argument pessimists make is that if the Republicans weren’t willing to strike deals after losing in 2008 and 2012, why would they be interested in striking deals now that they’ve won a big political victory? How all of this plays out, whether you get the optimist’s scenario or the pessimist’s scenario, is really going to depend upon the political calculations made by three groups: how does the president see his interest, how do Republicans—particularly Senate Republicans—see their interests, and how do Senate Democrats—who’d now be in the minority—see their interests? What Senate Democrats decide to do in this scenario will be interesting to follow because the rules of the Senate make it possible for the minority party to throw a lot of sand in the gears of government. So do Democrats stand together with the president? Or do some Democrats decide to work with the GOP? How that shakes out on particular issues will determine how debates on specific issues are likely to unfold.

How do problems like ISIS and Ebola and tensions with Russia affect President Obama’s ability to act?

It is far easier for Congress to constrain presidents on foreign policy than it is to compel them to act, and it’s important to keep that in mind. Unlike domestic policy, where presidents typically can’t act unless Congress consents, in foreign policy, presidents typically can act unless Congress forbids them from doing so. That’s partly because presidents have powers in foreign policy that they don’t have in domestic policy and partly because they can seize the initiative to set policy. But the president obviously would face a much more complex political environment in which to operate. How individual issues play out is going to depend upon how political divisions fall. Now, on some issues, the two parties would be split; on other issues, you’re going to see divisions within the parties.

There is considerable attention on the Middle East right now, with the focus on ISIS, but also tension with Israel over the inability of President Obama and Prime Minister Netanyahu to agree on how to proceed on peacemaking in the region.

The Middle East is going to be a challenge for President Obama, whether we’re talking about relations with Israel or with other allies or adversaries in the region. There’s a lot of turbulence and turmoil in the region, and a lot of difficult decisions for the administration to make. When we look at particular issues, the question to ask is what is the administration likely to do? Does that agree with what Congress would prefer the president to do, and is Congress unified on that point? An issue in which the president has the advantage is going to be the question of how deeply to go into Iraq and Syria in the fight against ISIS. When it comes to the question of sending combat troops into the Middle East, most Americans say they are opposed. It’s also an issue that divides the Republican caucus. There are obviously a number of leading Republicans, for instance Senator John McCain, who have been calling for a much more aggressive U.S. policy toward ISIS. But there are also Republican leaders who are concerned about getting embroiled even further in the Middle East. So it’s an issue in which you’re unlikely to see Congress compelling the president to do something.

"It is far easier for Congress to constrain presidents on foreign policy than it is to compel them to act, and it’s important to keep that in mind."

As for an issue where the president may be at a disadvantage, I would point to Iran. There’s a lot of talk that, perhaps by the November 24th deadline, the White House will strike a deal with Iran to halt its nuclear program. Here is a situation in which the president might need Congress’ support, depending upon the details of any bargain that is struck. That could be very hard to do. So if a deal is struck requiring the relaxation of sanctions and Congress is unwilling to rewrite law to allow those changes, the president might argue that he can act on his own constitutional authority. That would trigger a protracted political battle.

Another issue would be relations with Russia over Ukraine, and how much Obama wants to help Ukraine. The Ukrainian president has asked for a lot of military as well as economic assistance.

In terms of providing further aid to Ukraine, there’s not a lot of public opposition. It’s not an issue that creates divisions within either party, and indeed, you could probably find significant support on both sides of the aisle for doing more on Ukraine. So that would be a case where I would imagine it likely that the administration will do more, either because it decides the events on the ground warrant doing more or it feels political pressure to do more.

There’s a fair amount of consensus in Washington that sequestration [automatic defense spending cuts mandated by Congress] has been too crude and cut too deeply into the Department of Defense budget. So it may be possible given that consensus to rework rules of sequestration in a way that would work better for the military. The challenge there, of course, is that while Democrats look to be willing to make that change, they also want to see changes made in how sequestration operates on the domestic front. It’s not clear the Republicans are interested in doing that.

The other issue where you have the possibility of cooperation is trade. There’s been a lot of talk that a Republican-controlled Congress would be more inclined to give the president so-called Trade Promotion Authority (TPA), which essentially says that when the president brings a trade deal to Capitol Hill that Congress will vote up or down on a lot of it, rather than amending it or trying to redo the deal. [There are] two challenges there: one is that even if Congress gives the president TPA, he still has to go out and get a trade deal. The trade negotiation talked about most is the Trans-Pacific Partnership, which involves countries along the Pacific Rim. Those negotiations have been going on for quite some time and are currently stuck. It’s not at all clear, even if the president had TPA, that the major trading partners, particularly Japan, are now in a position to strike a deal. The moment of opportunity may have passed. The other issue with trade is that Republican leaders have made clear that if they’re going to pass a TPA resolution, the Democrats have to deliver votes on their side. That raises the question of whether Democratic representatives and senators will be willing to vote for Trade Promotion Authority. For that, you have to stay tuned.