Afghanistan may have to wait several potentially destabilizing months before President Hamid Karzai’s successor is elected, and even then, defeated candidates could attempt to overturn the results on claims of widespread fraud, says CFR’s Stephen Biddle. "Whether [the contenders] stay within the rules and address these things technically and politically, rather than violently, has always been one of the big question marks about the elections," he explains. Meanwhile, Biddle says that the United States would accept either of the two apparent frontrunners, Ashraf Ghani and Abdullah Abdullah, both of whom would likely sign a security agreement to keep residual U.S. troops in Afghanistan after the scheduled withdrawal in December. 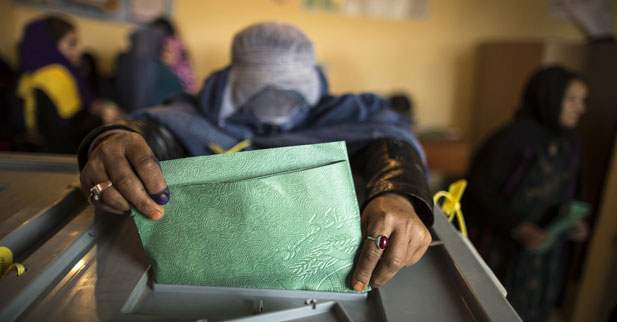 An Afghan woman casts her ballot at a polling station in Mazar-i-sharif. (Photo: Zohra Bensemra/Courtesy Reuters)

You’ve been in touch with U.S. military in Afghanistan. What is their opinion on the April 5th presidential elections?

Folks in the theater believe that the voting itself went about as well as you could reasonably expect, but there’s a lot of caution. When you look at the range of what might’ve happened, the outcome was at the optimistic end; the turnout was higher than I think most people had expected. Violence was a lot higher than an average day in Afghanistan, but a lot lower than it was in the 2009 elections and certainly much lower than what the Taliban had proclaimed as their ambition.

There’s a general assumption that there was significant fraud, but so far it looks like it was less than in 2009. Fairly limited samples of surveys suggest that Ashraf Ghani and Abdullah Abdullah are going to emerge as the top two vote-getters. And those are both pro-western technocrats whom the United States could work with.

Have you met these two?

Can you describe them briefly?

Abdullah Abdullah is an ophthalmologist, actually. His is of mixed Tajik-Pashtun heritage, but he tends to get framed as the non-Pashtun candidate because of his mixed background. And he’s from the north of the country, which reinforces that. He was the second place vote-getter in the 2009 elections and has widely been seen before and after as one of the major opposition figures vis-à-vis President Karzai.

Ashraf Ghani is kind of seen as one of the principal Pashtun alternatives to Abdullah Abdullah. He has a PhD from Columbia University in anthropology, taught at two American universities, was a World Bank official in Afghanistan, and has played a variety of different roles in the Afghan government.

Both Abdullah and Ghani have been ministers under Karzai, so they have governing experience. Ghani has particular background in development economics and was also a candidate in 2009, although his vote count in 2009 was very small. He’s been much more successful this time around.

And does it look like either will get an absolute majority?

There’s a general expectation that with eight candidates running, no one will cross the 50 percent mark and, therefore, there will be a runoff.

But the expectation is that one of these two will probably win?

There is some expectation that they will be the two top vote-getters, and the runoff will be between the two of them. An interesting twist is that Zalmai Rassoul does not appear to be one of the top two.

Zalmai Rassoul was the sitting foreign minister until he resigned in order to run. The general perception was that he was Karzai’s candidate—several of the other candidates who dropped out early tried to swing their votes to him in what was perceived as an attempt by Karzai to engineer a coalition on behalf of the person who would be seen as his legacy.

Part of what Rassoul was running on was an argument for continuity. But if the early indications hold up, that doesn’t appear to have won the day—either because people want to break from the Karzai era, or simply because Rassoul is such a lackluster campaigner, which he is.

Would it have been different if Karzai had agreed to this security pact with the United States?

What about Pakistan’s role?

In the aftermath of the U.S. raid in Abbottabad that killed Osama bin Laden, a lot of Americans came to the view that: No, Pakistan’s interests don’t overlap with ours at all. They see us as the enemy, and they really want us defeated. They don’t want stability in Afghanistan as we conceive it, and therefore [the United States] can’t get a tolerable outcome in Afghanistan unless Pakistan is simply beaten.

That view had been a small niche minority argument until Abbottabad. After Abbottabad, it gained a lot of steam. It is now a meaningful minority position, whereas before it was kind of marginalized.

So what are the next steps as far as the election?

It’s very unlikely that we’ll know [who wins] until the end of the summer, and there will have been enough fraud that resolving it will be a potential challenge.

Some have worried that the loser of this election won’t accept the result and will use fraud as a basis for trying to overturn the result and could turn their supporters into the streets. So the fraud issue is a potential destabilizer here.

My sense of attitudes in theater is that fraud was substantial but smaller than in 2009. But much depends on what the losers decide to do strategically. There’s going to be enough fraud that if somebody decides they’re not going to accept having lost, they will be able to use fraud as the basis of a challenge. And whether they stay within the rules and address these things technically and politically, rather than violently, has always been one of the big question marks about the elections.

So we have optimism today, but who knows for the future?

Even if we’re optimistic about the political transition, it is just one of a collection of necessary but insufficient conditions for an acceptable outcome—and it probably has never been the most important one.

The strategic fundamentals of the war are still basically the same. The war is a stalemate. The election has the potential to supplant the dilemmas of stalemate with chaos and instability. At the moment, there’s some reason to hope we can avoid that.