Beyond the street battles and revolutionary fervor, Egypt’s economy has stagnated, and all the indicators paint a "picture [that] is pretty bleak," says Farouk Soussa, chief economist for the Middle East at Citigroup. Egypt’s interim government lacks the mandate to make the structural reforms necessary to end unsustainable subsidies, Soussa says, and its only option is to borrow and spend its way back to stability. If the interim government is able to spur growth, Soussa says a portion of the capital that fled the country—which he estimates at $60 billion, far more than what is regularly reported in the press—could return and build on the potential state-funded recovery. 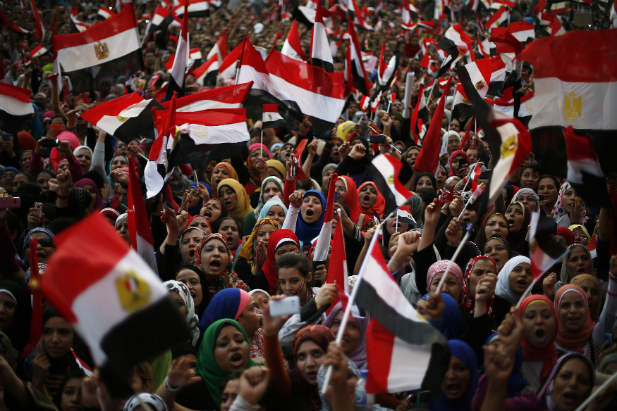 What’s your macro forecast for Egypt’s economy in 2013?

Growth is expected to be below 2 percent for the financial year, which in Egyptian terms is recession-type growth and is low compared to emerging markets. We’re expecting inflation to continue to creep upwards, breaking 10 percent by the end of the year. As for the budget deficit, we’ve got a number like 13 percent for the calendar year, but of course the latest budget figures that have come out imply something more like 15 percent. That’s the overall macro picture, but there’s a huge amount of uncertainty as this is a country that is extremely volatile.

When you look at these numbers, ignoring the political uncertainty, what does the data tell you about this economy?

The numbers paint a picture of an economy that is stagnating. And when you have a demographic like Egypt’s (PDF), which is very youth-heavy, you need to achieve growth of 6 percent in order to basically stand still on unemployment. Anything below 6 percent means higher unemployment, which also speaks to greater social frictions and decreasing standard of living. When inflation is above the growth rate, you’re looking at a contracting, eroding standard of living as well for the majority of people. The overall picture is pretty bleak.

More From Our Experts
Martin S. Indyk
Biden Can Clean Up Trump's Israeli-Palestinian Policy Mess, But Can He Broker Peace?

Are there any bright spots that you see?

In the near term, the only real upside that we can see is from stabilization in the social unrest and on the political front. It’s necessary for Egypt to then start stabilizing on the economic front; in order for the country to progress from the kind of downward economic trajectory, it needs to embark on more sustained structural reforms. But that’s a medium- to long-term issue.

"The numbers paint a picture of an economy that is stagnating."

What would happen in the near term if we get stabilization on the social and political front? First, you’d have a pickup in domestic investment.

If you look at the key drivers of growth in Egypt, consumption is holding pretty steady. Growth in the consumer and food industries is in the double digits and has been for the last two or three years. It’s really investment that has collapsed, because of the deterioration of security and political uncertainty. And the political uncertainty isn’t simply people out on the street fighting each other. It’s also policy uncertainty, such as when taxes were suggested and then rescinded under the previous [Morsi] government. This and other uncertainties made the Egyptian business elite very uncomfortable about investing in the current environment.

In addition to domestic investment, you’ve got foreign direct investment, which has also completely collapsed since the January Revolution [2011]. And then you also have other sources of foreign income, such as tourism and portfolio investment, which we expect to bounce back if there is stabilization in the political and social areas.

Egypt has spent much of its reserves over the past two years defending its currency. What’s your outlook on the pound?

We are projecting a steady rate of decline. But again, there’s a lot of uncertainty there. Clearly, if there are sustained inflows into the country, then it is conceivable that you could see the pound stabilizing and perhaps even strengthening over the coming year. On the other hand, if you don’t see that, and there’s a limit to how much the [Persian] Gulf can actually give Egypt, then the currency could be devalued more significantly.

I think the government will be looking to find help with restoring social and political stability by providing more products, more subsidies, and easing some of the constraints and hardships the Egyptian people have been facing over the last six months or so.

"One way [to restore stability] is to return to heavy-handed policing and I expect the kind of violence that we’ve seen against the pro-Morsi supporters is going to get worse."

Qatar’s $5 billion investment in Egypt, in the form of bonds, will likely go out the window at some point in the next eighteen months and won’t be rolled over. The Saudis, Emiratis, and Kuwaitis have given $12 billion, $9 billion of which is actually money, and the rest is oil grants, but it’s fungible. It’s not a net number because you’re actually going to take away from that the amount of money the Qataris have given before.

The $12 billion package from Saudi Arabia, Kuwait, and the United Arab Emirates seems to have stabilized the economy and currency. How much more will Egypt need over the six months or year to continue at this level?

In a static analysis, the reserve burden is about $1 billion a month, so they’ve just bought themselves a year before they’re back to the same situation that they were in in June.

But the situation isn’t static. The priority now for the government is to restore political and social stability, and they’re going to do that in two ways. One way is to return to heavy-handed policing, and I expect the kind of violence that we’ve seen against the pro-Morsi supporters is going to get worse. That’s the stick approach.

There’s also the carrot, in the form of pro-poor policies. Rationalization of subsidies is not an option: you can’t stop providing for the rich and give the poor more. The only way you can really do it is by providing more subsidies, food, gas, and electricity, and importantly, providing more jobs and trying to get projects up and running to create employment. Egypt has to go through a serious expansionary phase, which is going to have a negative impact on both the fiscal side—clearly because much of that is going to be coming through the government--and on reserves.

The upside, of course, is that if you do see any sort of stabilization, if this is successful in the political and social spheres, then at that point, you’d also start to expect some foreign direct investment, perhaps a slight increase in tourism, and portfolio inflows particularly in the equity market.

There is a significant amount of money out there. If you consider how much money left Egypt up until the period when Morsi took power, it’s a significant amount. Normally, people talk about reserves going from $36 billion to $14 billion. The reality is that reserves went from something close to $60 billion down to $14 billion. You also have to take away the money pumped in by the Qataris, Saudis, Turks, and Libyans, and you also have to subtract all the money they haven’t been paying the international oil companies. So actually, the amount of money that Egypt has hemorrhaged in the last three years is far more than what the press keeps talking about.

Talks with the IMF have been postponed by both sides. For a government that spends 20 percent of its budget on fuel subsidies, a quarter of its income on debt services, and another quarter on salaries, isn’t there a dire need for structural reform? Or will the interim government pass off these problems to its elected successors?

I don’t think the interim government has the political mandate to do structural reforms, and they recognize that. These guys are basically firefighters who have been dropped in to try and keep things going while Egypt enters a new phase in its transition.

I also don’t think it’s desirable that they should take these tough decisions. It could exacerbate the political and social stability, and any government that tries to implement these kinds of reforms needs to do so in an environment that has broad-based political support.

"The amount of money that Egypt has hemorrhaged in the last three years is far more than what the press keeps talking about.

Reforms wouldn’t make any difference for Egypt’s economic crisis in the near term. The economic crisis right now is really born out of political and social instability and lack of security. Tinkering with the subsidy system today isn’t going to make any difference. In the long term, they need to sort out their subsidies and rationalize government expenditures. Egypt, with an almost 50 percent gray economy, also has to improve revenue collection—from street vendors all the way up to steel magnates.

Is there any appetite from Gulf businesses to invest in Egyptian equities or businesses?

We’re seeing a lot of interest in the banking sector from Gulf countries, especially Qatar. There are very good opportunities for companies to expand into Egypt, but there are significant uncertainties starting with foreign exchange risks. The clients that we speak to are extremely wary of the FX risk, and there is also concern about the ability to repatriate profits.

If you look at a typical food and beverage company operating in Egypt, it’s growing in excess of 20 percent per year in Egyptian pounds. The market is doing extremely well. But the uncertainty is too high, and it’s very difficult to convince boards sitting in London or the United States that they need to invest more in Egypt.

So basically, everyone is waiting to see if the military rulers are able to bring back some stability to the streets and trigger some growth. And if they can’t do that, the uncertainty persists.

It’s a little bit boring because it’s obvious, but the reality of the situation is that nothing is actually going to be improved or changed on the economic front unless the political crisis is overcome.

America Needs Protection. So Does the Regime.

The U.S. military secured Joe Biden’s inauguration. But the new administration also needs to treat the armed forces as a potential threat.

Welcome to “Women Around the World: This Week,” a series that highlights noteworthy news related to women and U.S. foreign policy. This week’s post covers November 2 to November 9.

What to Watch for at the Biden-Putin Summit

U.S.-Russia bilateral relations have fallen to a new low, with Ukraine, Belarus, cyberattacks, and nuclear weapons among the biggest disagreements. What’s the best way to judge this summit’s success?

In Brief by Stephen Sestanovich June 8, 2021

The U.S. government is responding to another wave of migrants fleeing poverty, violence, and other challenges in the Central American region.

Illegal Fishing Is a Global Threat. Here’s How to Combat It.

Fishing provides a critical source of food and income for many countries, but much of it occurs unlawfully, harming vulnerable populations and eroding maritime governance.