Skip to main content
The Hard Road to Syrian Peace

The prospects for a peaceful, negotiated political transition coming out of a U.S.-Russia-backed international summit on Syria are pretty dim, says Frederic C. Hof, former special adviser for transition in Syria at the U.S. Department of State. But he says, "It’s worth the effort, because even if there’s only a 10 to 15 percent chance of success, the alternative is just really terrible." Hof notes that a particular problem for the Syrian opposition coalition is a lack of coherence, and recommends the creation of a rebel government on Syrian soil. As for the other side, he notes that Hezbollah and Iran have been "extraordinarily effective" as tactical forces, and says that "Assad has basically put his fate in their hands." 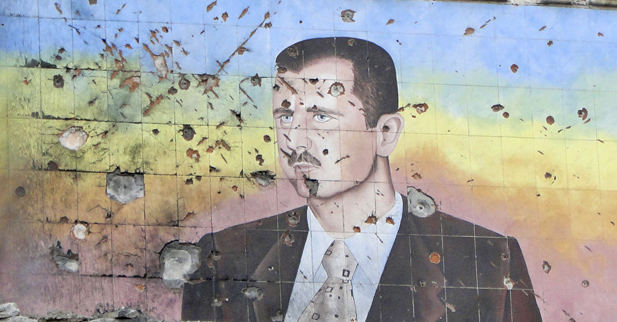 Mahmoud Hassano/Courtesy Reuters
More From Our Experts
Catherine Powell
Data is the New Gold, But May Threaten Democracy and Dignity
Elliott Abrams
When Democracies Vote Wrong

The UN-sponsored Geneva conference last June produced a document (PDF) calling for a resolution to the Syrian problem, which never accomplished anything. And now, Secretary of State John Kerry has worked out another arrangement with the Russians to have another international conference to try and end the bloodshed in Syria. What are the chances for success?

The likelihood of an ultimate success--meaning a negotiated, peaceful, managed, and complete transition--is pretty low. First of all, it’s going to be very difficult to get both parties to engage in a good faith negotiation. And second, given the extent to which Syria has already plunged in the direction of state failure and widespread sectarian violence, it would be equally hard to sustain any agreement that might be reached. But it’s worth the effort, because even if there’s only a 10 to 15 percent chance of success, the alternative is just really terrible.

There are so many opponents of the Assad regime. Who are the primary players?

What the U.S. government and many other analysts would consider as the mainstream opposition are people who basically fit in the category of being Syrian nationalists. This is a body of primarily exiles called the National Coalition for Syrian Revolutionary and Opposition Forces, or loosely called the Syrian Opposition Coalition. You have a Supreme Military Council, which is an independent body, trying to rope together the various elements of the so-called Free Syrian Army. And you have the Free Syrian Army, which is basically a collection of local militias and home defense units, not yet united into a single chain of command. And then you have a network of various local committees--coordinating committees, revolutionary committees, mainly in various urban areas--forming the nucleus for what could, in the future, be pretty solid local governance in Syria.

The essential problem right now is that none of this has been glued together; the only way you can do that is through the establishment of a government on Syrian territory. Without that governing body, the chances of getting an opposition that looks reasonably coherent is very small.

What about the al-Nusra Front, who seem to do be doing much of the fighting and are labeled terrorists by the United States?

Yes, they’re doing a lot of the fighting and getting a lot of publicity. They’re very good at information operations. These jihadist groups are essentially a reaction to the sectarian war that the Assad regime has waged since the beginning. The regime has used armed units--from the military, from the intelligence services, even armed gangs--that are drawn primarily from one sect in Syria: the Alawites.

Of course, this is the minority group that Assad and his family are from, and they’ve been employed against an opposition that is primarily Sunni Muslim. This is what has attracted a lot of these [jihadist] groups from Iraq and elsewhere. And this is what the regime wants--because as long as he is able to portray the opposition as being jihadist or al-Qaeda, Bashar al-Assad will think and dream about ultimately being able to remarket himself to the West as a barrier against these groups. This is why it’s important for the United States and others to support the mainstream Syrian nationalist opposition.

Has anything happened since Secretary Kerry met with the Russian leadership on Syria last week?

Key elements of the State Department have been in Istanbul and, I believe, in Cairo speaking with the opposition coalition, which is headquartered in Cairo these days. They will need to be persuaded to take the lead in trying to form a negotiating team that, number one, is legitimate in the eyes of the mainstream opposition, and, number two, actually puts together a strategy for eventual negotiations.

This is a heavy lift for the American side because there is not much of an appetite for negotiations across the spectrum of the Syrian opposition. Their view is that Assad should resign and leave the country before negotiations even begin. Indeed, this is the position they took in the immediate wake of the Geneva agreement last year, which went nowhere.

And it’s up to the Russians to deliver Assad to this conference?

Yes. It was clear right after the Geneva meeting broke up last year that both sides had an enormous homework assignment. The United States was going to have to work with key allies and the Syrian opposition to try to a) persuade them to play in accordance with the outline of the Geneva procedures, and to b) form a coherent, effective, and representative negotiating team.

The Russian challenge was perhaps even more difficult because they were basically going to have to deliver the regime to a process which, if it ran the course as indicated by the Geneva agreement, would resolve in the creation of a transitional governing body and a new government. That government would be formed on the basis of mutual consent between the opposition and the government negotiating teams. And with mutual consent being mandatory, it would mean that there was no way the opposition was going to agree to the continuation of Bashar al-Assad or any of his top henchmen in office.

And neither side was able to do anything?

Yes. It was really preempted by events. Assad made it very clear both to Kofi Annan, who at the time was the UN-Arab League special envoy, and to the Russians that he basically already had a national unity government. [From his viewpoint,] there was no need for negotiations, and he was not going to take any of the de-escalatory steps that Kofi Annan thought was necessary.

My recollection is that we really didn’t get too deeply into discussions with the opposition because all of this was overcome by Assad’s reaction, and by the fact that there was a big fight in July in the Security Council over a Chapter VII resolution that would have aimed to compel the Syrian government to cooperate--this was the third of three resolutions that the Russians and Chinese vetoed. So the consensus [of the five permanent members of the UN Security Council] that came out of Geneva really didn’t last very long.

In the last few days, there was a car bomb explosion in Turkey near the border with Syria. Prime Minister Erdoğan is very upset and has blamed the Syrians. Now he is coming to Washington this week. What is he going to want?

He’s coming here at the invitation of the president. What the president is looking for is a real Turkish commitment to work through this organization called the Supreme Military Council, which is led by a Syrian exiled defector, Major General Salim Idris, operating out of Turkey. This is the organization trying to impose some command and control over the disparate elements of the Free Syrian Army.

The idea--and this is basically part of the [Obama] administration’s revised strategy--is to try to make General Idris the channel, the funnel, the authoritative address for the needs of the free Syrian army--whether it is weaponry, which the United States is still not in the business of providing, or nonlethal assistance, which is really important in terms of food, communications, body armor, medical, and the like.

The one piece of real leverage that Idris--who by all accounts is a very capable, competent, and honest officer--can use to try to bring order to this chaos and begin to marginalize some of these jihadist elements is his role as the sole address [for U.S. support]. This is what the president is going to be looking for. Frankly, I don’t know if Prime Minister Erdoğan has some specific tasks here, but the president is really going to reiterate what Secretary Kerry has said in his visits to Turkey: that we really need to centralize our assistance to the Syrian army.

Does Idris have a real force?

No. He’s got a staff, and he’s got a headquarters. The way this conflict has evolved is very local in character. You have various armed organizations in different neighborhoods, different cities, different towns, operating under the label of "Free Syrian army" to distinguish themselves from the regime and from others, like the jihadists.

One of the [rebels’] secrets of survival has been the fact that there’s been no one headquarters, no single node to knock out. But now it’s clear that both some tactical and some political direction is needed.

Up until this point, one of the [rebels’] secrets of survival has been the fact that there’s been no one headquarters, no single node to knock out. But now it’s clear that both some tactical and some political direction is needed. It’s also clear that the Syrian nationalists, among the armed opposition, need a leg up over the armed jihadists. Idris presents an opportunity to the United States, Turkey, Qatar, Saudi Arabia, and others to bring order to this situation.

How effective are the Iranians and Hezbollah in helping Assad?

In recent days and weeks, the Assad regime has succeeded in stabilizing the tactical situation in some areas, and even recapturing some small areas. According to reports, this is because of Iranian and Hezbollah fighters in the tactical lead, actually conducting assaults successfully and then turning the area over to the Syrian army. They’ve been extraordinarily effective, and Assad has basically put his fate in their hands.