Skip to main content
Has Saudi Arabia Soured on Washington?

Saudi Arabia is apprehensive about improving relations between the United States and Iran, its regional adversary, but ironically these fears will push the kingdom closer to its irreplaceable ally in Washington, says F. Gregory Gause, nonresident fellow at the Brookings Doha Center. "They really don’t have an alternative patron," he says. The Saudis were particularly irritated with the Obama administration’s decision not to strike Syria, where Gulf Arab states and Turkey are pushing hard to unseat the Assad regime. Gause says that the chief impetus for Saudi support of the Syrian insurgency is unwinding Iranian influence in the region. "I think that for the top levels of the Saudi decision-making structure, the sectarian issue is not nearly as central as the pure balance of power logic," he says. 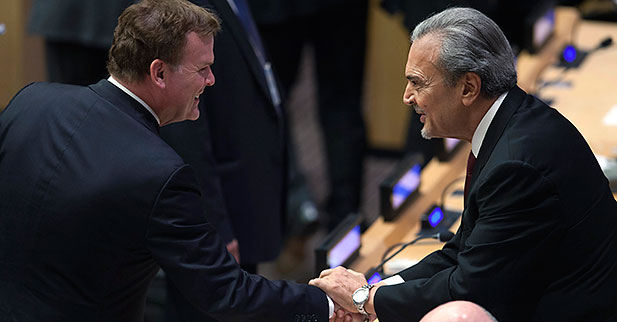 What motivated Saudi Arabia to decide against giving a speech to the UN General Assembly for the first time in history?

Fewer speeches to the General Assembly are generally good thing. So this is a trend that should be encouraged. Specifically, I think the Saudis are trying to signal to the United States that they’re quite displeased with the way U.S. policy is going in the Middle East. Having said that, I don’t want to exaggerate the effects of this displeasure.

So the Saudis did not appreciate the apparent rapprochement between Presidents Hassan Rouhani and Obama at the UN, capped off by the famous fifteen-minute phone call?

That was the most recent thing, but we can take this back a couple of steps. The Saudis were, of course, extremely supportive of the military coup in Egypt, which the United States has sent mixed signals about. I don’t want to say that Washington is dead-set against the military coup…

But the White House has indicated its displeasure with Egypt’s interim leadership, holding up delivery of U.S. military aid.

Right, the Saudis don’t like that, and very much didn’t like the backing away from the military threat against Syria. I think that was the primary cause of their disquiet with the United States in the last couple of weeks. They think they went out on a limb by publicly supporting a U.S. strike when it was talked about by President Obama, and then the United States pulled the rug out from under them by not carrying through.

And they didn’t like the idea of the United States joining the Russians in this diplomatic agreement to knock out Syria’s chemical weapons?

It was not so much that they’re opposed to getting rid of Syrian chemical weapons, but that they were opposed to missing an opportunity for what they saw might be a U.S. military strike against President Bashar al-Assad.

How has Saudi involvement in Syria evolved?

Well it’s interesting. To walk this back to the beginning of the uprising: in 2011, as part of the general Arab revolt, the Saudis were very cautious about getting involved. In general, they don’t like uprisings. But about six months in, as the sectarian character of the Syrian civil war became hardened, the Saudis saw an opportunity to roll back Iranian influence.

It really was the Qataris and the Turks who took the lead in supporting the rebels from up north, from Turkey. The Saudis didn’t really get in the game until later. They were kind of junior partners, but as they felt that the Turkish-Qatari support was basically going to Muslim Brotherhood types—the Saudis have real qualms about the Brothers—the Saudis, in a surprising move, became primary backers of the Free Syrian Army, the more secular forces.

The fighters that the United States supports.

Exactly. And this is a result of both the Saudis’ disquiet about the Muslim Brotherhood, which was in power in Egypt, and also their disquiet about Salafi jihadists. The Saudis had supported the Salafi jihadist movement in Afghanistan against the Soviets, and indirectly in the 1990s in Bosnia and other places, and of course it came back to bite them on September 11, 2001, and with al-Qaeda in the Arabian Peninsula. So the Saudis are leery about what many people think of as their traditional allies, the more Wahhabi Salafi types.

So in an interesting switch, the Saudis were backing the more secular forces in Syria. Now, in recent weeks, it appears that the Saudis might have switched again. They established a southern front resupplying groups through Jordan; and just in the last couple of weeks a number of Islamist groups within Syria have formed a coalition called the Islamic Army. These are Islamist groups of various stripes that don’t include the al-Qaeda types; they don’t include Jabhat al-Nusra or the Islamic State in Iraq and Syria. And there’s some reporting, which looks credible to me, that the Saudis were the ones who were behind trying to get these other Islamist groups together. That could be an indication that the Saudis have given up on the Free Syrian Army.

And the Saudis’ goal is to still overthrow Assad?

Yes, they’re publicly on record about that. One of the reasons that they were critical of the chemical weapons deal is that it said nothing about getting rid of the Assad regime.

And why are the Saudis so interested in getting rid of Assad? After all, he was an ally of theirs for years.

The Saudis remember very fondly the days of Bashar al-Assad’s father, Hafez, where, even though they had their disagreements with him, they did a lot of business with him, too. Since Bashar has come in, it’s been much more up and down.

The main driver for the Saudis in this is rolling back Iranian influence. Most people see this in a sectarian light: the Saudis are Sunni, the Iranians are Shia, Bashar al-Assad is a Shia. But I think that for the top levels of the Saudi decision-making structure, the sectarian issue is not nearly as central as the pure balance of power logic.

However, the sectarian issue is tied up in this as well because that’s the way politics are shaking out in Syria: the Saudis have a natural affinity with the Sunnis; the Iranians obviously have a natural affinity with Shiite groups in Lebanon and Iraq. So what you’re getting here is a melding together of sectarianism on the ground and balance-of-power politics at the regional level.

Is the United States so preoccupied with domestic politics right now that it is disengaged from the Middle East?

I wouldn’t go that far. What’s clear to me is that the Obama administration doesn’t want to get involved in the Syrian civil war, but not willing to say it. They’ve gotten themselves backed into involvement in Syria in various ways, but the real desideratum for the White House is not getting militarily involved.

I don’t think that means that they’re not interested in the broader Middle East. They’re very interested in picking up the feelers from Iran and that, of course, brings up another issue with the Saudis.

The Saudis—and the Gulf states in general—worry that a U.S. rapprochement with Iran will be at their expense.

But if the United States succeeds in removing the Iranian nuclear weapons threat, wouldn’t they support that?

Absolutely. But what the Gulf states worry about is that the cost of a nuclear deal with Iran will be some kind of U.S. blessing to Iranian regional dominance. This is vastly exaggerated, in that I just don’t see the United States "turning over" the Gulf to Iran. U.S. policy in the Gulf for decades has been aimed at preventing any other power from getting a dominant position in the oil patch—that’s why we fought the Gulf War in 1990–91; that’s why we have all those military facilities in the Gulf states. So I just can’t see us being snookered by Tehran into giving approval for an Iranian protectorate over the Gulf.

Are there any historical comparisons you could make?