Skip to main content
Is Iraq Headed for Civil War?

Many Iraqis view recent advances by radical jihadi forces in the north as a prologue to a wider sectarian conflict between Sunnis and Shiites, says veteran journalist Jane Arraf, who has covered the country since before the 2003 U.S. invasion. "Civil war is what extremist groups have always tried to foster," she explains. Prime Minister Nouri al-Maliki has only contributed to the tensions, she says, by so far resisting entreaties to enlist more moderate politicians in his government. She says that many Iraqi leaders want the Obama administration to "exert the remaining leverage it has to persuade Maliki and, in particular, Sunni leaders to negotiate a way to keep the country together." 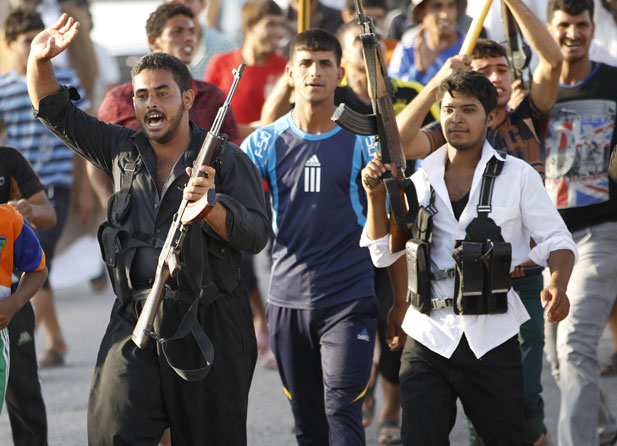 Volunteers who have joined the Iraqi army to fight against the Islamic State of Iraq and the Levant (ISIL), carry weapons during a parade in the streets in Al-Fdhiliya district, eastern Baghdad, June 15, 2014. (Photo: Thaier Al-Sudani/Courtesy Reuters)

What is the mood in Baghdad right now? Is there a feeling of doom that the marauding ISIS [Islamic State of Iraq and Syria] forces to the north will soon attack the capital, or is there confidence that Shiite strength will prevail and keep them away?

Right now, I’m in the vicinity of Kirkuk, which is occupied by Kurdish Peshmerga forces, but I have had lengthy phone conversations with people in Baghdad. Certainly the mood there is one of apprehension. It reminds me a bit of the atmosphere before the war in 2003, when people were braced for disaster—knowing there would be an attack but not knowing exactly how or when. Of course, the [partial] U.S. embassy evacuation adds to that. If embassies are taking people out of the Green Zone, which is basically a fortress, it doesn’t say much for the safety of the rest of the city.

I’ve been going out to the Nineveh plains and the string of towns and villages there about 10 to 15 miles from Mosul, and things there are quite tense. It’s in Nineveh (Mosul) province but in Kurdish-controlled territory. Kurdish Peshmerga security forces have stepped in to fill the gaps left when the Iraqi army and police withdrew, and it has the feel of the frontline of a battle. One school we drove by yesterday was occupied by Peshmerga—you could see the desks piled on top of each other in the classrooms and their soldiers on the roof. At another town, all the entrances were sealed off, and Kurdish security forces were protecting the churches.

Prime Minister Nouri al-Maliki went to Samarra, the Shiite holy city, and prayed, and the leading Shiite cleric, Ayatollah Ali al-Sistani, called on able-bodied Shiites to join the defense against ISIS. Did this bolster confidence that the fighting would avoid Baghdad for the moment?

On the contrary, it adds to the fear that this could escalate into civil war. And civil war is what extremist groups have always tried to foster. Some political leaders and a lot of Iraqis believe that what we’ve seen in the past few days is just the beginning of the slide. A religious call to fight also entrenches the sectarian [Shiite] nature of Iraq’s supposed national security forces, which has been one of the catalysts of the Sunni uprising.

Politically, is there any chance that the Iraqi parliament will not reelect Maliki as prime minister in the aftermath of the April election? In other words, is he not held responsible for the disaster that has happened in Mosul and places up north?

The crisis definitely complicates an already extraordinarily complicated political dynamic. Maliki is trying to bring together enough political partners to form a majority in parliament that would give him a third term as prime minister. He is now in the position of having to rely on the Kurds, who have opposed a third term for him, to maintain security in Kirkuk and other disputed areas between central government and Kurdish control. It also weakens his hand among Shiite parties that have wanted to replace him. His surprise that the army of which he is commander-in-chief "evaporated" doesn’t speak well of his control of the situation, nor do his statements on the weekend that Mosul hasn’t been lost.

In private he realizes the enormity of the crisis, but he doesn’t instill confidence in the general public. In Nineveh province, a few days ago, I was sitting with Iraqi Arabs when the Iraqi television news came on. "Lies from Baghdad," one of them said.

We have to realize, too, how we’ve arrived at the present. For the last four years, Iraq has had no defense or interior minister because political parties haven’t been able to agree on a candidate. The culture minister has been the acting defense minister. With Fallujah at war, the weekly cabinet meeting a few weeks ago noted that he had approved a cultural cooperation agreement with Slovakia. Parliament has not been able to summon senior defense officials or Prime Minister Maliki to answer questions about security. And, equally as important, the response to Sunni unrest over the past two years has been a counterproductive military reaction rather than real negotiation.

How are relations with the United States? What would Maliki want from the United States right now? Does he now regret not extending U.S. military presence in Iraq past December 2011? Does he want Iranian troops on the ground in Iraq?

Maliki is quite desperate for U.S. military help. When fighting started in Fallujah earlier this year, Iraq asked for drone strikes, and it has renewed that request. They also want more and faster delivery of F-16s, more Hellfire missiles, more intelligence help for targeting. The United States seems prepared to give them all of that.

On the political front, a lot of Iraqi leaders want the U.S. to exert the remaining leverage it has to persuade Maliki and, in particular, Sunni leaders to negotiate a way to keep the country together. I don’t think there is any way [Maliki] could have signed the extension of U.S. troops three years ago, although he wasn’t opposed to a small number of troops remaining. You’ll recall the agreement broke down ultimately on the issue of whether U.S. forces would have immunity from Iraqi courts. In the wake of the killings of Iraqi civilians by Blackwater security personnel, that was never going to get through parliament.

Maliki doesn’t want Iranian troops on the ground, although he will welcome some pinpointed Iranian intelligence and security help. The secondary battle here is to retain Iraq’s sovereignty in the midst of all these regional and internal pressures pulling it apart.

Do the Kurds feel this is an opportunity for them?

On the surface, this is a huge opportunity for the Kurds: They’re now responsible for security in all of the disputed city of Kirkuk and have stepped in across the Nineveh plains between Mosul and the Kurdish territories where federal security forces abandoned their posts. They’ve proved what they’ve been saying for years—that they are the only reliable security partner in Iraq. At the same time, it’s also a hugely dangerous situation for them, having ISIS on their doorstep, and they acknowledge that they have to be very careful going forward.

On the political front, it gives them enormous leverage. Earlier this year, Maliki cut off oil revenue to the Kurdish region in retaliation for the Kurds exporting oil directly to Turkey. I expect being dependent on them for security will change that equation. The governor of Nineveh province, who fled Mosul along with half a million residents, is essentially in exile in the Kurdish capital, Erbil. He is relocating his office to Tel Keef, within Nineveh province but under Kurdish control, and says he is negotiating a security and economic pact with the Kurds.

How much do we know about what’s happening in Mosul?

It’s a very strange dynamic. We’ve seen the horrific videos of killings of Iraqi security forces. Inside the city it appears to be a different story. When Mosul first fell, the assumption was that ISIS, leading the fight, would be the same type of consistently brutal organization we’ve seen in Syria. But they’ve gone to great lengths to reassure people that their target was the Iraqi government, not the people. Some of those who fled Mosul have gone back, and others say they’re remaining outside because their biggest fear is Iraqi airstrikes on the city.

Those in charge are a combination of ISIS, former Ba’athists, and tribal fighters, many from Anbar. Those who took the city appeared to be Syrian-trained and included a substantial number of foreign fighters. The people they left behind are more local. One of the priests I spoke with says that when he went back to check on his church last week, the fighters welcomed him back and said to one of the nuns, "Please pray for our victory." There is more electricity and more water than residents normally have, the concrete blast barriers have been removed and the streets cleaned. The deposed governor says they have used the money looted from the banks to pay city workers.

However, if you look at the city bylaws, which are essentially their manifesto, they are more revealing. They say that all Iraqi government property is now part of the Islamic State and belongs to the people. It also bans public gatherings and recommends that women stay in their homes unless they absolutely need to go out. So there is quite a lot of tension between ISIS and its temporary partners. The leaders of the uprising in Anbar province have always been quite clear that they are in a temporary alliance with al-Qaeda and some of its offshoots, but have also been clear that at some point they expect to have to fight ISIS again as well. That might be coming sooner rather than later.