North Korea claims to have successfully tested a hydrogen bomb with its fourth nuclear test in early January. Regardless of whether Pyongyang’s claims are valid, global powers must step up efforts to halt its advancing nuclear capabilities, says CFR Stanton Nuclear Security Fellow Amy J. Nelson in a written interview. “If recognition of its might and significance is what North Korea craves, the international community might do well to give it—or at least a taste of it,” writes Nelson. The North Korean regime’s undemocratic practices and human rights violations are clear reasons to condemn its leaders, but Nelson says “there is every reason to pursue diplomatic means to curb their nuclear program.” 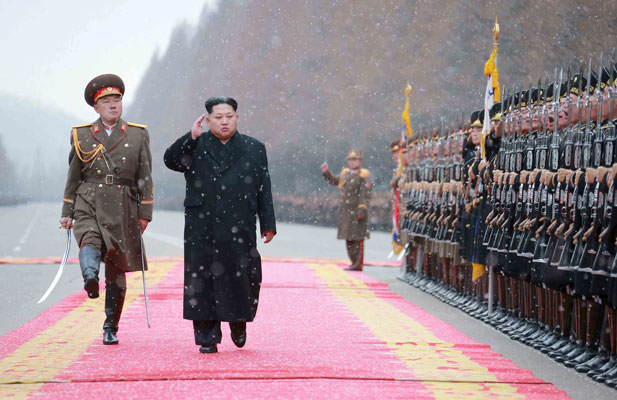 What does this latest nuclear test tell us about North Korea’s nuclear weapons capabilities?

It tells us more about North Korea’s fervent desire for a nuclear weapon than it does about its actual arsenal or technical capabilities. Historically, North Korea’s claims about its weapons program have been unsubstantiated. We do, however, have estimates of how much plutonium North Korea has for making an atomic bomb, and that quantity would appear to be sufficient for at least six to seven weapons, possibly more.

It is unlikely that the bomb tested last week was a thermonuclear (hydrogen) bomb, though right now it’s impossible to rule out entirely. That may take weeks, if it can be done at all. Thus far, seismic data aggregated by the Comprehensive Test Ban Treaty Organization (CTBTO) confirm that the earth movement detected had human origins. The most recent analysis of these data confirm the view that the device tested was likely a fission device (atomic bomb), rather than a hydrogen bomb.

In the end, it may prove impossible to determine whether the device was thermonuclear. This means that the international community should be prepared to respond to North Korea absent this confirmation. It also could mean that, if North Korea really wants the world to believe it successfully tested a thermonuclear device to establish its legitimacy as a nuclear power, it might consider allowing an inspection team to take samples from close range.

“If North Korea really wants the world to believe it successfully tested a thermonuclear device to establish its legitimacy as a nuclear power, it might consider allowing an inspection team to take samples from close range.”

Moreover, with every nuclear and missile test, North Korea learns more about how to improve its nuclear weapons program. There is an inevitable aspect to these kinds of research and development programs when they are left unchecked, which is to say that it’s also only a matter of time before North Korea achieves fully functional nuclear weapons. Waiting to see whether North Korea does indeed achieve these technologies is in no one’s best interest—we know that it’s possible to achieve them when a country is determined to do so, even when measures can be taken to slow the process.

What are the proliferation risks with this type of weapons program?

India, for one, insists that Pakistan’s missiles are a copy of North Korea’s, and therefore considers North Korea’s tests and miniaturization accomplishments ultimately as threats to India. In short, if North Korea has an H-bomb, so will Pakistan in due time. So, the question becomes: When will Pakistan get the technology, and how will India react to or preempt this?

The threat of proliferation can, of course, also lead to escalation—not just for India, but for South Korea, as well. Since last week’s test, South Korea has requested that U.S. strategic (nuclear) weapons be redeployed to U.S. military bases in South Korea. Following North Korea’s 2013 test, South Korea actually debated pursuing its own nuclear weapons to deter its adversary.

More abstractly, an ongoing concern with North Korea is the potential failure of nuclear deterrence theory. Generally, nuclear weapons states (NWSs) abide by the logic that nuclear weapons exist in their arsenals to deter other nuclear states, not for actual use. How do you deter an adversary that may abide by an alternative logic not steeped in a preference for avoiding self-destruction?

Is this test a sign that U.S. and international sanctions are failing to stem North Korea’s atomic weapons and ballistic missile programs?

Why have traditional kinds of arms control efforts not curbed proliferation in the case of North Korea?

Diplomatic success requires certain preconditions that aren’t always possible. When states come to the negotiation table to reduce the size of their arsenals, it’s generally because doing so is in the security interest of all parties involved. It’s a different dynamic when six nuclear-capable countries or allies are working to stem the capabilities of a single state. It was the same for Iran—that kind of asymmetry introduces obstacles to the negotiation process that we don’t typically see in more traditional—and successful—arms control endeavors. It accounts for why, in part, the Iran deal took so long to achieve and why compromise was necessary to keep Iran at the table.

“With every nuclear and missile test, North Korea learns more about how to improve its nuclear weapons program.”

The North Korean case also shows signs of one of the worst possible attributes of any potential arms control negotiation: that a negotiating party is coming to the table with insincere intentions, to either buy time while they develop their program (for North Korea), or in other cases to obtain more information about the weapons programs of other parties to the talks.

What actions can international bodies and major powers do to further limit development of North Korea’s nuclear weapons program? In particular, how influential can China be in quashing such a program?

If recognition of its might and significance is what North Korea craves, the international community might do well to give it—or at least a taste of it by opening diplomatic channels. It’s worth the cost of sitting down with the North to begin discussions about its program. While there are certainly reasons to abhor the regime for its undemocratic processes, self-serving convictions, and flagrant violations of human rights, there is every reason to pursue diplomatic means to curb its nuclear program. We should return to the Six-Party Talks.  The recent experience of multilateral negotiations with Iran shows that diplomacy could be an effective means of curbing North Korea’s program.  Certainly, there are no guarantees, and insincerity could derail or prolong negotiations, but diplomacy is the best option right now.  Any kind of military response risks escalation.

The UN has also vowed “further significant measures,” and all eyes are on China to see to what extent the Chinese will implement existing or additional sanctions.

The United States can help, in part, by strengthening existing regimes, specifically, by ratifying the Comprehensive Test Ban Treaty. The CTBTO clearly provides a valuable service to the international community in support of the taboo against testing (and using) nuclear weapons. Their detection system has proven its worth: it’s worked each time North Korea has tested nuclear devices.

Why would North Korea claim to have successfully tested a hydrogen bomb if, as many experts suggest, the device was most likely something far less powerful?

There are so many unknowns in this area, and the lack of available information is exacerbated by the relative opacity of the regime. It’s certainly possible North Korea aspires to have a hydrogen bomb to secure its legitimacy and establish itself as a powerful force in the international system. Many have called this announcement, bluff though it may be, intentionally “provocative.” There are other possibilities that appear far-fetched from the outside but not impossible given the regime: what if those underneath Kim were given the order to develop and test an H-bomb and had to deliver on that promise—or at least make it appear as if they could? In totalitarian regimes, there are oftentimes no acceptable alternatives.

The potential upside of all of this is that have we haven’t had this much discussion over or coverage of the technical details of nuclear weapons in recent memory. The public discourse that’s happening now—detailing the difference between an atomic bomb and a hydrogen one—serves to highlight the devastatingly destructive capability of all nuclear weapons, particularly thermonuclear bombs, which are deployed throughout the word. It also underscores the fact that, while the Non-Proliferation Treaty codifies which states can and cannot have nuclear weapons, the truth is that no state can truly “own” lethal weapons technology. Eventually, all of these technologies spread or are achieved elsewhere. Innovation thrives where diplomacy fails.