President Barack Obama’s State of the Union address tomorrow is likely to focus on domestic economic problems rather than on foreign affairs, says Richard N. Haass, the president of CFR. He says this reflects that "the world of foreign policy and national security is relatively calm" in contrast to the economy. He believes that "Iran will prove to be the most compelling foreign policy issue of 2010." Haass recently wrote an article advocating that the United States try to foster peaceful regime change in Iran in the wake of the apparently rigged elections last June.

President Obama has indicated that he’s going to stress "fighting for the middle class" in his State of the Union address. In fact, he hasn’t really talked about foreign affairs lately, and it is uncertain how much attention it will get in the speech. Has foreign affairs dropped to the bottom of his priority list?

More From Our Experts
James M. Lindsay
Transition 2021: What Can Biden Get Done?

There are two reasons that the speech is virtually certain to focus on the domestic economy. The first is the actual state of the domestic economy and the politics that surround it. Obviously that’s the subject that’s most on the minds of the American people. But secondly, it also reflects the fact that by contrast, the world of foreign policy and national security is relatively calm. Even though American forces are in large numbers in Afghanistan and Iraq, mercifully, U.S. casualties are low. The attempted terrorist attack in the airliner over Detroit on Christmas Day did not succeed, which made it a several-day story but not a lingering one. Even the attention to Haiti is beginning to fade because what grabbed peoples’ attention was the human emergency, but the long-term challenge of developing Haiti is not going to be a front page story. So again, the reason for the domestic economic focus is a recognition that foreign policy and national security have receded from the forefront of the American political conscience. And there is an awareness that economic issues remain paramount.

Recent polls show that the only foreign issue the public is very interested in is protecting the country against terrorists.

Which in some ways is as much a domestic issue; it’s an extension of homeland security and again, it ought not to be surprising. Foreign policy begins at home. People think about economic issues in terms of "What does some policy mean for jobs?" So one of the reasons, for example, that trade is not getting the emphasis that I would like it to is because of domestic politics, and the fact that in a high unemployment situation, many Americans are worried more about imports than in seeing the opportunity in increasing exports.

Obama took office with a very full foreign policy agenda. On his second day in office, he announced that former senator George J. Mitchell would be his Middle East negotiator. He had an early study done on Afghanistan. What’s happened to these issues? On Afghanistan, we know he announced in early December that he would send thirty thousand more troops and try to withdraw them by July 2011.

Which, in the end, may not be the most important part of the decision. The reorientation of policy: the reaching out to the Taliban, attempts to build relationships with tribal leaders, attempts to improve Afghan governance may be at least as important as the troop increase in Afghanistan. But you’re right: Afghanistan was the most consequential national security decision by Mr. Obama’s first term. But again, in the short run, his decision has taken it off the immediate front burner. 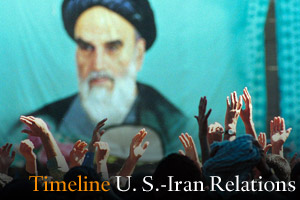 If he had not sent the thirty thousand troops, it would have been a big political issue.

More From Our Experts
James M. Lindsay
Transition 2021: What Can Biden Get Done?

Or maybe not, if things were relatively calm. Iraq is off peoples’ radar screens, because again, U.S. casualties have reached a seven- or eight-year low. The Iraqi elections in March will be a few days’ story, but Iraq won’t resurface as a major issue unless things were to get quite bad again. As for the Middle East negotiations, trying to get the Palestinian-Israeli talks underway again, the administration launched what I believe was an ill-designed initiative that has come and gone.

I believe that for the first time in the thirty years since the Iranian revolution, we have the emergence of a serious political opposition in that country that has significant and growing domestic support.

That became a clear failure so far.

It was a misguided approach. On the other hand, Americans have discounted the reality of an Israeli-Palestinian impasse. So it’s not an issue that most Americans wake up every day focused on. Many of the most important issues in the world--say China’s trajectory, or Russia’s, or India’s--again are part of the architecture, but they don’t get much in the way of day-to-day notice.

Let me say one or two other things. One issue that has clearly receded in attention in this country is climate change. It’s the result of the poor economy; also the failure at Copenhagen, continuing debate over science, and new important debates over this or that policy prescription. That’s an issue that clearly has less traction domestically in early 2010 than it had in 2009.

Obama has given considerable thought to nuclear weapons reductions. He gave a big speech on this in Prague, and we’re negotiating with Russia on a new Strategic Arms Reduction Treaty (START) treaty, which Russian President Dmitry Medvedev said the other day was close to agreement.

All indications are we will get an agreement sooner rather than later, and it’s good that you mention the nuclear issues because that cluster of issues is going to get more attention over the next six months than perhaps it has in any time over the last six or sixteen years.

We’ve got these big conferences coming up.

We’ve got two big conferences. You’ve got the Nonproliferation Treaty review conference in New York in May, and before that, in March, you have this Global Nuclear Security Conference, which Obama is hosting. So this combination of the Russian negotiations, as well as these two big international conferences, will remind people that this set of issues, which many think of as having disappeared along with the end of the Cold War, is still very much with us.

One of the major issues out there is still Iran, where Obama started out the year seeking to engage the Iranians in negotiations. Then we had these apparently rigged presidential elections in June. You earlier had supported the idea of negotiations. But you yourself wrote an article saying the United States should put more emphasis on changing the Iranian regime from within. What led you to change?

[G]iven that the negotiations are going nowhere, given that the Iranians continue to churn out enriched uranium at whatever rate they can in their labs, and given this political dynamic within Iran, the United States ought to find ways to support this Iranian dynamic.

Let me say first if I were forced to predict, I would predict that Iran will prove to be the most compelling foreign policy issue of 2010. What led me to the view that the United States needed to reorient its policy away from a "nuclear first" or a "nuclear only" policy was several things. On the nuclear side, there was absolutely no evidence that the Iranians were either sincere about the negotiations or able to negotiate competently given the splits within the Iranian government. Secondly, the Iranians continue to go ahead in the laboratories, as we saw with the announcement of this secret facility outside of Qom. At the same time, they’re clearly encountering difficulties in the laboratories, which perhaps gives us a little bit more time.

But most important, which you put your finger on, was the fraudulent June election and the emergence of a serious Iranian opposition. The stakes have now grown, given the degree of repression, and I believe that for the first time in the thirty years since the Iranian revolution, we have the emergence of a serious political opposition in that country that has significant and growing domestic support.

My view is that given that the negotiations are going nowhere, given that the Iranians continue to churn out enriched uranium at whatever rate they can in their labs, and given this political dynamic within Iran, the United States ought to find ways to support this Iranian dynamic--certainly rhetorically, but also in ways that would support the opposition rather than delegitimize it. The administration has to be careful. It has to be smart. But I do think there’s a case for supporting the opposition. The president made a step in that direction on December 28 when he made some remarks about U.S. support for the rule of law, and freedom, and democracy in Iran. I believe that sort of an approach should be sustained.

The Iranians are not attending the Afghan conference in London later this week. I guess they don’t want to show any support for the West right now?

Iran has reached a point where virtually everything that goes on needs to be looked at through the prism of what’s going on domestically there. And it helps explain the variations in their posturing at the nuclear negotiations. It may well explain what’s going on vis-à-vis Afghanistan. The fact is that historically, at times, Iran has played a helpful role in Afghanistan, and it’s one of the important players there, obviously as it is in Iraq. It’s a reminder how in the long run, Iran’s reintegration into the region and the world in a constructive way would be a major, major positive development.

My sense is that Iran’s domestic political dynamic, for the first time in three decades, holds out just that possibility. I don’t think any of us know how close Iran is to meaningful political change--whether we’re talking months, years, or whatever. But important things are going on there, and my only advice, or suggestion--to the U.S. government, to Congress, but also to other governments--is that rather than design and implement their policy solely with regard to the nuclear talks, which increasingly look like a long shot, they ought to increasingly design and implement their policy thinking about what effect it might have on the balance between Iran’s opposition and Iran’s government. What we really need is a reorientation of U.S. and European policy toward Iran.

Each Friday, I look at what is happening in President-Elect Joe Biden’s transition to the White House. This week: Biden faces substantial obstacles in his bid to remake U.S. foreign policy after four years of America First.