President Barack Obama has laid out a vision for U.S. foreign policy calling for the need to avoid both unnecessary military entanglements and isolationism. CFR President Richard N. Haass said the speech at West Point on May 28 appeared too focused on what the president opposed and less on what he favored. "It was an attempt to essentially carve out a form of involvement in the world that avoided any and every excess," Haass said. "But with one or two exceptions, it didn’t provide any specifics." Obama’s call for ramping up support for non-jihadist rebels in Syria is welcomed, Haass said. 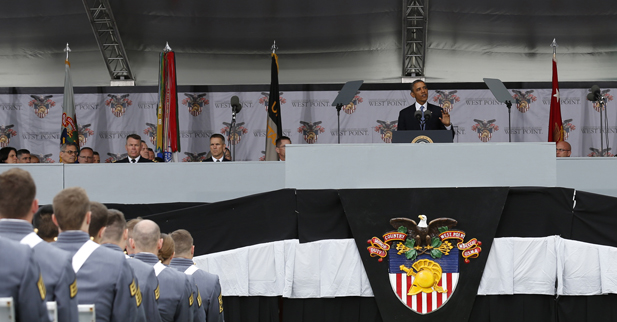 What did you think of President Obama’s major foreign policy speech to West Point graduates today?

It seemed to be a speech that didn’t so much lay out a clear path of what he favored so much as what he opposed. It was against isolation; it was against indiscriminate intervention; it rejected too much use of force but also rejected too little.

It was an attempt to essentially carve out a form of involvement in the world that avoided any and every excess, but with one or two exceptions, it didn’t provide any specifics.

The day before, he laid out his Afghanistan policy, which was to get U.S. forces out by the time he leaves office.

That’s correct. I was disappointed with his statements on Afghanistan.

The most serious reason was that it laid out an approach that was calendar based rather than conditions based—so that we would have 9,800 forces [remaining in Afghanistan] by the end of this calendar year, roughly half of that a year later, and none left by the end of 2016. But missing from that was a sense of the actual developments on the ground.

I don’t believe the United States should be against extended deployments of troops if the assessment is made that the investment is justified. We kept troops in Europe, as you know, for decades. We kept troops in Asia for decades. And we did so because we, the United States, through successive administrations, decided the benefits outweighed the costs.

I would much prefer an approach to Afghanistan that said we would drop down to 9,800 troops by the end of the year. These troops would have missions of advising, training, and limited counterterrorism, and we will consistently reassess this decision. And as long as this deployment continues to make sense we will continue it. And if we reach the decision that it does not make sense, we will not.

I would much prefer this approach than something that is arbitrary. I would also prefer something done in consultation with the new Afghanistan government, which has yet to be chosen. This is a less-than-ideal way to inaugurate a relationship with the new government—to have made such a far-reaching decision before this new government exists.

Some former U.S. military officers have been criticizing the president, saying that the Taliban would sit back and wait to come back in.

Some of that is probably inevitable. It is also a question of degree and raises questions in the minds of the new government on how much they can depend on us. It obviously weakens our ability to influence their behavior and the behavior of the international community. It is a bad way to go into something that I would like, which is a regional group along the lines of the Six-Plus-Two mechanism, of Afghanistan’s neighbors plus the United States and Russia. This weakens our hand in all of that. I just don’t understand the strategic rationale—keeping ten thousand American troops in Afghanistan is not a game changer for the global capacity of the U.S. military, but could be a game changer for Afghanistan.

I saw you tweeted this morning that you liked Obama’s comments about Syria.

We haven’t seen the details, but one of the things I liked in the West Point speech was the commitment to do more to help Syria’s neighbors deal with the refugee burden. This concerns mostly Jordan but also Lebanon and Turkey. The phrase he used was to "ramp up support" for the non-jihadist opposition, so it could put some pressure on the [Bashar al-] Assad government. This is something I have advocated for a long time. It is an alternative between doing little or nothing and putting boots on the ground, which would be unwise. If it goes well, it might increase the prospects for diplomacy. So it is one part of the speech that I welcome.

In the speech Obama was very proud of his actions on Ukraine and his dealings with Putin. Do you think he has exaggerated his success?

Right now, in the aftermath of the recent presidential vote, Ukraine has stabilized somewhat, and we will soon have a new Ukrainian government. So the question is: "What will they be prepared to do to bolster the economy and to send some reassuring signals both to their neighbors and their citizens?"

Russia, for the time being, seems somewhat more willing to let things play out, possibly because of the impact of sanctions, possibly because Mr. Putin realized it was not in Russia’s or his interest to have a failed Ukraine on his doorstep. I hope it is a beginning of a trend.

Of course, Putin and Obama will be in Normandy on June 6 for the seventieth anniversary of the D-Day landing. There is no indication they will meet and talk.

Simply because we disagree over Ukraine doesn’t mean we shouldn’t talk about Ukraine. More importantly, the United States and Russia still have some areas on which they should and can agree, whether it is in blocking Iran’s path to nuclear weapons, or in containing or ridding North Korea’s nuclear weapons, or in stabilizing Afghanistan, or defeating terrorism. What we need to do is work out a relationship with Russia where we hopefully limit or reduce our differences over Ukraine and Russia’s near abroad and preserve our ability to work together on other issues.

Are you worried about the vote on the European Parliament?

It is revealing because it shows the consequences of prolonged austerity and prolonged economic drift. What we see across Europe is a real growth in populism, a real growth in alienation, some unattractive parties gaining relative position not only because of low turnout, but also because a large number of working-class and middle-class people in Europe have seen their living standards deteriorate.

Is the same thing at work in the United States? Obama’s devoting the next few weeks to foreign policy but the rest of the summer to domestic policy.

"For me the issue is not whether the president focuses on foreign policy or domestic policy. They are simply two sides of the same coin that I call national security."

In the United States, it’s important to get economic growth revived or you will see alienation and radicalism increase across the political spectrum. You will see manifestations on the left with calls for redistribution or "doing things about inequality," or in calls to radically shrink government on the right. For me the issue is not whether the president focuses on foreign policy or domestic policy. They are simply two sides of the same coin that I call national security. He has to focus on both. What I was hoping to hear more of today and didn’t was just that. There was no reference to the need to build congressional or public support for trade agreements. There was no call for comprehensive immigration reform, no push for infrastructure, no mention of entitlement reform. So all these issues, which are "domestic," which are at the heart of national security, were not addressed.

What I would hope is that the president makes a concerted effort to tie our foreign and domestic policies together so that people understand that what happens here in the United States affects our ability to act in the world, and what happens in the world will in many ways affect the quality of life here. That was perhaps implicit in the speech. That has to become explicit in the administration’s choice of priorities between now and the end of 2016.