President Obama’s State of the Union address failed to seize an opportunity to begin to build bipartisan support for crucial issues such as trade expansion, infrastructure development, and corporate tax reform, says CFR President Richard N. Haass. On foreign policy, he said, there were some surprise omissions such as the U.S. strategic rebalance to Asia—and no mention of the upcoming Obama trip to India—and the Israeli-Palestinian conflict, on which the administration has expended a great deal of energy. Notable in the speech, he said, was the president’s reference to cybersecurity. "What is clearly happening is that cyber is emerging as a major new domain of international competition, and the technology has—so far at least—far outpaced the diplomacy," he said. 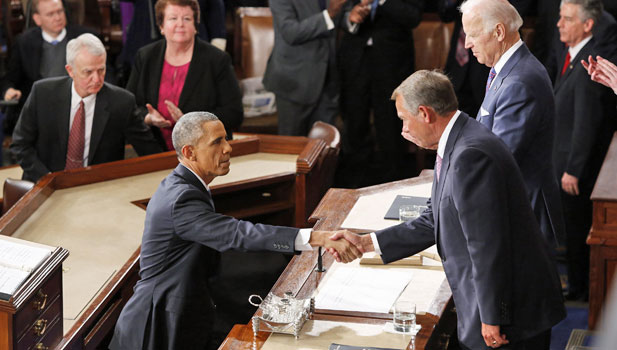 What was your impression of Tuesday’s State of the Union address?

I thought the president and the White House erred. It was as if they confused January 2015 with January 2016. This year is the last real window for governing. So I would have thought this State of the Union should have focused much more on areas of real promise for cooperation between the White House and a Republican-controlled Congress. That would have left the framing of the 2016 [presidential] election to next year’s State of the Union. So I was surprised and disappointed because there are important things that need doing and I don’t believe this speech did much to increase the odds they will get done.

You mean you thought all the talk about tax reform, which the Republicans will clearly not approve, was a waste of time?

Yes. All the emphasis on class and on tax increases that are not going to happen seem to me to be more political than policy. And again I would have thought that would have been better left for a year from now. I would have focused much more on the things that might get done: perhaps corporate tax reform, maybe some sort of indexing of a gasoline tax, now that gasoline prices are so much lower. I would have made a far more robust and positive case for trade rather than the surprisingly lukewarm or, at times, even negative approach that the president made. I would have been more specific on what could be done in the way of infrastructure. The president should have focused more on those areas where there was a realistic chance of bringing the Republicans along, or meeting the Republicans halfway, and save what you might describe as the framing issues for a year from now.

There was one point in which he talked about U.S. leadership in Iraq and Syria in "stopping" ISIS’s advance. I wish it were so. There is perhaps a case to argue that we’re doing better in Iraq. It is impossible to make the case that we are doing better in Syria. So that seemed, to me, off. He again took a shot at his predecessor [President George W. Bush], for his approach to intervening in the region. And I would have thought that this president would have been slightly more circumspect about doing something like that, if only because of the difficulties he has encountered both in Libya and Syria, because of what he has done and what he has not done.

He spoke as if Afghanistan and Iraq were success stories.

On Afghanistan, which was mentioned early in the speech, what he highlighted were U.S. troop levels, rather than highlighting conditions in Afghanistan. Indeed, I’m still hoping, perhaps unrealistically, that before this president leaves office he revisits and reverses his decision to pull all U.S. troops out of Afghanistan by the end of 2016. But there was no reference to conditions there, much less in other places, from Yemen to Libya, where essentially we have the reality of failed states.

And as far as I can tell he didn’t even mention the Israeli-Palestinian negotiations, which he spent more time on than any other issue.

There were several interesting non-mentions. That was one: the lack of any mention of Israel in the context of the Palestinian issue. There was also no mention of what was arguably his signature foreign policy initiative of his first term, which was the pivot, or rebalance, to Asia.

And oddly there was not even a mention of India, where he is going next week. It would have been very easy to tee that up. The only mention as I recall—I could be wrong here—of Japan was more of a negative mention in the sense that Japan was grouped with Europe in a comparison of job creation. There was no mention of the centrality of Japan or say South Korea, or more broadly of the Asia Pacific region in America’s vision of twenty-first century order.

Why do you think the Asian initiative was left out?

This has been a pattern in the second term. It may be due to the change in personnel at the top, but the entire pivot or rebalance, which was most associated with people like [former Secretary of Defense secretary Robert] Gates, [former Secretary of State] Hillary Clinton, and [former National Security Advisor Thomas] Donilon, seems to have been somewhat orphaned in the second term. And either you see a movement away from foreign policy or you see a reluctant reentry into the Middle East.

And on Russia, he mentioned Ukraine, and that was about it.

Yes, the mention of Russia was somewhat belittling. I wouldn’t have recommended he do it that way, in part because we still face the reality of Russian interference in Ukraine. We still face the challenge of getting Ukraine’s government to do constructive economic and political reform. And the goal isn’t to humiliate Russia. The goal should be to get Russia to rethink what it is doing, and ultimately to reintegrate itself into Europe on terms that we, and they, can live with. I didn’t see any move in that direction.

So what now is going to happen in Obama’s remaining two years?

The president called for Trade Promotion Authority but did so in a way that embedded the trade issue predominantly in the context of protecting U.S. workers. He didn’t make the strategic case for trade that it enhances interdependence and he didn’t directly make the argument that trade can be a source of high-paying jobs for U.S. workers, though he referred to that obliquely.

He also said that previous trade agreements hadn’t lived up to the hype. That’s an odd way of creating an atmosphere for future trade agreements, particularly when one could argue that the strength of North America is in no small part a result of the accomplishments of NAFTA. So we’ll see how the trade politics evolve, but I didn’t come away thinking that the president had laid a political and intellectual foundation for where the administration, I believe, wants to go.

"This State of the Union should have focused much more on areas of real promise for cooperation between the White House and a Republican-controlled Congress."

The other issue is Iran. That will be the other big issue of the year. And the president drew a very clear position against additional sanctions at this time, essentially arguing, I think correctly, that what we need right now is space to conduct the negotiations. And he threatened to veto if Congress were to try to impose new sanctions at this point. I would think there is probably a way of working this out where you would have some statement of congressional intent about new sanctions kicking in down the road. I would simply suggest that the trigger of any potential new sanctions not be linked so much to what is happening in the negotiations, but rather as to what Iran is doing in its laboratories.

Obama seemed very optimistic that he could get an agreement with Iran.

I don’t think the question should be whether we get an agreement so much as what the agreement entails. And I would simply predict that with or without an agreement, we are going to have to live with a challenge posed by Iran’s nuclear program. With or without an agreement, that challenge is not going to go away, and we need to prepare ourselves for this becoming a long-term issue. So an agreement by the end of June will not make the problem go away, and the absence of an agreement by the end of June doesn’t mean we have a crisis on our hands. What matters most, again, is what Iran is doing in its labs and [whether] that is something that we determine we can live with or is unacceptable, in which case we have to think either about additional sanctions, or as the president hinted at last night, the possibility of military force.

The other issue that emerged [in the speech], and my guess is it won’t be the last time a president speaks about it, was cyber. And what is clearly happening is that cyber is emerging as a major new domain of international competition and the technology has—so far at least—far outpaced the diplomacy. The president in the past—not last night, but in the past—has referred to the world of cyber as the Wild West, and I think that’s true. There are very few rules, and there’s no sheriff.

Sometimes in a State of the Union you don’t necessarily have to put forth solutions, but rather you highlight issues—emerging issues—and that’s pretty much what we heard last night in the case of cyber. This is emerging as a major new challenge to U.S. national security and to U.S. economic security.