Twin explosions in the Russian city of Volgograd killed more than thirty people on December 29 and 30 in what authorities suspect were suicide bombings carried out by Islamist terrorists from the nearby North Caucasus, the "site of Europe’s deadliest ongoing conflict," according to the International Crisis Group. "Widely shared feelings of inequality and injustice" and "poor prospects for getting ahead in life" have driven the insurgency, and only been exacerbated by "counterproductive" government policies, says Dmitri Trenin, director of the Carnegie Moscow Center. While Moscow has gone to great lengths to ensure security at the Sochi Winter Olympics, which is less than six weeks away, terrorists "may aim to overshadow the sporting events with some heinous act elsewhere," he says. 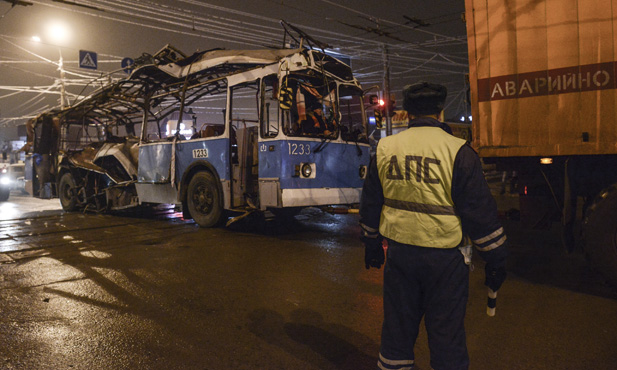 No one has claimed credit for the attacks yet, but observers were quick to note that Doku Umarov, the leader of an Islamist insurgency in the nearby North Caucasus, called off a cease-fire in July and has encouraged attacks against Russia to disrupt the Olympics. Who are these insurgents? What is driving them?

Umarov is more of a symbolic leader of the Islamist extremists than an actual commander-in-chief. The "caliphate" he leads is, above all, a cause. Adherents to the cause reject not just the Russian state, but the way of life of the "infidels." They seek to restore the original purity of Muslims and severely punish apostates. They also want to drive the Russians out of the lands populated by Muslims, such as the Caucasus and the Volga region. This is not a separatist insurgency of the type prevalent in the first Chechen war of the mid-1990s, but something closer to al-Qaeda-style operations.

Before these back-to-back bombings, a suicide bomber blew herself up on a Volgograd bus in October. What has made the city, in between Moscow and the Caucasus, an attractive target? 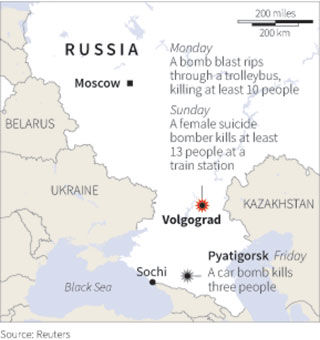 Volgograd is a major ethnic-Russian city outside the North Caucasus; it sits on the main road from Dagestan to Moscow; and, as the former Stalingrad, it has special significance to the Russians as the scene of the battle that turned the tide of World War II. To the terrorists, it may have special attraction as a relatively soft target in comparison to Moscow, the nation’s capital, and Sochi, the Olympic Games venue.

Sochi lies near a volatile part of the federation. Why did Putin decide to stage the Olympics there?

Russia did not have too many good options for the Winter Games, and the North Caucasus was best. Despite its relative proximity, the Sochi area had not been affected by the insurgencies in Chechnya and Dagestan. As a place traditionally used by Kremlin leaders for vacation, it has a significant security presence, and as a seaside resort on the Black Sea, it is easily accessible.

Chechnya has been generally quiet for a decade, but in terms of vulnerability to terrorism, proximity to conflict does not play a critical role: take London, Madrid, or Boston, for example.

How much support does the insurgency have?

Islamist extremism in Dagestan and elsewhere in the North Caucasus has the support of a significant portion of the population; otherwise, it would have been crushed. This support is driven by the widely shared feelings of inequality and injustice; an atmosphere of widespread corruption among local elites; and, very importantly, poor prospects for getting ahead in life.

The collapse of traditional agriculture in much of the Caucasus, and the collapse of local Soviet-era industry as a result of the post-Communist socioeconomic transformation have resulted in very high degrees of unemployment among young males. When they leave their villages and come to towns, they are often disillusioned and become willing recruits for extremist causes.

How have Russian policies affected Caucasian support for the insurgency?

The Russian government’s policies and practices have often been counterproductive. Moscow’s reliance on local elites and indulgence of their ways; its heavy-handed "war on terror," which breeds new converts to extremism as it seeks to neutralize existing ones; and the surviving imperial approach to the Caucasus have all contributed to worsening security.

Even where federal authorities have seen the light and proceeded with mass employment projects, corruption, both in Moscow and in the Caucasus, has reduced the positive impact of these ventures and even produced more resentment. Moscow’s policies are also often inconsistent, which undermines its credibility.

Antiterrorist cooperation between the United States and Russia has not improved markedly after the Boston bombings. As elsewhere, security services are loath to share too much information. In the U.S.-Russian case, mutual mistrust runs particularly deep. Cold War hostility is anything but forgotten, and post–Cold War collaboration has been less than satisfying for either party.

An influential school of thought in Russia believes the United States is using the North Caucasus insurgency to destabilize Russia and weaken it. For some in the United States, Russian spies in America fall into the same category as al-Qaeda operatives. It is no wonder the Russian security services are not interested in sharing information about their war on terror within Russia with their U.S. colleagues, the more so that they do not think Americans have much to share with them on that issue.

With longstanding concerns about terrorism marring the games, Russia had already made substantial investments in security. What do the bombings mean for how the Olympics will proceed?

Security in Sochi ahead of the games is tight. President Putin has spared no effort to protect the Olympics from the threat of terrorism. Still, Russia is a vast place with many security vulnerabilities that cannot all be protected. The terrorists may not strike at Sochi itself. They may aim to overshadow the sporting events with some heinous act elsewhere.

How will the attacks affect Putin’s ambitions for the games?

Putin will not be toppled by the terrorists, of course. However, he feels that his own prestige, as well that of the state within Russia, and of Russia in the world, are at stake. His ambition is to hold a safe, successful Olympics. This will be tough, but everyone had known it from the start.

After decades of sustained land operations, the U.S. Marine Corps is looking back out to sea, embracing its roots as a naval expeditionary force.