Skip to main content
The U.S. Dilemma in Egypt

Almost three years after the ouster of Egypt’s former president Hosni Mubarak, the country’s military is consolidating its political control, giving Field Marshal Abdel Fattah al-Sisi the green light to run for president in April elections. The army’s heavy-handed crackdown against the Muslim Brotherhood has the United States concerned "that Egypt is going down a path of persistent instability," says Egypt expert Michele Dunne, fueling "Islamist extremism and terrorism in Egypt and throughout the region." Such extremism could also turn against Americans, but the United States must continue aid to Egypt as it needs a regional security partner and a peace partner for Israel, Dunne says. 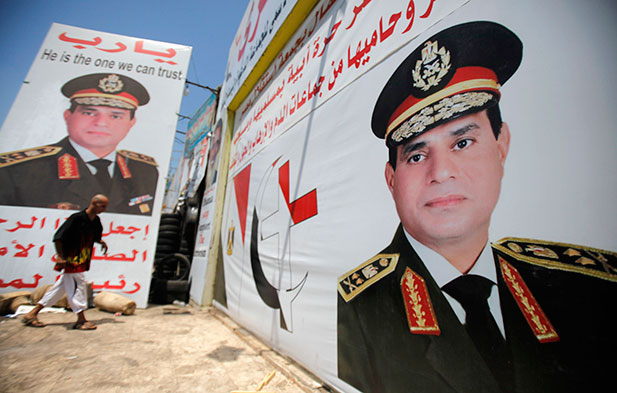 Sisi is widely expected to run and win the presidential election. What kind of a country would he be taking over?

Whoever takes over control of Egypt under the present circumstances would face tremendous challenges, and Sisi will be no different in that regard. He will have more cooperation from the army, from the police, from the seven million-strong Egyptian government bureaucracy than President [Mohammed] Morsi had, but it will be very difficult to restore stability to the country.

In fact, the country has become much less stable in the six months since Morsi was removed, because [the military’s] attempt to repress, exclude, and even crush the Muslim Brotherhood is, not surprisingly, being met with a great deal of resistance. There have been very persistent pro-Morsi, open, peaceful demonstrations—surprisingly persistent in the face of tremendous repression by the government. And now there has been an increasing terrorist campaign by the Sinai-based group Ansar Bait al Maqdis. They are carrying out suicide bombings and assassination attempts on officials, and now they are using shoulder-fired missiles. So there is an escalating armed Islamist insurgency as well as significant and persistent street demonstrations. It’s going to make it really difficult to get the economy back up on its feet.

Three years ago this month, there were huge crowds in Tahrir Square calling for the ouster of President Hosni Mubarak. Most of the demonstrators were young and secular liberals, not members of the Muslim Brotherhood. Where do they stand now?

The secular groups that were involved in the Egyptian revolution, some of whom were liberals, and leftists, some of whom were Nasserists, have been divided by the military coup. Frankly, they have been persistently pushed aside by the larger forces in the country—the military on one hand and the Islamists on the other, since the revolution initially happened. We have to look back and remember, three years ago when Mubarak was removed, the military took control. In Tunisia, the Tunisian military took control from Ben Ali and removed him, but then it turned around to civilians and said, "You figure out where we’re going." The Tunisian army did not attempt to make the decisions, and they fostered a roundtable process among civilians.

How did Egypt’s approach differ?

In Egypt, the military retained control and worked with the Brotherhood closely in the year following the Egyptian revolution to make all the decisions about how the transition would go, and sidelined the secular political forces. That process brought the Brotherhood to power via parliamentary and presidential elections. Then the Brotherhood and the military had a falling out. The military removed the Brotherhood, but once again, the secular forces are being set aside. Some of those secular groups supported the coup against Morsi, and some of them now have openly regretted that decision. Others are still sticking with the military and supporting Sisi, but it was interesting to see the reaction of a lot of secular political parties and figures to announcements that Sisi basically will be running for president and will be the next president. A lot of them have been cool to it. They thought that they, the secular parties, would be the beneficiaries of the removal of the Muslim Brotherhood from the scene, but that hasn’t turned out to be the case.

Those among the secular activists and political figures that have explicitly protested all the signs of returning military rule and repressive police rule are now very much under attack. The major figures associated with the April 6 Youth Movement are now in prison, and many other prominent secular figures, several former members of parliament, and even some academics and journalists are the targets of lawsuits. Anyone who is now critical of Sisi or military rule is in danger of being prosecuted.

What do we know about Sisi ?

General Sisi was a member of the Supreme Council of the Armed Forces, the group that controlled Egypt after the revolution and was headed by former defense minister Mohamed Hussein Tantawi. Sisi was part of the next generation after Tantawi. Tantawi, whom Morsi removed in August 2012, was in his seventies. Sisi was in his fifties. He was seen as one of the brightest and most ambitious members of the staff. Clearly Morsi and the Brotherhood worked with him to displace Tantawi and elevated him to the defense ministry with the understanding that he would be loyal and that he would be under the control of the civilian president, Morsi.

Let’s return to what the core U.S. interests are regarding Egypt. The United States wants Egypt to be a security partner in the region and a peace partner for Israel. For Egypt to do those things, the country has to be reasonably stable. The country will not be stable if there is not an open political process by which citizens can get their rights from the government and make the government accountable to them. There’s a lot of worry in the United States that Egypt is going down a path of persistent instability. There’s also a lot of worry that this very broad crackdown against the Muslim Brotherhood is going to fuel Islamist extremism and terrorism in Egypt and throughout the region. This can eventually turn against Americans as well. The United States needs to be concerned about these things.

Should the United States ostracize Egypt or try to cooperate?

I don’t expect the United States to cut ties with Egypt. They’ve been in very close contact. Secretary of Defense Chuck Hagel seems to converse with General Sisi frequently. So there is no desire to cut Egypt off. The question is: How do you send a message that we want to cooperate with you but we are very concerned about the course you’re pursuing? There’s reason to be concerned that if we just give all the aid and other benefits we’ve given for years, the message is that everything’s great; we approve of the decisions that you’re taking. That’s not the message that the United States wants to send. I’m not expecting the United States to cut Egypt off altogether, and I’m also not expecting the United States to warmly welcome the developments in Egypt that we’re likely to see in the coming months.