The United States and South Korea look to reaffirm their special security and economic alliance during President Park Geun-hye’s first state visit to Washington this week. Scott A. Snyder, CFR’s top Korea expert, says, "Both sides are eager to share with each other messages of assurance, given the tensions with North Korea." On economic affairs, he notes that while "there have been no real hiccups so far" regarding the now one-year-old U.S.-Korea free trade agreement, "a potential issue" will be whether Seoul may join the Trans-Pacific Partnership negotiations (PDF), a proposed regional free-trade pact that includes the U.S and eleven other nations. 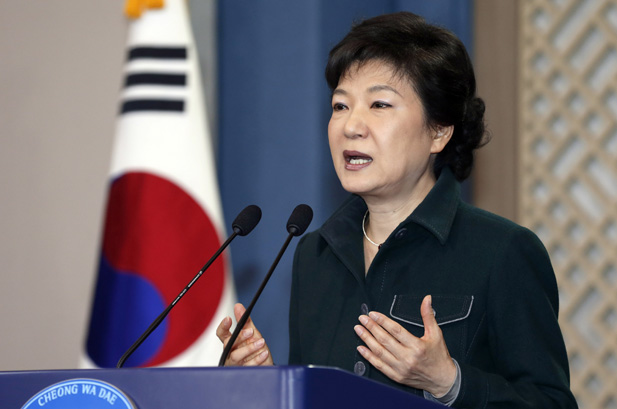 Recently elected president Park Geun-hye of South Korea is set to meet President Obama tomorrow at the White House, and will later speak to a joint session of Congress. What do you expect from this high-level visit?

It’s really a "getting to know you" meeting for both President Obama and President Park in the context of the long-standing close relationship between the United States and South Korea. Under the current circumstances, both sides are eager to share with each other messages of assurance, given the tensions with North Korea. The United States is going to want to assure Seoul of its commitment to South Korea’s security, and I think President Park will want to provide an assurance to the United States that she is a stable and capable crisis manager.

On the economic situation: For a while, there were some tensions in the U.S.-South Korean relationship over trade issues. Have they been resolved?

We just celebrated the one-year anniversary of the Korea-U.S. free trade agreement, and I think it has been going fine. There’s some marginal increase in trade between the United States and South Korea, and there have been no real hiccups so far. I’m sure both sides will want to talk further about implementation, but there are no real outstanding bilateral trade issues right now. There will be a potential issue relating to whether South Korea might join multilateral negotiations of the Trans-Pacific Partnership (TPP).

Right now, there are about twelve different countries involved; Japan has just indicated its desire to be included.

The TPP is a stepping stone to a high-standard, free trade arrangement in Asia. It’s standards-based, so not everybody has opted to join, but it’s really the main prong of U.S. economic engagement with the Asian region.

On April 30, the two-month joint military exercises between South Korea and U.S. forces ended. During that period, we had North Korea issue major threats about possible war almost on a daily basis. But this seems to have died down. Is that connected to the end of these drills, or do you think China told them to quiet down?

I’m not sure that anybody would be able to say exactly what has caused North Korea to turn in a different direction, but we have seen strong North Korean reactions to these exercises in the past. They were obviously stronger than usual this time, but we also saw a very strong U.S. show of force.

We’ve seen the initiation of higher-level engagement between the United States and China on North Korea, and we don’t necessarily know whether Beijing has taken special measures to try to calm the situation down. But the promised mid-range missile exercises that North Korea seemed to be planning as of the second week of April did not materialize, and there’s a possibility that they could be postponed for an indefinite period of time.

Talk about this flap over the Kaesong Industrial Park, which has been a joint economic area for North and South Korea for several years. Why have they suspended cooperation there?

The suspension of Kaesong makes no sense from an economic perspective because the North Koreans were getting something like $80 million a month in salaries. Kaesong also represented about $1.7 billion in trade between the two Koreas, and that represents about 20 to 25 percent of North Korea’s overall external trade. So from an economic perspective, North Korea is biting the hand that feeds it--but there may be a political rationale. If indeed Kaesong is having internal effects on the North Korean population that are altering or diminishing their loyalty to the regime, Pyongyang may have serious reasons to be worried.

Can you explain that a bit more?

Basically, at Kaesong, North Korean workers came every day to a South Korean trade zone where South Korean companies were operating. [The North Koreans] provided labor, but the infrastructure is all up to South Korean industrial standards, and the payments to the workers went to the North Korean government. But at the very least, any North Korean who was working in the complex would get a good lunch and possibly some other treats to take home with them.

And so the concern would be that the observable gap between South Korean standards and North Korean living conditions might be great enough that it would create a lot of doubts and questions among North Koreans about the capacity of governance in North Korea.

Your colleague Victor Cha, in his book The Impossible State, points out that back in the 1970s and 1980s, before the collapse of the Soviet Union, North Korea’s economy was booming compared to South Korea’s. Do people remember those days in North Korea?

Yes, people do. In fact, a lot of North Korea’s economic strategies in recent years have been very much backward-looking in the sense that some of the tactics and slogans seem to have been designed to capture the "good old days" of the 60s and 70s. But that was a command economic approach based on labor mobilization, and the problem is that those tactics basically have exhausted themselves in terms of their ability to produce results.

And they also depended on Soviet and Chinese competition, I gather.

You took the words right out of my mouth. Plus, the patrons of those days--the Soviet Union and China--are no longer there. And so it’s very clear from the data that the loss of inputs, especially fertilizer from the Soviet Union, but also infrastructure, in terms of aid donations, had a tremendous impact on the North Korean economy in the early 1990s, and it really precipitated a different environment.

Why did North Korea decide to go nuclear?

You could argue that the seeds of the idea for a North Korean nuclear program might have come with the end of World War II because Kim Il-sung, as a guerrilla fighter, had been trying to figure out how to beat the Japanese for years--and it was the atomic bomb that brought his main enemy to an end. But then there was also, during the Korean War, an active U.S. nuclear threat. And so again, from a North Korean perspective (especially following the devastation of the Korean War), if you wanted to develop a weapon that would help to provide a sure deterrence, nuclear would probably seem like a good option.

On a separate, more timely issue: What do you think of this situation regarding Kenneth Bae, the U.S. citizen who last week was sentenced to fifteen years of hard labor by the North?

This is an unduly harsh sentence that is disproportionate to the stated offense. Fortunately, in other circumstances where similar sentences have been handed down to Americans in North Korea, the citizens have been expelled rather than being forced to serve out their sentence, usually in conjunction with visits to Pyongyang by high-level Americans.

However, while the United States wants to ensure fair treatment for its citizens, the practice of sending prominent Americans [i.e., Bill Clinton, Jimmy Carter] to secure release of U.S. citizens is part of a pattern that the Obama administration surely wants to break. Based on the 2009 pattern of interactions, the sentencing may also be a sign that North Korea is finally prepared to release Bae following his conviction as a step toward easing of tensions.

And have we learned anything more about Kim Jong-un?

Over the course of the past year, we initially saw a period of about four months where he seemed to be focusing on economic improvement. In his first major speech, he talked about how he wanted to ensure that North Koreans didn’t have to tighten their belts again. But then from August to September of last year, it seems like his focus shifted to the military, where we saw a lot of reshuffling, basically as part of a process of political consolidation. And that certainly was the main focus of all these recent threats. Then one of the curious things that occurred was this Central Committee party plenary at the end of March, at which a policy of focusing on nuclear capability and economic improvement was adopted. And since early April, it seems that, internally, the focus of attention has shifted back toward nonmilitary issues, in terms of Kim Jong-un’s visits and public activities.

And I see his wife has reappeared in public.

Yes, Dennis Rodman broke the news that he had a baby girl with his wife.