The latest revelations over the widespread U.S. eavesdropping of phone calls throughout Europe including those of its top leaders, like German chancellor Angela Merkel, is prompting "Merkel and others to say this scandal is eating away at the fabric of trust that is part of the alliance," says CFR’s Charles A. Kupchan. President Barack Obama was widely hailed when he came into office in 2009, Kupchan says, but now "it’s difficult to untangle the political discomfort with U.S. spying from disappointment in Europe about Obama’s inability to strike a better balance between security and civil liberties." He adds that many Europeans feel that Obama "has failed to deliver on his pledge to clean up some of the excesses left behind by the George W. Bush administration."

More From Our Experts
Thomas Graham
Can U.S.-Russia Diplomacy Ease Ukraine Tensions?
Stephen Sestanovich
The Russia-Ukraine Crisis: A Scorecard on Biden’s Response
Charles A. Kupchan
Is Bosnia on the Verge of Conflict?

The latest revelation that the NSA spied on leaders like German chancellor Angela Merkel and as many as thirty-four other heads of state has stirred quite the controversy abroad. How serious a flap is this causing within the alliance?

I think the seriousness of the fallout over the Snowden revelations mount by the day and that’s because of the way that they’re dribbling out. If there had been one big disclosure, and the information was in the public domain in one fell swoop, I think [the uproar] would have died out by now. But what we’re seeing now is one day we find seventy million French phone calls and texts have been scooped up. The next day, Chancellor Merkel’s phone may have been tapped, and then sixty million Spanish phone calls and texts have been scooped up. And so it’s creating a situation where what was a relatively minor flap is turning into a major transatlantic issue with potentially harmful consequences.

I think part of the response feeds on itself: That is to say, Merkel and French president Hollande know that friends spy on friends. Their [citizens] are the ones who are most upset because this kind of spying within the family wasn’t well-known publicly, and that has pressed European leaders to take a stand. Now, I think it’s mixing with personal indignation and that Merkel perhaps justifiably feels violated that her personal cell phone was tapped by a close ally. And that creates a situation where political feedback is mixing with sincere anger to put pressure on the United States to be more forthcoming in its response.

It’s ironic in that Obama has been so identified with Germany, having gone to Berlin as a candidate in 2008 and then this past June to give a speech about the necessity of forging closer ties with an expansive trade agreement between Europe and the United States. How are these revelations going to affect the transatlantic free-trade deal?

More From Our Experts
Thomas Graham
Can U.S.-Russia Diplomacy Ease Ukraine Tensions?
Stephen Sestanovich
The Russia-Ukraine Crisis: A Scorecard on Biden’s Response
Charles A. Kupchan
Is Bosnia on the Verge of Conflict?

You’re right to focus on the symbolism because you have the Bundestag reconstructed since the capital moved back to Berlin from Bonn, with a glass dome to signify transparency. You had Obama just a few hundred yards away speaking at the Brandenburg Gate. And nearby you have the American embassy, where the monitoring of German phone calls was taking place. And so, that’s the symbolism that creates this loss of trust, which prompts Merkel and others to say this scandal is eating away at the fabric of trust that is part of the alliance. Now, what concrete consequences will there be? Well, several voices in Europe said, "Let’s suspend the free-trade negotiations," "Let’s take other steps to express our displeasure." I don’t think those threats are particularly credible and the Europeans would only be shooting themselves in their own feet if they backed away from the free-trade negotiations with the United States because they stand to benefit significantly.

"Given how much political distress there is in Europe, I think the United States needs to do more than say this is business as usual."

Where I think the action is now is on the negotiation of a code of conduct, new rules of the road that would provide a framework for intelligence-gathering within the Atlantic Alliance. And the kinds of ideas floating around would be no snooping on officials above a certain level; or no significant intelligence gathering without informing the intelligence agency of the other side. You would not want there to be restrictions so onerous that the Germans or the French or others might imperil themselves, [such that] if the United States today gets information about an impending attack or a terrorist cell in Germany it doesn’t share that information with the Germans. The Germans don’t want us, the United States, not to track down that information. It’s a fine balancing act, but given how much political distress there is in Europe, I think the United States needs to do more than say this is business as usual.

And then the other place where we’re seeing some concrete activity is, number one, some legislation that’s moving through the European parliament that would tighten privacy laws and make it more difficult for Europeans to share information with non-European companies like Google and Facebook. And the second area is, in Germany for example, some companies are attempting to take advantage of the political backlash against the NSA scandal by offering users U.S.-free networks. That is to say, "if you sign up with us, your email traffic and your phone calls will pass through fiber optic cables and servers to which the NSA doesn’t have access."

Now, whether that works remains to be seen. I think it’s probably a somewhat futile move because you know a lot of these Germans will keep their Facebook and Google accounts, and their traffic will continue to pass through American servers.

That’s a very relevant question because it’s difficult to untangle the political discomfort with U.S. spying from disappointment in Europe about Obama’s inability to strike a better balance between security and civil liberties. For example, many Europeans believe that drone strikes in Pakistan are not just immoral but illegal. And as a consequence, they feel that Obama hasn’t delivered his pledge to clean up some of the excesses left behind by the George W. Bush administration. Another example would be on detainees, where the Europeans were looking forward to Obama’s willingness to close Guantanamo. That hasn’t happened yet. And even though Obama has stopped certain practices—renditions and other forms of what some people would call excessive interrogation techniques—there is disappointment in Europe that Obama hasn’t gone far enough. The NSA scandal just adds fuel to the flames.

Obama got the Nobel Peace Prize in his first year in office. Are Europeans still waiting for him to deliver?

I think that’s a perfect example of the gap that’s opened up between expectations and reality. 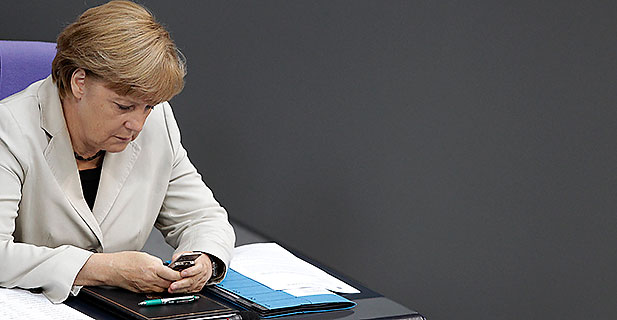 This has really been a tough year for Obama, both on the domestic and foreign policy fronts.

"The troubles right here in Washington have had a more negative impact than the discord across the Atlantic."

It’s been a very tough year. If you’re talking about the free-trade negotiations with Europe, the recent shutdown of the U.S. government was much more harmful than the surveillance scandal in many ways. Mike Froman, the trade representative, had to cancel his negotiating mission to Brussels. Now that negotiation will, I’m sure, pick up eventually. But the troubles right here in Washington have had a more negative impact than the discord across the Atlantic.

The Future of the European Union

Has Russia Ended the War Between Armenia and Azerbaijan?

Azerbaijan’s success in the conflict over Nagorno-Karabakh means Putin’s peace deal is likely to last. It also rules out further diplomacy.

Europe's Response to the Coronavirus