A year since President Abdel Fattah el-Sisi took office, human rights abuses in Egypt are occurring "at an unprecedented level," says Michele Dunne, an Egypt specialist at the Carnegie Endowment for International Peace. Nevertheless, she notes, Washington is deeply invested in the Egyptian military. President Barack Obama’s administration asked Congress for $1.5 billion (PDF) for Egypt for the coming fiscal year, nearly all in military assistance. She says the United States should consider rebalancing its aid package toward economic programs that support the welfare of the Egyptian people. 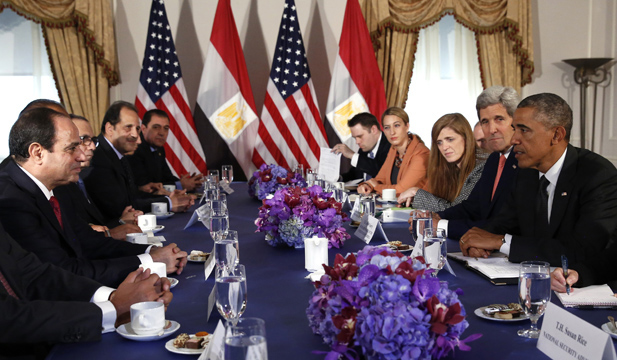 How would you characterize the Sisi regime a year on?

Many people speak of Sisi as recreating Hosni Mubarak’s regime, but this is far more brutal. This regime came to power through a military coup. That was different from Mubarak, who faced an opposition but not one this fierce. Whatever their mistakes and undemocratic actions, the Muslim Brotherhood, [which was affiliated with President Mohammed Morsi’s Freedom and Justice Party,]  are a significant movement. Deposing Morsi has caused his constituency to resist for the last two years. And the security services are given much more leeway to pursue opponents of the regime.

The Obama administration, which restored previously frozen military assistance to Egypt in March, has since said that Egypt was backsliding on rights and democracy, but nonetheless continued aid on national security grounds. In its budget request for the coming fiscal year, the administration requested $1.3 billion for Egypt in military financing and $150 million in economic aid. How does the White House view the regime’s ability to deliver domestic and regional stability?

The United States has invested tens of billions of dollars and decades of effort in this relationship to reinforce Egypt’s stability and its role as a country at peace with Israel as well as a force for peace and moderation in the region. So the United States is reluctant to distance itself from the current regime. At the same time, I think U.S. officials are concerned that the course that the regime is on is leading toward greater instability, even state failure, down the road.

"Many people speak of Sisi as recreating the Mubarak regime, but this is far more brutal."

In the late 1970s and early 1980s, the United States was giving as much economic aid as military aid, and there was a focus on programs to help Egypt develop, repairs its infrastructure, and reach prosperity. But there was resistance to reform, and so the economic aid withered from about $1 billion a year, not adjusting for inflation. Meanwhile, the United States kept military assistance steady, so the relationship became lopsided.

When the military stepped out from behind the curtain and took political control openly after a brief, failed attempt at a democratic transition in July 2013, it placed the United States in a bind. Abdel Fattah el-Sisi, who was defense minister at the time, never fulfilled promises he had made to get Egypt back on a democratic path, but the United States has been reluctant to fundamentally alter its relationship with the Egyptian military.

Does the resumption of military aid reflect an assessment by the Obama administration that Washington cannot influence internal Egyptian matters, like democratization and human rights?

One potentially promising change is that the administration has suspended cash-flow financing. That had allowed Egypt to enter into purchase contracts with U.S. defense companies years in advance, banking on future aid that Congress had not yet appropriated. If the contracts were ever canceled, the U.S. government would have to pay the penalties, to the tune of tens of millions of dollars. The United States is giving itself more freedom to change the amount and composition of the military assistance to Egypt on a yearly basis in the future, which potentially restores some U.S. leverage.

Egypt’s economy has struggled since 2011, with unemployment, officially at 13 percent and likely much higher, councentrated among the young. How is Sisi’s regime managing these challenges?

Political uprisings cause economic upheaval. President Sisi is attempting to get the economy back on its feet, but it isn’t yet clear whether his strategy for economic development is going to work. It is largely a state-driven, military-led strategy consisting of megaprojects. For example, the Suez Canal development project, in which private firms will be subcontractors to the military, will be more about generating transit revenues for the military than creating many jobs.

What is missing is a human-development strategy. Egypt has almost ninety million people and an enormous youth bulge. More than half the population is under age twenty-five. Its educational system is a disaster. There are also large public health challenges: for example, [the country is experiencing] a Hepatitis C epidemic. If Egypt is going to get its economy moving, it should have a bottom-up strategy based on educating people and attracting labor-intensive industries.

After several years of domestic tumult, how significant a player is Egypt in regional politics?

Egypt’s role in the Middle East has been diminished for many years, even before 2011, due to internal turmoil. When Gamal Abdel Nasser was in power (1956–1970), Egypt was seen as a model for other Arab states and was attractive to publics across the Arab world. That hasn’t been true for a long time now. Egypt has little soft power. And we can cross off economic power, because Egypt has neither an appealing economic model nor the ability to aid other states.

"Egypt was seen as a model for other Arab states and attractive to publics across the Arab world. That hasn’t been true for a long time now."

Egypt still tries to mediate regional conflicts from time to time, but its diplomacy has been constrained by internal problems. Egypt used to play a major role in mediating between Israel and the Palestinian parties, and, within the Palestinian camp, between Hamas and the Palestinian Authority. It can’t play that role as effectively anymore. By deposing President Morsi and declaring the Muslim Brotherhood a terrorist movement, Egypt has complicated its ability to mediate with Hamas, because it is affiliated with the Brotherhood. In Libya and Syria, Egypt might like to play a mediating role, but it won’t have anything to do with some significant political players because they are Islamists.

Egypt is still seen as an important ally by Saudi Arabia and the Gulf Arab states because of the size of its army, but since it is tied up with internal conflicts, its ability to project power outside its borders is limited.

How have Sisi’s relations with Israel and the Palestinian factions been?

Sisi has had a very good relationship with Israel since he came to power, and there has been a lot of cooperation in Sinai. He has put pressure on Hamas and generally kept the border with Gaza, including tunnels, more closed than his predecessors, including Mubarak. In fact he’s done it to an extent that even Israelis sometimes find extreme; there is a limit to how much pressure one can put on Gaza and still keep things quiet.

Egypt was on the verge of declaring Hamas to be a terrorist organization, but then the government backed off. It’s possible that it heard from some of its regional allies, whether Gulf states or even Israel, that this could be counterproductive, as there is no one but Hamas to control Gaza.

The Sisi regime has outlawed dissent and called the Muslim Brotherhood, which has renounced violence, a terrorist organization. Do you see the potential for blowback?

Dissent and anger are rising, especially among young Egyptians. The idea that once Sisi consolidated power everything would quiet down hasn’t come true. Meanwhile, Egyptian courts are issuing extreme verdicts, not only mass convictions but mass death sentences. Almost all the senior leadership of the Muslim Brotherhood has now been sentenced to death, though it’s impossible to know whether these sentences will be carried out. [Editor’s note: Egyptian courts have issued at least 547 death sentences under Sisi and carried out twenty-seven, according to Human Rights Watch. Many of the accused have been tried and sentenced in absentia.]

There is a significant insurgency inside Sinai, and it’s difficult to find out what’s going on. The military kicked out journalists and human rights activists. A lot of people are being killed both by Ansar Bait al-Maqdis, the main militant group in Sinai that has now affiliated itself with [the self-declared Islamic State], and the Egyptian army. The insurgency is, if anything, escalating. At the same time, small-scale attacks, most of them aimed at police in the Egyptian mainland, are increasing.

"The United States still has to decide whether it wants to be seen embracing and funding Sisi."

The United States says that Egypt is a major ally in the war against terrorism. The question to ask is: Is President Sisi’s strategy succeeding? There’s no evidence that it is. This presents the United States with a difficult situation. Human rights abuses are [being committed] at an unprecedented level. There are at least forty thousand political prisoners, and hundreds of documented cases of torture, sexual assault, and disappearances. Political life, media, and civil society have largely been closed off . The secular opposition and youth activists, in addition to the Brotherhood, Salafis, and other Islamists, have been silenced. It’s a pressure cooker.

The government has opened up investigations against some of the most prominent human rights organizations. Rumors in the press are that the government is going to construct cases against them, possibly including charges of espionage. It would silence just about the last group of voices that are trying to investigate and publicize what’s going on inside Egypt.

The United States can’t make President Sisi do one thing or another or control what happens inside of Egypt, but the United States still has to decide whether it wants to be seen embracing and funding Sisi. The United States often underestimates the extent to which people in the Middle East and elsewhere watch how it conducts these relationships.

While the United States doesn’t control all the levers, it has to make decisions about what it says in public and private and whether it thinks steps the Egyptian government is taking are leading toward or away from stability. The United States could, for example, rebalance this relationship by puting more support toward the welfare of the Egyptian people through programs such as educational scholarships and less toward the army. And it should speak up persistently about human rights abuses; silence on this score, while giving more than a billion in military assistance, signals endorsement of repression.