A German-Turkish plan to stem the tide of migrants and refugees arriving in Europe has met criticism from rights groups and the United Nations, and faces political obstacles. But the plan, which calls for Turkey to stop migrants from crossing to Greece and readmit those who make the journey by sea in exchange for a range of EU benefits, may be the least-bad option for the region, says Gerald Knaus of the European Stability Initiative, a think tank focusing on EU enlargement. The critics overlook Turkey’s ability to handle the challenge, and the country, with EU help, is better positioned than Greece to care for large numbers of refugees, Knaus says. The German-Turkish cooperation driving the deal, he adds, could restore "a little bit of the trust that has been absent in recent years." 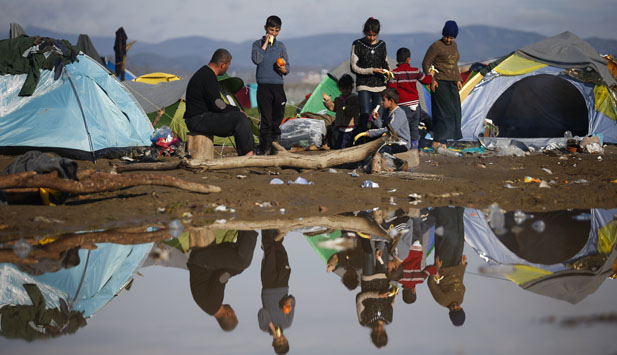 Back in September, the EU couldn’t reach a consensus on relocating 160,000 refugees across the bloc, and public animosity toward migrants and refugees from the Middle East only seems to have grown. Why would this resettlement plan work?

More From Our Experts
Liana Fix
Germany’s China Policy: Has It Learned From Its Dependency on Russia?
Stephen Sestanovich
Who Are Russia’s War Hawks, and Do They Matter?
Thomas Graham
Does Putin’s Gamble Make Russia’s War in Ukraine More Dangerous?

The idea of the resettlement plan is to disincentivize people from paying smugglers and risking their lives [at sea]. The relocation scheme would have been imposed on countries, which allowed some governments, such as the Visegrad countries [Czech Republic, Hungary, Poland, and Slovakia] to paint it as the entry point into a huge permanent relocation mechanism where decisions would be taken at the EU level, out of the control of individual states. That specter allowed a number of governments to mobilize their publics against this. It would be harder for populists to argue against voluntary resettlement, and those who do not want to take part would isolate themselves. The goal is to get back a sense of control over the EU’s external border, while preserving the commitment of those European states where there is public support for it to help take in refugees.

What would be the criteria for being selected for resettlement from Turkey?

They would have to be Syrians registered in Turkey before the end of last year, in order not to create a pull of people into Turkey. It would focus largely on families, which would preempt controversial debate on family reunification later.

“To have an effect on the incentives of refugees, the key would be that [the process] is fast and unbureaucratic.”

Otherwise, the criteria would be light. You would not require [lengthy] interviews or profiling. You would have security checks, which is important for public support: fingerprints, identity papers, to check if people are listed in any of the databases of European security agencies. But to have an effect on the incentives of refugees, the key would be that [the process] is fast and unbureaucratic. It would have to be faster than any resettlement that has been carried out in recent years by UNHCR, the United States, Canada, or any EU state.

More From Our Experts
Liana Fix
Germany’s China Policy: Has It Learned From Its Dependency on Russia?
Stephen Sestanovich
Who Are Russia’s War Hawks, and Do They Matter?
Thomas Graham
Does Putin’s Gamble Make Russia’s War in Ukraine More Dangerous?

Rights groups and the UN high commissioner for refugees have raised concerns over the one-to-one refugee swaps.

There are two parts to this criticism. The first one is: Is Turkey safe for refugees? More than a million Syrians had been in Turkey for many years. Because they spent years in Turkey already, you can assume they have been safe in Turkey, unless they have strong contrary evidence.

The notion of a safe third country does not mean blanket returns; that would be illegal under Greek and EU law. One of the challenges is to strengthen the ability of the Greek asylum system to address [tens of thousands of] asylum claims in a fast but fair manner.

If you look at the ability of the Greek state to look after refugees, particularly with numbers rising fast, it is hard to argue that it’s better for the refugees to remain there. If Turkey receives support, including [the EU’s pledge of] six billion euros over three years to fully implement all the public services enshrined in Turkey’s progressive new law on foreigners, this too will improve the conditions of refugees.

Does the Greek bureaucracy have the capacity to adjudicate these claims?

If Turkey agrees to accept people back and Greece is serious about doing this in line with its legislation, then the capacity of its asylum service is perhaps the crucial question. We recommend the EU consider a pilot project whereby asylum caseworkers from other countries might be temporarily integrated under the Greek authorities.

Turkey itself has been bearing quite a large burden in terms of Syrian refugees—2.7 million, by the UN’s count—and they’re likely to be a long-term presence. How well are they integrated into society?

It was only after 2014 that Turkish authorities, and an increasing number of Syrians, began to realize that a return to Syria was not coming any closer. In fact, since [Syrian President] Assad was reasserting his grip on parts of the country, the prospect of ever returning receded ever more. By the end of 2015 the Turks began to open the labor market formally and contemplate what kinds of investments would be needed.

The EU funding is sometimes wrongly presented as a dirty deal where Turkey gets money to keep refugees out [of Europe], when in reality the purpose of the money is [to support the refugees themselves]. It is to be spread over three years, a signal that Turkey expects people to still be there.

Has there been much social conflict in Turkey caused by refugee strains?

“Turkish society and political elites have shown a remarkable maturity on [the refugee] issue.”

What has been striking is the extent to which this hasn’t happened. In 2015, Turkey had two extremely contentious elections, but one thing no political party did was exploit the huge number of refugees. Turkish society and political elites have shown remarkable maturity on this issue. It’s all the more impressive by comparison to the behavior and rhetoric in a lot of EU member states, [some of] which seem to panic at the prospect of taking just two thousand refugees.

The agreement calls for the EU to open five new chapters in Turkey’s accession process, but Turkish accession seems like an unlikely prospect, given both the states of Turkish and European politics. (There are thirty-five different policy criteria, or "chapters," that applicant countries must meet to become an EU member.) Why then is opening these chapters so appealing to Turkey?

This is a rather strange debate, [since] opening chapters is an almost meaningless exercise, and there is almost nothing at stake. There’s no more money. There are no more meetings. There is no more progress. Turkey has, in recent years, made as much progress, according to the EU’s own assessment, in open chapters [as in other areas].

Opening chapters is political theater. Politicians pretend it’s progress. EU member states pretend that this gives them leverage to put pressure on Turkey. But the only thing that really matters for a country to join the EU is closing chapters. That depends on genuine progress.

Visa-free travel to Europe would be a much more concrete benefit for Turks.

Turks feel discriminated against—rightly, I think—as the only EU candidate negotiating for accession that doesn’t have visa liberalization. Compared to countries like Moldova, Albania, or Bosnia, which are much further behind in the EU accession process, Turkey has a much higher per capita GDP. It has a customs union with the EU, and it didn’t need visas until the 1980s. The Turks feel that it is long overdue, so they have consistently linked their willingness to readmit refugees to the visa requirement being lifted.

For the EU this is a moment of truth, because the EU has for years been promising the Turks that visa liberalization is possible. Last November, the EU has said that it might happen in October 2016. Now that Turkey has demanded the date be brought forward to June in return for Turkey immediately taking back refugees from Greece, we see that some EU member states were not very serious about this promise. They need to decide what they want.

Turkey, meanwhile, is widening its conflict in the country’s Kurdish southeast. Do Kurds who are Turkish nationals stand to lose from this agreement?

They would have the right to claim asylum, and the consideration of Turkey as a safe third country would not apply because they are Turkish nationals. But it is highly unusual for an EU candidate to have asylum requests in the EU, [much less] asylum requests that are granted. Visa liberalization could actually restore some EU leverage on the issue of human rights. The Turks would have a strong incentive to not have too many asylum claims made in the EU; that might jeopardize visa liberalization.

These talks come as Turkey has grown isolated in its neighborhood. Would this plan have an effect on Turkey’s relations with Europe?

Given Turkey’s increasingly tense relations with Russia and its own exposed position in a region that seems more dangerous than at any time since the end of the Cold War, Turkey concluded that a country like Germany, which played a key role in putting together the sanctions against Russia over Ukraine, is an important ally.

“Visa liberalization could actually restore some EU leverage on the issue of human rights.”

It makes sense for the Turks to help [German] Chancellor Merkel, who has not taken part in the refugee bashing or Islamophobic rhetoric that some political forces in Europe have employed. It’s in Turkey’s interest that such politicians remain influential in Europe. The new alliance of far-right populist parties, from [Marine] Le Pen in France to some of the Visegrad governments to the far right in Austria or the Netherlands, which is pro-Putin, anti-Turkish, and anti-refugee, constitutes a strategic threat to Turkey.

The investment Merkel made in meeting often with the Turks and showing understanding for their concerns over the refugee issue, and especially offering to not treat Turkey as sort of a dumping ground for refugees who reach Europe, but to offer to share the responsibility, is beginning to pay off. This isn’t yet a relationship of trust, but both sides recognize that their interests lead them to want to cooperate. And if that leads to results, a little bit of the trust that has been absent in recent years might be restored.