The nuclear deal inked by Iran and major powers in July has sparked debate not just about its nonproliferation provisions, but on the extent to which U.S.-Iran contacts might extend on other issues. Such major shifts are not yet likely as governments in Washington and Tehran prepare their domestic constituencies and foreign allies for the nuclear deal’s implementation, says James Dobbins, a senior fellow at the RAND Corporation, a U.S.-based think tank. The United States and Iran may partner in Afghanistan, where there has already been "implicit collaboration," but cooperation in Iraq will be challenging, and moving toward a settlement of Syria’s civil war will be even more so, says Dobbins. 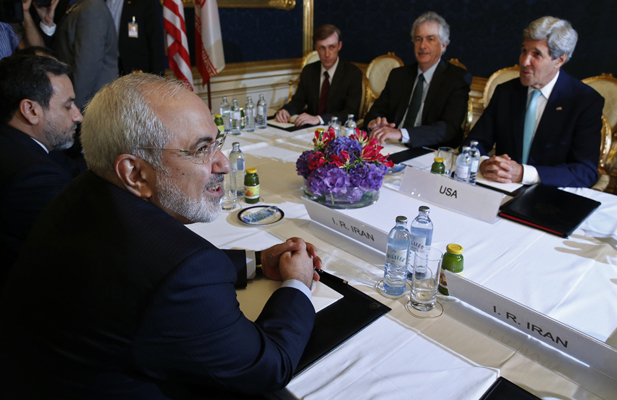 Iranian Foreign Minister Mohammad Javad Zarif meets with U.S. Secretary of State John Kerry at talks between the foreign ministers of the six powers negotiating with Tehran on its nuclear program in Vienna in July 2014. (Photo: Jim Bourg/Reuters)
More From Our Experts
Inu Manak
Outbound Investment Screening Would be a Mistake
Stewart M. Patrick
The G7, NATO, and the Future of the West
Ray Takeyh
Three Challenges That Are Testing Iran’s Regime

Has there been any diplomatic contact between the United States and Iran beyond the nuclear file since Iran and major powers signed the nuclear deal?

My sense is that both sides are spending most of their political capital reassuring their constituencies, domestic but also foreign. The United States is discussing increased arms supplies and other assurances with Israel and a number of the Gulf states. One would guess that the Iranians are similarly tending their relationships with Hezbollah, among others, as well as their domestic constituencies, assuring them that the agreement doesn’t mean changes in other aspects of their policy. I wouldn’t expect to see much in the way of expanded contacts between the two during this period, when the agreement is under scrutiny domestically, particularly in the United States, but also, to some degree, in Iran.

That said, we’ve seen a little bit of diplomatic movement on Syria, as regards both Iran and Russia, both of whom have been making some gestures toward renewing a diplomatic process with a view toward reducing the violence and ultimately ending the civil war.

"Both sides will proceed gingerly to explore what new possibilities might be opened as a result of the agreement."

I don’t want to read too much into it. The Syrian civil war has become so complex and multisided that it’s going to take concerted efforts over an extended period of time by [many countries] including Turkey and Saudi Arabia, as well as Russia and Syria. But it’s positive that there’s interest on the part of these two supporters of the Assad regime in restarting some kind of diplomatic process.

It’s also encouraging that the Gulf states have endorsed the agreement and are considering how to take advantage of the new situation. There’s been a little increase in diplomatic activity between Iran and Saudi Arabia and between Iran and a number of regional states that may see the agreement as a new starting point for relations.

Some Gulf Arab states—notably, Saudi Arabia—have taken a more aggressive posture in recent months. Could the nuclear deal lead to a lessening of regional tensions?

There’s always that potential, though I’d hesitate to predict it. But as Iran’s nuclear program recedes as a source of anxiety, however much it may be a concern in the longer term, there will be a possibility of turning to other issues.

Certainly it means that the bureaucratic and political capital both the Iranian and U.S. leadership have had to invest in the negotiations will now be available for other things. It’s likely that at least some of that can be turned to other issues where there may be converging interests.

You mentioned Syria, where Iran is a principal backer of President Bashar al-Assad’s regime. Iran had been disinvited from a previous UN initiative to find a political settlement to the civil war in 2014. Do you see the conclusion of the nuclear agreement as opening the way for Iran to be included in a multilateral process on Syria?

Two factors led to Iran being disinvited, and the agreement only addresses one of them. The Syrian opposition was opposed to Iranian participation and threatened not to come if the Iranians were invited. The agreement doesn’t solve that problem. The other problem was a disinclination on the part of the [Obama] administration to begin dealing with Iran as a more normal negotiating partner while the fate of the nuclear agreement was uncertain. Now it is plausible that the United States would see an advantage in having Iran participate and would seek to persuade others of that.

Could improved U.S.-Iran relations lead to cooperation in Iraq, where the two countries share some common interests?

The confluence of interests is principally the concern about the [self-proclaimed] Islamic State. There’s also an interest among both parties in holding Iraq together. I don’t think that Iran would like to see Iraq break apart or see an independent Kurdistan.

"It’ll probably be a while before CENTCOM and the Quds Force sit down together and plot their next strategic move [in Iraq]."

The effort to retake the parts of the country that are controlled by the Islamic State is clearly a common interest. But the degree to which we can collaborate there is complicated by the fact that the principal actor on the Iranian side is the Revolutionary Guard, particularly the Quds Force, and the principal actor on the U.S. side is the U.S. military—Central Command [CENTCOM]. It’ll probably be a while before CENTCOM and the Quds Force sit down together and plot their next strategic move.

At the moment, [U.S. and Iranian forces are involved in] deconfliction—so we don’t end up bombing them and they don’t end up bombing us—rather than coordination. It largely seems to go through the Iraqis, like proximity talks: the Americans are in one room, the Iranians are in another, and the Iraqis shuttle back and forth. One could imagine a situation in which U.S., Iranian, and Iraqi military officials are all sitting in the same room.

On Iraqi governance—the degree to which it is based on respect for minority rights and some degree of accommodation with Sunni interests—the Iranians have been less helpful. They’re aligned with more extreme elements within the Shia community, so a multiethnic, tolerant, inclusive state is an area where the United States and Iran probably don’t see eye to eye. Discussion between the two sides would be helpful.

What about in Afghanistan?

That’s where our interests are more fully aligned and where there’s been implicit collaboration. There’s a lot of discussion between the United States and Iran in multilateral settings, but there hasn’t been bilateral contact for a number of years. Iran has generally followed policies that are benign and consistent with our own. Once this nuclear agreement is in effect, that kind of collaboration could easily become more overt.

Both Iran and the United States supported the emergence of a government of national unity and pressed [Afghan President Ashraf] Ghani’s and [Chief Executive Officer Abdullah] Abdullah’s campaigns to come together. The Iranians were traditional supporters of the Northern Alliance, from which much of Abdullah’s political base was drawn.

Iran, like the United States, would be concerned about any Islamic State penetration into Afghanistan, and would be willing to exchange information about that kind of threat if it developed. While U.S.-Iran collaboration in Afghanistan is the easiest to imagine, it’s also not the most important because it’s implicitly already taking place.

The Wall Street Journal reported in June that Iran has armed the Taliban to counter militant factions affiliated with the Islamic State and counter U.S. influence.

Iran has traditionally provided substantial assistance to the Afghan government. It’s a major aid donor. Iran also hedges its bets. It maintains some contacts with the Taliban, and has provided some limited assistance. Pakistan, our ally, is a much more important source of support for the Taliban, but Iran isn’t completely free of that sort of hedging and double-dealing.

It’s not impossible that if Iran sees the Kabul government is faltering, it’ll recalibrate its interests and deal with the Taliban. But it was a strong opponent of the Taliban throughout the 1990s, and, on balance, Iran has been more helpful than not since 2001.

Will the domestic debates over the nuclear deal in both Iran and the United States constrain future diplomacy between the two countries?

Both governments are shoring up their right flanks. The Obama administration is taking the position that it’s not going to diminish its support for [U.S. allies in] the region, and that this agreement is focused exclusively on removing the nuclear threat and everything else will remain the same in terms of U.S. policy. The Iranians are saying the same thing.

Neither side is, at this stage, willing to stir up new controversy while the controversy associated with the nuclear agreement is still unresolved. There will still be considerable inhibitions in both capitals about too overt a normalization of relations.

Is the U.S. congressional debate giving Iranians pause about whether the United States can fulfill its diplomatic commitments?

Their assessment is probably similar to that of most observers, which is that the fate of the agreement in the U.S. Congress isn’t certain, but the hurdles that the opponents have to get over to actually require the president not to implement the agreement are pretty high.

I don’t think the U.S. debate would surprise anybody in Tehran. They’re aware of the polarized nature of our political process, and particularly of the strong antipathies that exist in our society toward Iran, as indeed exist toward the United States in Iranian society, based on historical grievances going back half a century.

What steps will you be looking toward to assess changes in the diplomatic landscape?

Washington and Tehran are likely to proceed cautiously, even once the agreement has begun to be implemented. If I was going to look for signs that this agreement had loosened the confrontations in the region, I would look less at what’s going on between Washington and Tehran and more about what’s going on between Iran and Saudi Arabia and some of the other Gulf states to see whether there’s been an increase in diplomacy, an increase in exchange of visits, or alternatively—and this is also a possibility, for instance, over Yemen—increased confrontation.