Since our August update, the eurozone crisis and poor global growth have fueled investor flight to dollars, despite the recent downgrading of the U.S. credit rating. As fund managers have moved money into dollars, withdrawing from emerging markets, dollar appreciation has meant that BRIC central banks need to intervene less in currency markets in order to keep their exchange rates competitive. While BRIC governments continue to accumulate U.S. assets, the pace has slowed. Four points stand out:

- Both the level and growth of China's reserves dwarf those of the other BRIC countries. Chinese reserve accumulation over the past twelve months exceeds Brazil's, Russia's, and India's stocks of reserves.

- Reserve growth slowed during the crisis of 2008 for all of the BRICs. In the past few months, a similar slowdown has taken place.

- Risky U.S. assets remain out of favor. During and after the financial crisis, the BRICs sought refuge in low-risk U.S. treasuries; they are sticking to this pattern now.

- Reserve growth is a byproduct of currency intervention, but its implications vary across countries. In China's case, reserve growth helps maintain an undervalued currency and hence a large current account surplus, fueling the imbalances that destabilize the global economy (see the Geo-Graphics blog post "China's Imbalances Are Bigger than Reckoned"). In Brazil's case, reserve growth helps contain its current account deficit in the face of strong investment inflows that threaten an overvaluation of the Brazilian real; thus Brazil's reserve accumulation arguably serves to reduce imbalances.

For a broader picture of foreign capital flows into the United States, please see our companion Chart Book here.

There is much talk about the BRIC countries as a group, but when it comes to financing the United States, China stands apart. 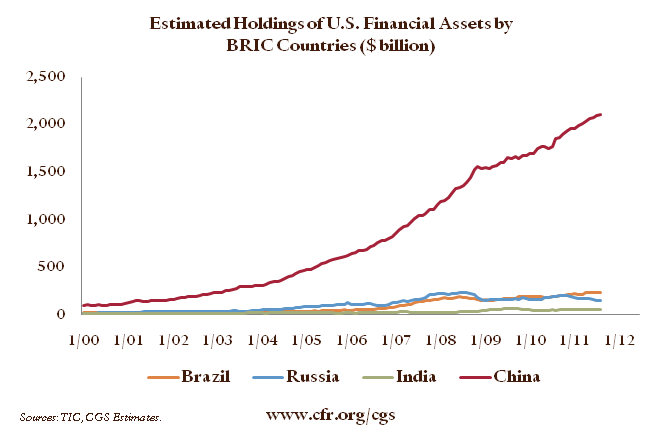 Chinese concern about the weakness of the U.S. dollar stems from the fact that the majority of the government's foreign assets are composed of dollar assets. However, the dollar share is falling. It stood at over 71 percent of the total in January 2005 but is only 60 percent now. 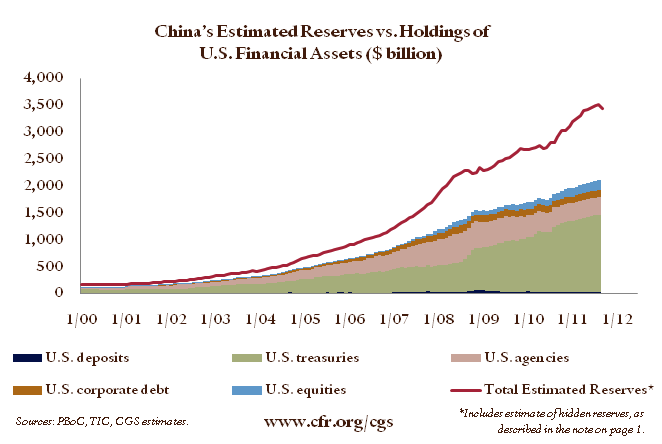 China's foreign assets grew at a slower rate during the crisis, but growth was still rapid. The bulk of the U.S. assets purchased by China are treasuries, unlike before the crisis, when Chinese official purchasers bought agencies, equities, and corporate debt. 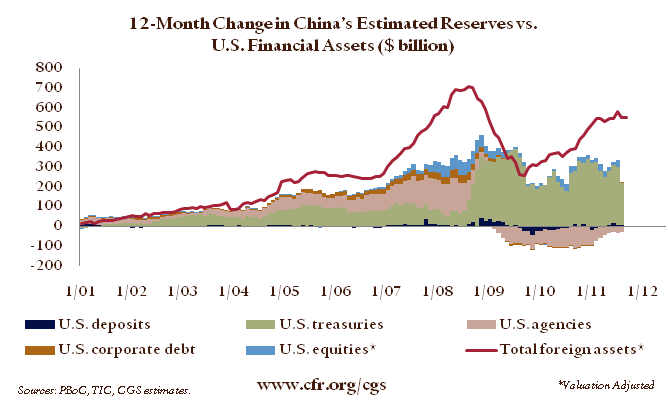 Brazil continues to keep most of its reserves in U.S. treasuries. Its holdings of U.S. corporate debt and U.S. equities are so small as to be virtually invisible in the picture. Before the crisis, Brazil's reserves were almost exclusively in U.S. financial assets. In the last two months, Brazil stopped accumulating reserves as the dollar rapidly appreciated against the real. 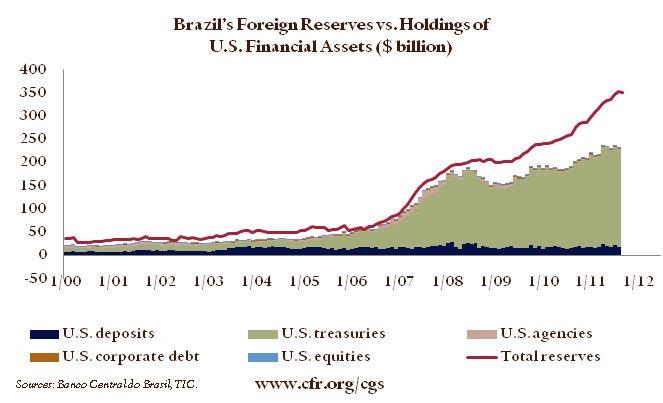 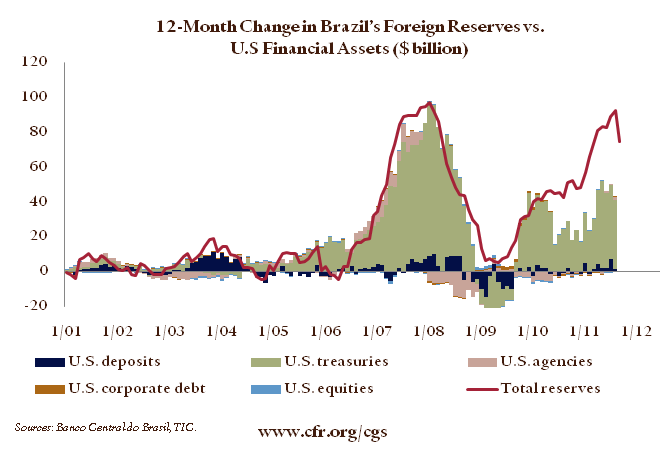 Russia's reserves fell sharply in 2008 and early 2009. By 2010, both total reserves and dollar holdings resumed their upward march. Reflecting its economic proximity to the eurozone, Russia began to diversify its reserves out of dollars in the mid-2000s; in 2007, the dollar share of reserves averaged 45 percent, down from 70 percent in 2005. 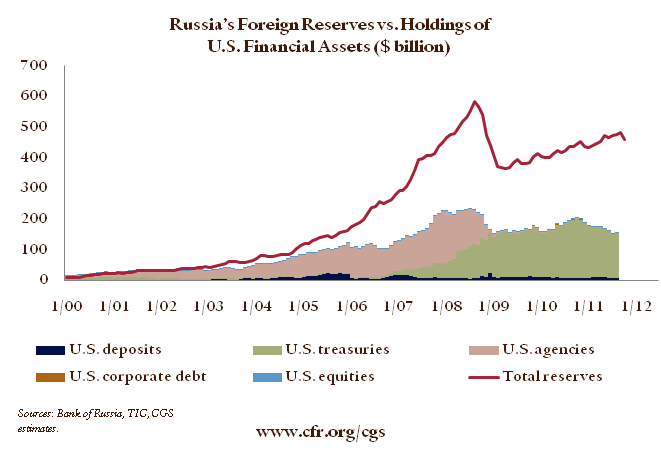 Even as its reserves fell in the crisis, Russia began to purchase U.S. treasuries, raising the money by selling all of its agencies (see the pink and green areas of the chart above). These purchases of U.S. treasuries have now leveled off. Indeed, Russia's total holdings of treasuries have recently decreased (green bars, below), likely driven by a decrease in holdings of short-term U.S. government debt. 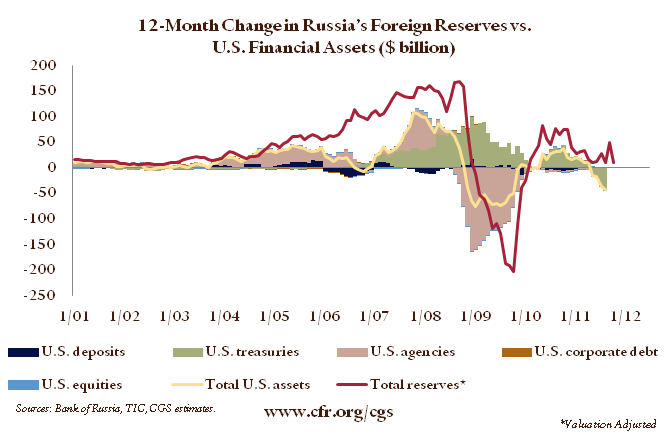 Although Russia's total reserves have been increasing since late 2009 (red line, chart above), recent change has been driven mainly by currency valuation, not purchases of reserves. Because Russia holds approximately 55 percent of reserves in non-dollar assets, its reserves measured in dollars rise as the dollar falls. The yellow line in the chart shows that Russia did not add U.S. assets as much as its total reserves accumulated. 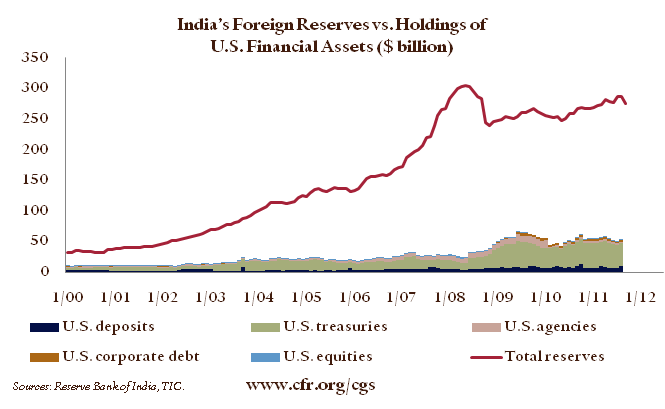 India's reserves are held mostly as bank deposits. A large share is likely held at the Bank for International Settlements. As a result, the U.S. data do not provide much insight into the currency composition of India's assets. The white space in the chart below, showing the large gap between reported dollar assets and total reserves, reflects this lack of information rather than large Indian nondollar holdings. However, the small portion that is observable in the U.S. TIC data suggests an increased appetite for U.S. treasuries after the crisis, following the pattern in China, Russia, and elsewhere. 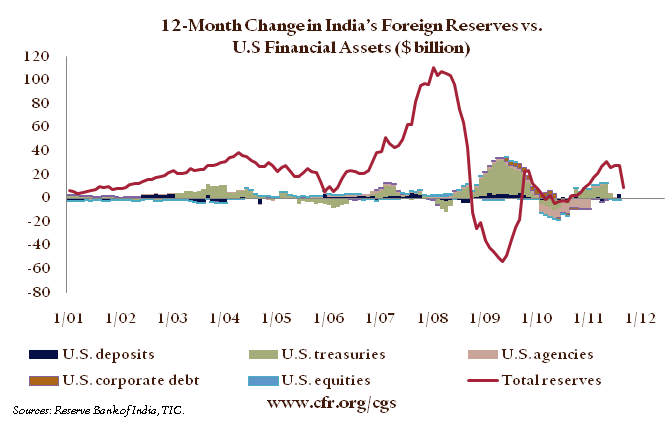 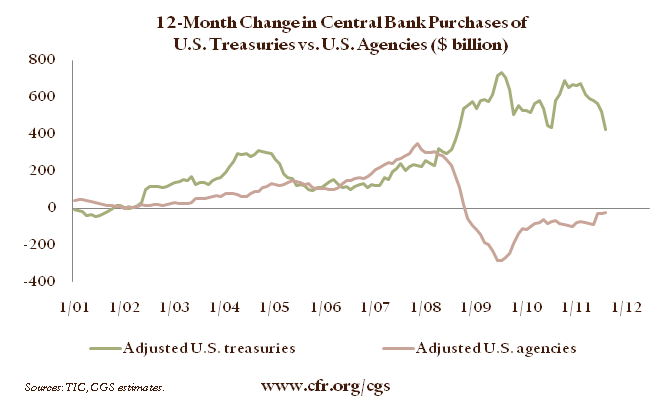 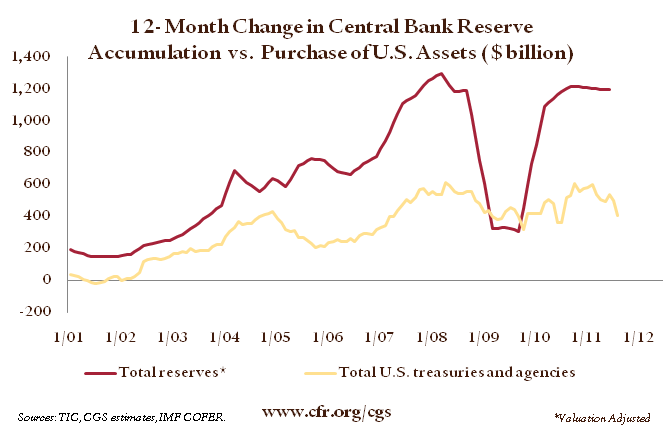 Note: Reserves data come from the IMF's COFER data series. The quarterly data have been adjusted to a monthly series. These data include all central bank purchases, not just those by the BRIC countries.

*A note on methodology: These charts are derived from reserve data produced by the BRIC central banks, from capital flows data produced by the U.S. Treasury in its International Capital System series (TIC), from the International Monetary Fund's (IMF) Currency Composition of Official Foreign Exchange Reserves (COFER), and from Greenberg Center for Geoeconomic Studies estimates. China's reserves data have been adjusted to include China's hidden reserves, which include an amount listed on the balance sheet of the People's Bank of China under the heading "other foreign assets," and an estimate of foreign assets held at the China Investment Corporation (China's sovereign wealth fund). The U.S. TIC data have been adjusted to include purchases made through London and Hong Kong. These adjustments anticipate revisions that are likely to be made when the Treasury's annual survey is published; by looking at the pattern of past revisions, it is possible to estimate future ones. Unless otherwise noted, foreign asset growth or reserve growth has not been adjusted for valuation changes due to currency moves.