Senator Coons discusses his recent congressional delegation to East Asia and provides his perspective on U.S. policy in the Asia-Pacific and the future of U.S.-China relations.

Event by Christopher A. Coons

In this latest episode of the Net Politics podcast, I sit down with Christopher Painter, coordinator for cyber issues at the U.S. State Department.

Researchers and practitioners should pay greater attention to the human beings at the center of conflict politics.

Cybersecurity
The State of the Field of Cyber Conflict

Compared to the rise of air and nuclear power, for example, research into cyber has yet to identify “settled truths.”

According to Sahara Reporters, on October 27 the Shia were marching from Suleja to Abuja in preparation for a religious event called Arbaeen Symbolic Trek. The marchers apparently took a route that had not been approved by the security services. When the soldiers and police intervened, marchers responded by throwing rocks. The army and police responded with live ammunition.

Mitigating potential communicable disease in refugee populations is a subset of efforts for human rights, equality, and dignity. A basic multilateral framework could improve health care in these situ…

A poster showing the picture of Nigerian president Goodluck Jonathan is seen at the launch of his campaign in the central city of Lafia, Nassarawa state February 7, 2011. (Afolabi Sotunde/Courtesy … 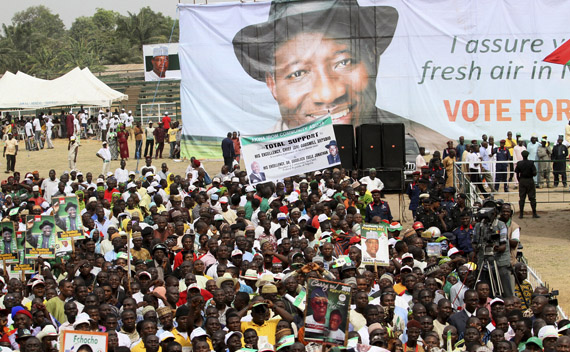