That quote doesn't come from me -- but from someone with a bit more authority: Jim Caron, co-head of global interest rate strategy at Morgan Stanley (quoted by Michael MacKenzie in Monday's Financial Times).    Interestingly enough Caron's estimate of the impact of Asian [read central bank] demand on yields is lower than some other academic and market estimates -- he puts the impact at around 60 bp.

Caron's quote ranks up their with one of my other favorite quotes from the past few weeks -- Kevin Giddis of Morgan Keegan and Co argued that, for the bond market, China's investment in Blackstone was like "kind of like the butcher finding out his best customer...is now a vegetarian." (as reported by Michael Hudson on May 29th)

I actually don't think China is close to becoming a bond market vegan.   Not with a $22.4b monthly trade surplus and close to 30% y/y export growth in May.   China's trade surplus, current account surplus and reserves are all rising strongly this year.  Fan Gang -- who is in a position to know -- is now predicting China's reserves could hit $1.6 trillion in 2007, and top $2 trillion in 2008.

The $3b China invested in the Blackstone is roughly equal to my estimate of China's average bond purchases over any two working days: Think $40b a month in reserve growth, $30b in a month in dollar purchases, 20 working days  a month ...

The pace of China's reserve growth has essentially doubled over the past year, rising from $20b a month to around $40b a month this year.  Justin Lahart's take on Blackstone -- "if you are paying for the fuel, you might as well get some of the heat " -- was perfect.   Right now, China can buy a "Blackstone stake" a month AND still buy far more bonds every month than it did in 2005 or 2006.

I don't see many other Asian economies adopting bond-free all vegetable diets either.   All indicators suggest Asian economies are still adding to their reserves quite actively.  India added $3.5b to its reserves in the last week of May.   Korea has been buying dollars steadily over the past month.  Malaysia has intervened all year long -- at least until the past week or so, when private inflows turned to outflows.

Indeed, the possibility that the bond conundrum might come to an end at a time when Asian reserve growth seems to be far closer to a peak than to a through is sort of a conundrum for those -- myself included -- who thought Asian (and petro-state) reserve growth was the fundamental cause of the conundrum.

That is probably why I really liked Mackenzie's FT article.   He argues that the Asian bid for long-term bonds disappeared in large part because Asian central banks started buying the short-end of the curve.

Compounding matters was a distinct lack of Asian buyers at the sales of new Treasury debt in May.  MacKenzie:

“The auctions were extremely weak and Asian buyers preferred Treasury bills [with maturities of less than one year] rather than the 10-year,” said Tom di Galoma, head of Treasury trading at Jefferies & Co. “We rose above 4.78 per cent and there were no buyers, then we went above 4.9 per cent and people expected that would be the high for this year.”

Early last week, the yield on the 10-year threatened to break above 5 per cent and many investors expected such a move would finally attract buyers, particularly from the hitherto quiet Asian accounts.

But it seems Asian accounts (meaning China?  Is anyone else half as a big a player?) stayed on the sidelines.   Bond yields broke 5.02 -- a huge trend line -- and then, well, things really started to move.

The Mackenzie story isn't inconsistent with a story that emphasizes changing expectations about the Federal Reserves likely rate path as a core driver of the bond market, or even with a story that emphasizes the impact of stronger global growth on US rates.   The shift in overall interest rate expectations just had an impact when the expectations on Asian accounts -- read central banks -- shifted.   Once Asian central banks decided that they preferred the short-end of the curve (with its higher yields) to the long-end of the curve (with lower yields but the prospect of gains should rates fall), long-term rates had to rise.

If this story is true, it supports -- rather than contradicts -- the thesis that central bank demand has had a meaningful impact on US rates.   Central banks take a week or two off.  Rates gap up.  Private market participants (Caron of Morgan Stanley) who were betting on the central bank bid had to reverse course.  The FT reports that Caron went from buying at 5% (in the hope of selling to Asian central banks) to selling at 5.02% ...

We don't really have a good fix on just how important China has been to the Treasury and Agency market over the past year.  Or at least those of us who work off the US data rather than the flows going through investment banks don't have a good fix on the scale of Chinese purchases.   The last survey showed about $190b in Chinese purchases of long-term debt (mostly Treasuries and Agencies), and net Chinese sales of short-term US debt.   If you read between the lines of the latest survey data, it is pretty clear that China was more or less the only big official buyer of "Agency MBS" -- MBS with an agency guarantee -- between June 2005 and June 2006.  (See table 4 on p. 12: total official holdings of Agency MBS are $118; total Chinese holdings are $107b).   China doesn't just impact the Treasury market.

But that $190b flow came when Chinese reserve growth was tracking at about $250b (on a lagging 4 quarter basis).   It is now tracking at about $350b (looking back) -- perhaps a bit more if you think a lot of the 100b plus in Chinese purchases of debt securities in the 2006 balance of payments represents state banks playing with dollars borrowed from the central bank.  And looks set to rise even more through the end of the year.

When the survey data for June 2006 to June 2007 comes out,  my guess is that total Chinese purchases will be north of $250b.   And based on the anecdotes reported in the FT, I wouldn't be totally surprised if China end up adding to its short-term holdings, not cutting them.

But if others have a different take, I am all ears. 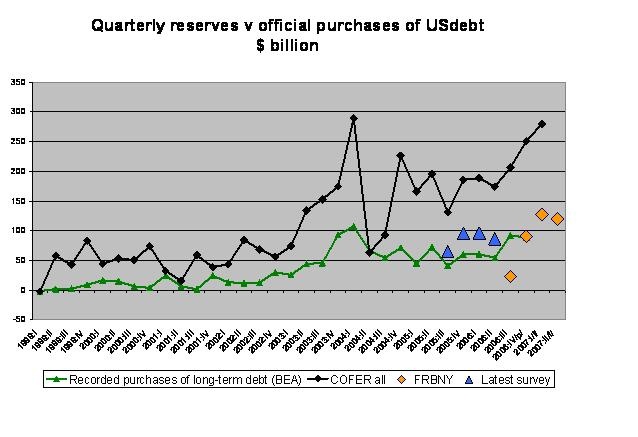 A host of models predicted -- based on variables like inflation rates and the US fiscal deficit and the like --  bond yields of around 6%.   There was a large gap between market rates and the rates that emerged from the models when US rates were close to 4.5%.    But the gap remains even with rates at around 5%.    Look at chart 13 in this Sebastian Becker/ Deutsche Bank report (Hat tips, Mikka Pineda and Global Liquidity Blog; chart 15 is also interesting).   Nominal bond yields usually track nominal GDP growth relatively well.     But recently they have been below nominal GDP growth in both the US and Europe.   The gap has fallen in the US largely because nominal GDP growth has fallen -- not, until recently from a rise in nominal bond yields.    A recent Goldman research report also showed that its bond models still find US rates lower than the model would expect. Even at 5%.  Credit Agricole's analysis also implicitly suggests that rates should be much higher.  They put the conundrum at over 100 bp earlier in the year.   US rates have increased since then, but not by 100 bp.

I don't think the conundrum isn't over.   Not yet.   The US is still financing a very large external deficit at a relatively low rate.

UPDATE: In today's Wall Street Journal, TJ Marta of RBC Capital Markets is quoted to the effect that Asian central banks have been big buyers of long-dated Treasuries:

"T.J. Marta, fixed-income strategist at RBC Capital Markets, expects longer-term yields to continue to move higher for three reasons: investors abandoning the notion of the Federal Reserve needing to cut rates to shore up weakness in housing; increasing investor sensitivity to global inflation; and a waning of foreign buying interest, particularly in Asia, for Treasurys.

The latter two reasons are particularly bad news for long-dated bonds. They have been the main area of interest for Asian buyers and they suffer most from inflation worries, as inflation eats into bondholders' fixed returns over time."

Last week&#8217;s data flow supported the US adjustment optimists &#8230; not the pessimists