The US trade deficit -- which is a good proxy for the current account balance (the income surplus offsets a transfers deficit) -- is now around $40b a month. At its peak it was more like around $60b a month. That implies, if nothing changes, the 2009 current account deficit would be around $500b, down from a peak of $700b.

In fact, if nothing changes the trade balance balance might improve a bit more. The US imported an unusually large amount of oil in December, and that rise in volume obscured some of the benefits from the fall in the price. The US paid an average of around $95 a barrel for its imported oil in 2008, but only about $50 a barrel in December.

Remember this the next time someone argues that the US will be borrowing more from the rest of the world to finance its fiscal deficit: the total amount the US borrows from the world is defined by the current account deficit and the current account deficit clearly went down in the fourth quarter even as the US fiscal deficit (and the Treasury’s borrowing need) soared. That is because the rise in government borrowing offset a contraction in private investment and a rise in private savings.

Of course, it would be far better if the global economy adjusted through strong growth abroad not a collapse in private US demand growth. But, well, we are where we are. Y/y nominal non-oil imports were down about 10% in December. Nominal export growth was down a bit less, more like 8%. 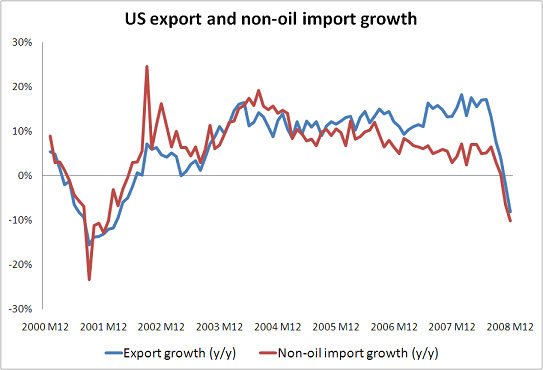 Real goods exports and real goods imports are both falling. The improvement in the non-oil trade balance now reflects a faster fall in imports than exports. 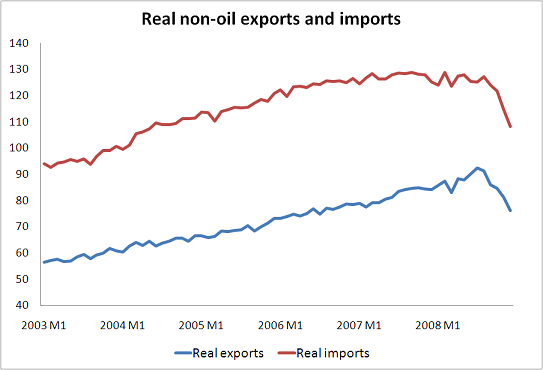 US real import growth has been weak for a while now. Until a few quarters ago though real export growth was strong. Not any more. 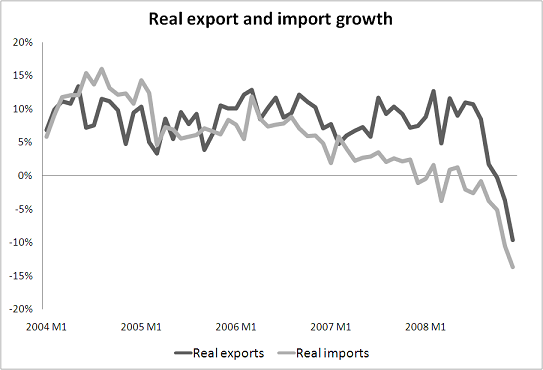 If the stabilization of US imports reflects the stabilization of the US economy then it would be good news. But a faster stabilization in the US than in the world -- together with a strong (ish) dollar would also push the non-oil deficit back up over the course of 2009. Forecasts that the US deficit will fall to 2.5% to 3% of GDP strike me as optimistic.

The net result: I expect a slowing global economy to take a toll on US exports and do not expect much additional improvement in the US current account balance. I’ll be watching closely to see if the markets are willing to finance a growing deficit .... and, for that matter, if China is willing to finance a growing US deficit and add to its already considerable exposure.

The extreme symmetry captures something real. Deficits and surpluses are shrinking globally now that the price of oil is at levels that roughly cover the oil exporters imports.* Right now China’s (growing) surplus is clearly the main counterpart to the United States’ (shrinking) deficit.

* Actually is a bit lower than the price most oil exporters need, so some oil exporters will need to sell their existing assets to cover their import bills.