At least for the US. And I would bet globally as well, though global financial flows fell a couple of quarters after private flows to the US. Remember decoupling?

In some sense the sharp fall in financial flows isn’t news. Capital flows generally are more volatile than trade flows. Ask any emerging economy. But the magnitude of the swing in capital flows is still striking.

Inspired by Dr. DeLong’s post showing US exports and imports over time, I used the January trade data to estimate the q1 fall in exports and imports (down 22% and 27% respectively, y/y and in nominal terms) and I plotted trade flows against private capital flows (I reversed the sign on outflows, and subtracted "private" treasury purchases from the inflow data*). The last data point on the capital flows side is from the fourth quarter, but it still makes for a striking picture. 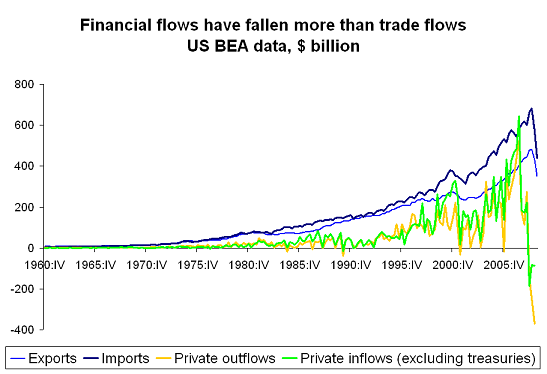 Of course, presenting any series in billions of dollars can be a bit misleading -- though it isn’t an exaggeration to say that the fall in private capital flows associated with the current crisis (which Macro man, in an excellent post, really should be compared to other epic crashes) has been sharper than the fall associated with the first Gulf war, or 9.11. That brings to mind Warren Buffet’s comment about the power of financial weapons of mass destruction

More importantly, the picture doesn’t change all that much is the quarterly data is scaled to GDP.**

Five things in this chart jumped out at me.

One: Exports didn’t really rise relative to US GDP from 1980 to 2005. They stayed constant at around 10% of US GDP. The fact that exports were not growing implies that employment in export sectors wasn’t growing. That presumably has something to do with declining support for "trade" among manufacturing workers. The US spent 25 years paying for more imports by exporting paper, not goods.

Two: Exports fell in relation to GDP in the early 80s, and again in the late 90s/ first part of this decade. This clearly correlates with periods of dollar strength. There is a reason why nearly all econometric studies find that the real value of the dollar has a bigger impact on exports than imports. The recent uptick in exports relative to GDP corresponds well with the lagged impact of the dollars’ post 2002 slide.

Three: Import growth -- including oil imports -- was strong during the course of the most recent cycle. The pace of increase in imports to GDP from 2002 to 2006 was faster than than the average increase over the past twenty five years. Chalk that up to a boom in consumption induced by borrowing against rising home values. It is true that the boom in consumption and imports linked to the rise in equity prices in the late 1990s and associated rise in oil prices was sharper, but it also didn’t last as long.

Four: Capital flows -- inflows and outflows -- have generally been rising over time, both absolutely and relative to trade flows. Compare the 70s, or even the 80s, to the naughties. That is the substance behind all the talk of financial globalization.

Two other critical points are obscured in a graph showing gross flows, but show up clearly in a plot that shows net private capital flows (inflows - outflows) against the trade balance (with the sign inverted, so a rise in deficit shows up as a large absolute number) 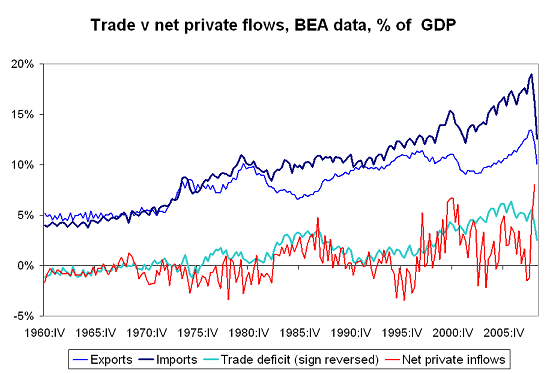 First, the rise in the trade deficit -- and rise in US imports relative to GDP -- in the last eight years didn’t correspond with a rise in net private demand for US financial assets. That makes the expansion of the US deficit from 2002 to 2006 quite different from the expansion of the deficit in the early 1980s -- or the expansion in the late 1990s. Official inflows made it possible for the US to sustain the rise in imports that was associated with the housing boom; had those flows not been around, interest rates would have had to rise to attract private flows -- and the housing boom couldn’t have gotten so large. The excesses in the US financial sector and housing market simply were not, in aggregate, financed by strong private demand for US assets abroad.

Second, somehow the collapse of capital flows in the fourth quarter of 2008 produced a larger net inflow into the US than the surge in demand for US assets associated with the dot.com bubble. That, put simply, is why the dollar rallied in the crisis. Americans withdrew funds from the rest of the world faster than foreigners withdrew funds from the US.

It is easy to attribute the fall in financial and trade flows to protectionism, of various kinds. I don’t think that is quite right though. The fall in financial flows reflects the collapse of financial intermediation, both inside the US and globally. At least for the US, the fall in cross-border financial flows clearly preceded large capital injections into the banking system, and the associated debate over financial protectionism. Moreover, I would posit that financial flows would be even smaller (and the reversal in flows even greater) if governments had not stepped in after Lehman’s failure. The fall in trade flows reflects the collapse in demand associated with the collapse of financial flows, which made it impossible for sectors and countries that previously had borrowed heavily to spend more than they took in to keep on doing so. Protectionism can make things worse, but the fall to date is primarily the result of the financial sector’s collapse. It was made, so to speak, on Wall Street -- not in Washington.

* A large share of private purchases of Treasuries from mid 07 to mid 08 will be reattributed to the official sector when the data is revised. And some "private" purchases in 05 and 08 likely came from the Gulf’s central banks, especially SAMA (which may make use of private fund managers for a portion of its Treasury portfolio). More generally, this excludes "safe haven" flows.

** I scaled the raw balance of payments data -- i.e. no seasonal adjustment -- to GDP, which is seasonally adjusted. I wanted to preserve the seasonal volatility in the trade data (q1 imports in particular are low) in the chart.

Sign of strength or evidence of weakness? China’s dollar reserves